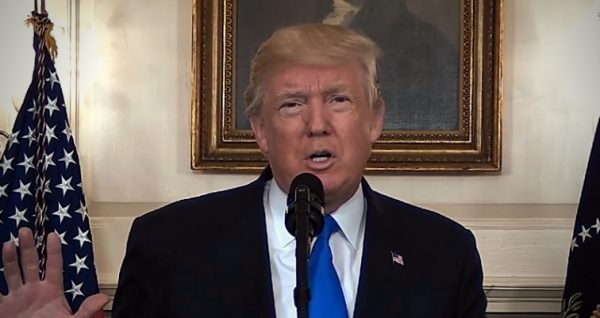 Left-wing Democrats have purposely conflated President Donald J. Trump’s statements on the campaign trail and actions since entering the Oval Office to protect the country and enforce the law as “racist” and “bigoted.”

In particular, Trump’s attempts to use federal law to restrict people from terrorist-infested countries entering the U.S. until they can be properly vetted has been portrayed by Democrats and their sycophantic supporters in the “mainstream” media as the president hating on “Muslim-majority countries.”

Protecting us from potential terrorists is religious bigotry to the Left.

Also, Trump’s pledge to “build a wall” along the U.S.-Mexico border while enforcing existing immigration laws is racist — not the president upholding his oath of office to uphold every single law on the books, no matter how many Democrats hate it.

The Left and their media allies have hammered these two narratives relentlessly — from the moment Trump announced he was running for president until the present, when Democrats and “civil rights leaders” pledged over the weekend to boycott an event Trump planned to attend.

As reported by The National Sentinel, Trump on Saturday visited the new Mississippi Civil Rights Museum, but had to do so essentially in private because petulant Democrats threatened to boycott the event if he had come to the public grand opening.

Except that racists don’t go to civil rights museums for grand openings. Or for any other reason.

However, because of the boycott threat by African-American congressmen and civil rights groups, the administration arranged for Trump to visit during a private screening of the museum, before the larger, public grand opening.

It was a classy thing to do for a bunch of classless race-baiters.

“I think this was a diplomatic effort that will help solve this issue,” former Mississippi congressman Mike Espy told NBC News.

Trump had been invited by Gov. Phil Bryant.

“The fact that the governor of Mississippi invited him was sort of a surprise to us on the committee,” said Espy. “We didn’t find out that the president had agreed to come until two or three days ago.”

It shouldn’t have mattered, but the only reason it did is because civil rights leaders and Democrat Congressmen John Lewis and Bennie Thompson threatened to stay away if the president came.

“President Trump’s attendance and his hurtful policies are an insult to the people portrayed in this civil rights museum,” the lawmakers said in a joint statement.

No, fellas, what is insulting is your ridiculous petulance and your misrepresentation of this president and his policies. Because again, a racist president would not have accepted an invitation to visit a “civil rights” museum in the first place. (Related: EATING THEIR OWN: University administrator slams LGBTQ center for being “too white.”)

But the president did go, and he delivered respectable remarks while paying homage to a real civil rights icon, Martin Luther King, Jr., not a bunch of pretenders like Lewis and Thompson.

“These buildings embody the hope that has lived in the hearts of every American for generations,” Trump said. “The hope in a future that is more just and more free.”

He also noted that King was “a man who I studied and watched (and) admired for my entire life.”

“It was my great honor to celebrate the opening of two extraordinary museums-the Mississippi State History Museum & the Mississippi Civil Rights Museum. We pay solemn tribute to our heroes of the past & dedicate ourselves to building a future of freedom, equality, justice & peace,” Trump tweeted afterward.

It was my great honor to celebrate the opening of two extraordinary museums-the Mississippi State History Museum & the Mississippi Civil Rights Museum. We pay solemn tribute to our heroes of the past & dedicate ourselves to building a future of freedom, equality, justice & peace. pic.twitter.com/5AkgVpV8aa

There isn’t a thing wrong with opposing Trump or any president on the basis of disagreeing over political objectives and preferences. But there is a lot wrong with the incessant race-baiting of a president who so obviously isn’t one, because doing so takes away from real instances of racism.