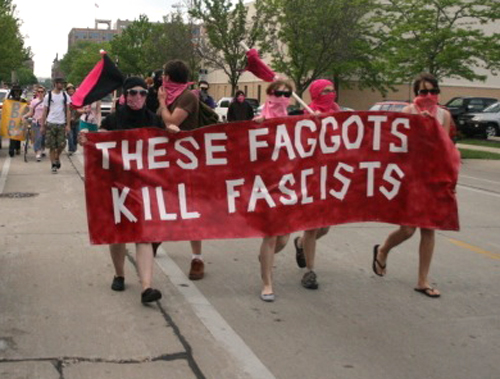 The Assistant Director of “LGBTQIA Programs & Services” at the University of Missouri – Kansas City (UMKC), Jonathan T. Pryor, has published a personal manifesto outlining all of the ways that humans who refuse to accept their natural biological dispositions are still being “triggered” by the everyday world around them. Two of these triggers apparently include the LGBTQIA Center at UMKC, as well as the “rainbow flag,” a common symbol of LGBTQ-etcetera – both of which Pryor claims are offensive because they’re too “white.”

Pryor, whose skin color is ironically about as pasty white as it gets, explains in his paper how the LGBTQIA building where he works on campus is in close proximity to other buildings and spaces that apparently make his cohort of gender non-conforming snowflakes feel “uncomfortable.” One such space is the student center where Greek Life flags are displayed, as well as all of the Greek houses located just outside of campus – two symbols of “straightness” and “whiteness” that Pryor feels violate his LGBTQIA safe space.

Non-straight students of all rainbow stripes at UMKC claim to be suffering great hardship merely at the sight of what they claim are symbols of “homonormative whiteness,” Pryor laments. In his view, anything that’s not LGBTQIA represents the “upholding (of) power for White, Christian, able-bodied, and middle-class people.” In fact, the mere existence of non-LGBTQIA anything is more than Pryor and his fellow brain-addled bigots can bear, which is why this collective of crazies is basically now calling for their removal in order to pacify their need to exist in an even more insulated bubble of non-reality.

“By featuring these organizations in such a visible way, the campus is communicating the importance of fraternity and sorority membership,” Pryor whined to Campus Reform, a news outlet that covers this type of insanity for the amusement of the non-brain-damaged. “What would it mean for the campus to hang all the LGBTQ pride flags in that space? Questions likely not considered in such a heterogendered environment,” Pryor added, echoing the sentiments of a fellow LGBT-whatever student at UMK by the name of “Jackson,” a “queer, black, trans man” who reportedly also takes offense at the presence of Greek Life flags in the school’s student center.

Many non-LGBTQIA folks find militant gays, lesbians, and trannies ‘uncomfortable’ – should they be accommodated, too?

But that’s not all, folks. Pryor’s ongoing triggering episodes are also caused by his school’s gyms and locker rooms, which like most gyms and locker rooms throughout history are visibly dominated by athletes who are fit and straight. The fact that a majority of the individuals who use UMKC’s gyms and locker rooms aren’t obese slobs with confusing body parts offends Pryor and his fellow gender-confused psychopaths – which, by the looks of Pryor himself, definitely explains a lot.

Getting back to these offensive spaces, Pryor argues that they’re just “not particularly accessible” to LGBTQers because they invoke the “pressure to be fit” and the “expectations of manliness.” Another UMKC student named “Jeremy,” who identifies as a white, cisgender male, expressed similar intolerance for men’s locker rooms, which he claims “represent a space dominated by straight cisgender men, where masculinity is rewarded, heterosexuality is supported by sexist and homophobic comments, and athleticism is attributed to a specific body and masculinist nature.”

God forbid that good-looking, athletic men who prefer women be afforded a space in which to change their clothes and enjoy “guy time” with their fellow athletes. Many of them likely don’t feel particularly comfortable having to see crybaby losers like Pryor and his ilk, who presumably (based on their complaints) simply don’t have what it takes to live up to higher standards like fitness and not feeling the need to replace their penises with vaginas.

You can be sure that if UMKC’s football or soccer teams put together an “academic” paper demanding that all LGBTQ weirdos be removed and put out of sight in order to make everyone else on campus feel more comfortable, all hell would break loose and the apocalypse initiated. And maybe this is exactly what needs to happen to finally put the out-of-control, LGBTQ-etcetera mafia in its place.