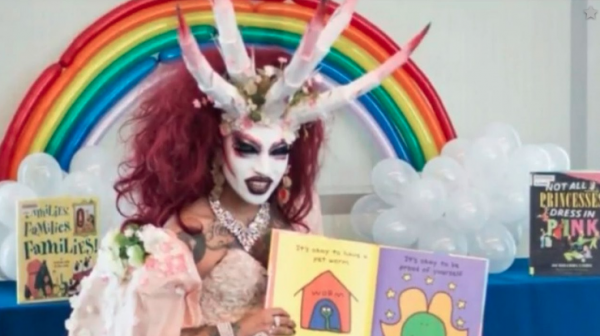 Does anyone else feel that the liberals have taken this whole “diversity” thing a bit too far?

During a recent event at the Michelle Obama Neighborhood Library in Long Beach, California, children sat and listened to a story read not by an inspirational figure like a pro athlete or a successful businessman, but rather by a horned, demon-like drag queen – you know, because its important to be inclusive or something.

The drag queen, who was reading at the library as part of LGBTQ History Month and goes by the name Xochi Mochi, called the event “one of the best experiences I’ve been given as a drag queen.” Mochi continued, “It’s so important to have representation and normalize all the letters in LGBTQIA+ in everyday lives. I saw so many excited faces it filled my heart with so much joy and hope to come back again soon! Thanks again to everybody who made this opportunity a reality and make such a successful LGBT event … .” 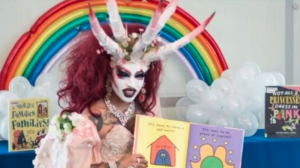 Still, having a drag queen dressed up in white face paint, red hair and lipstick with five horns sticking out of his head isn’t exactly what most people would consider to be “normal.” Furthermore, while Mochi mentioned how important it is to “normalize all the letters in LGBTQIA+,” this too is an area of controversy. There are a number of words in that acronym, such as “transgender,” that we should not be trying to normalize because, well, they’re not normal.

From a parental standpoint, it’s extremely hard to believe that sending your kid to a library named after one of the most divisive First Ladies in American history to listen to a story read by a demonic drag queen is a crucial step in the development of said child. Although left of center parents claim that they are teaching their kids about diversity and how to be accepting towards people not like them, “diversity” will not help them get a job and make money as they transition into adulthood.

And therein lies one of the central problems with what kids are being taught both at home and in the classroom: There is always more of a focus on things related to liberalism and social justice than on things that really are essential to the child’s upbringing.

Back in 2015, it was revealed that Fairfax County Public Schools were modifying their curriculum to teach students that there is no such thing as someone who is purely a boy or purely a girl. Instead, the schools insisted that gender is fluid, and that it has much more to do with how one feels on the inside rather than science and biology. As you can imagine, parents were outraged.

“Parents need to protect their kids from this assault,” said Andrea Lafferty, president of the Traditional Values Coalition. “Who could imagine that we are in this place today – but we are.”

Lafferty further criticized the school district’s changes to the curriculum, warning that it was bringing our country one step closer towards the deconstruction of gender. “At the end of this is the deconstruction of gender – absolutely,” Lafferty said. “The majority of people pushing (this) are not saying that – but that clearly is the motivation.” (Related: There has been a huge increase in the number of young people being indoctrinated by gender identity propaganda.)

And these two stories are just the tip of the iceberg. From gender neutrality to safe spaces, white privilege to inaccurate accounts of American history, colleges and universities seem to care more about raising a generation of radical Leftists and social justice warriors than they do about preparing young people for the future. And quite frankly, that is something that all Americans, regardless of political affiliation, should resent.