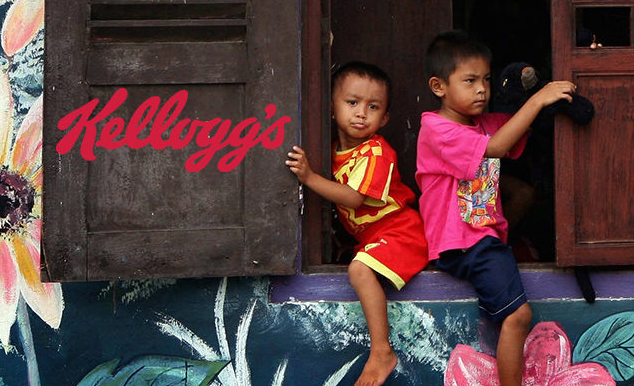 Social media platforms like Twitter and Facebook have grown into soapboxes for the offended — and there is no shortage of things for the special snowflakes of the world to be aggrieved over. It often seems like the court of public opinion has taken over; any slight, no matter how small or unintentional, can earn you scorn from millions of people — provided your so-called wrongdoing has been posted to someone’s Twitter feed. Kellogg’s just learned that lesson the hard way after their Corn Pops cereal box animations were “deemed” racist by a comic book writer.

Saladin Ahmed, writer for Marvel Comics’ Black Bolt series, took to Twitter to declare that Kelloggs’ cereal box art was “teaching kids racism.” The company’s Corn Pops box features a number of animated Corn Pops, including one brown Corn Pop, who is depicted as a janitor. According to Ahmed, this little animation is subversive enough to indoctrinate children into being racists. The comic writer tweeted, “hey @KelloggsUS why is literally the only  bown corn pop on the whole cereal box the janitor? this is teaching kids racism.”

hey @KelloggsUS why is literally the only brown corn pop on the whole cereal box the janitor? this is teaching kids racism. pic.twitter.com/Nh7M7IFawW

In a reply to his original post, Ahmed went on to add, “”yes its a tiny thing, but when you see your kid staring at this over breakfast and realize millions of other kids are doing the same…”

Kellogg’s replied to Ahmed’s message a few hours later, informing him that they had no intention of being offensive and stating the company believes in “diversity and inclusion.” The cereal-maker also revealed that they would be changing the Corn Pops artwork because of Ahmed’s tweet. Their statement read, “Kellogg is committed to diversity & inclusion. We did not intend to offend – we apologize. The artwork is updated & will be in stores soon.”

A spokesperson from Kellogg told USA Today, “We take feedback very seriously, and it was never our intention to offend anyone. We apologize sincerely.”

Kellogg isn’t the only brand to face backlash in their attempts at being more “inclusive” and “diverse.” Getting lambasted over social media for any number of so-called offenses has become commonplace; it seems that the more offended you proclaim to be, the more “right” you are. This self-righteous pity party has gone so far, Google has even added an “offensive flagging” feature, which utilizes quality reviewers who flag content they find unpleasant.

One of the biggest concerns with continuously catering to the demands of these “snowflakes” is that there is seemingly no end to what these people may find offensive. In September, the hysterical race to be offended got so bad, college students at Ole Miss went on a rampage over a banana peel left in a tree. As Natural News writer Tracey Watson explains, a student that was unable to locate a trash can (for whatever reason) threw a banana peel into a nearby tree. Alpha Kappa Alpha president Makala McNeil, the current leader of a traditionally black sorority, spotted the banana peel and believed that its placement in a tree carried some sort of “racial element.” An upcoming event for the sorority was even canceled, because students were so “upset” by the banana peel.

In 2016, Princeton University introduced a policy banning the use of gendered language on campus — and there is undoubtedly more lunacy to come.

The game of “political correctness” has surely spiraled out of control — just ask Dove. The body care company just came under fire for an ad meant to show their product was fit for all women, but ended up being decried as “racist.”