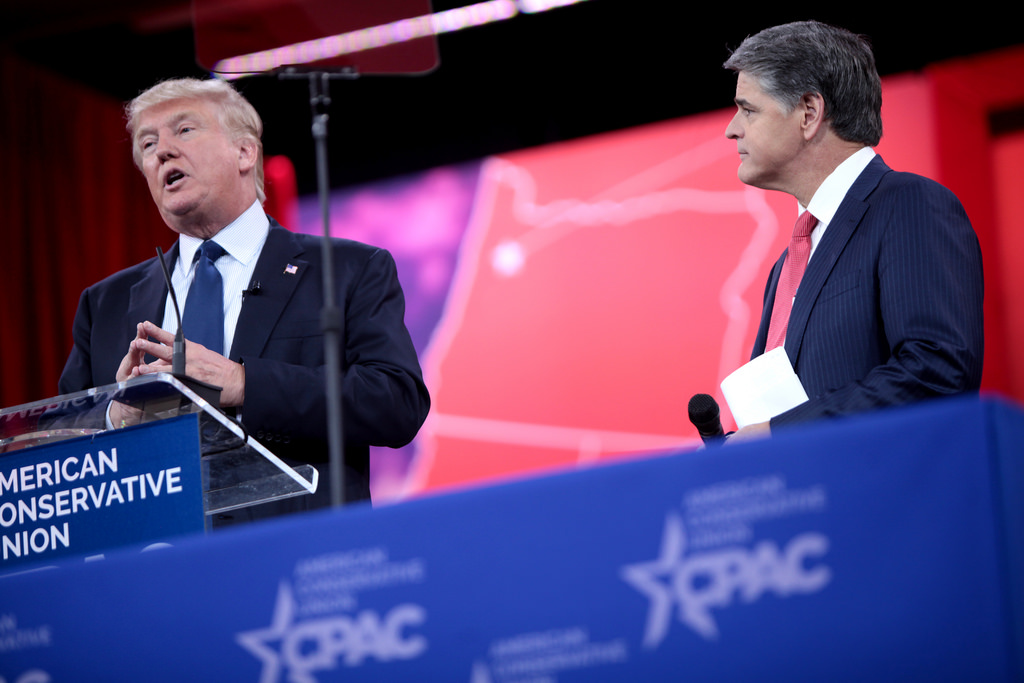 Several Left-wing groups aligned with the Democratic Party have launched an all-out assault on conservative pundit and Fox News host Sean Hannity in a bid to decimate his advertising base and push the most pro-Trump TV host off the air.

Media Matters, a communistic organization that is well-funded by Democratic supporters, has been hounding Hannity’s advertisers for months on end, attempting to persuade them to abandon a well-watched political news and opinion program just because it’s not uber-liberal.

But that group, which was founded by Leftist Clinton sycophant David Brock, is far from the only organization pressuring Hannity’s advertisers.

As The Daily Caller notes, the Democratic Coalition Against Trump, a ‘resist’ organization whose leaders include long-time Democratic operatives and politicians, launched FireHannity.org in June with a singular objective: Silence one of the most popular voices of political opposition on TV and the radio by getting his advertisers to bail on him.

Leaders of a similar campaign called #GrabYourWallet have been organizing boycotts of companies that carry Trump products or otherwise work with Trump businesses. They expanded that effort, which has been going on for over a year, to include a boycott campaign of companies that advertise on Hannity’s shows.

The organization’s website includes a fill-in-the-blank script, along with phone numbers and emails for various companies’ public relations divisions, to make it as easy as possible for opponents of Trump and Hannity to inundate companies’ inboxes with threats of boycotts.

In addition, the Democratic Coalition Against Trump has launched an assault on Hannity’s advertisers as well. On the FireHannity.org site, there is a list of “companies that advertise on Hannity’s Fox News and syndicated radio program — said to be the second-most-popular on the air — with phone numbers along with tweeting and email links.

“Hit these companies where it hurts most — their profits,” the commie site states. “Let them know you will never be a customer as long as they continue to support Hannity.”

Because to the Left, Hannity should never be allowed to support his family while doing what he wants for a living because he simply supports the ‘wrong’ president.

The website claims its call for a boycott is nothing short of payback for Hannity’s call for a boycott campaign of Left-wing MSNBC host Rachel Maddow’s nightly program. (Related: Health Ranger calls out Sean Hannity, Rush Limbaugh and Dan Bongino for “free market” mistake that pushes pharma monopoly.)

But that’s not accurate. While Hannity did briefly call for a similar boycott campaign, it was only in response to Media Matter’s first calling for a boycott against him.

In addition, the Alt-Left commie activists have also sullied Hannity’s reputation to his advertisers.

Also, operatives for Media Matters have accused the Fox News host of defending child sex abuse, which he has never done. The accusation stems from Hannity’s interview with Judge Roy Moore, who is currently a U.S. Senate candidate from Alabama, after allegations surfaced that he allegedly had inappropriate sexual contact with a 14-year-old girl when he was 32.

“Hannity has explicitly said that anyone guilty of what Moore is accused of doing has no place in politics, and he aggressively pressed Moore on the subject during a radio interview Friday,” The DC reported.

Unfortunately, the largely social-media-centered campaign has been effective in cowering some advertisers into abandoning their relationship with Hannity’s program. We’ll list those America-hating companies in a separate article, and if you feel strongly enough about it, perhaps you can boycott them for leaving Hannity.

J. D. Heyes is the editor in chief of TheNationalSentinel.com and a long-time contributor to the Natural News network of sites.