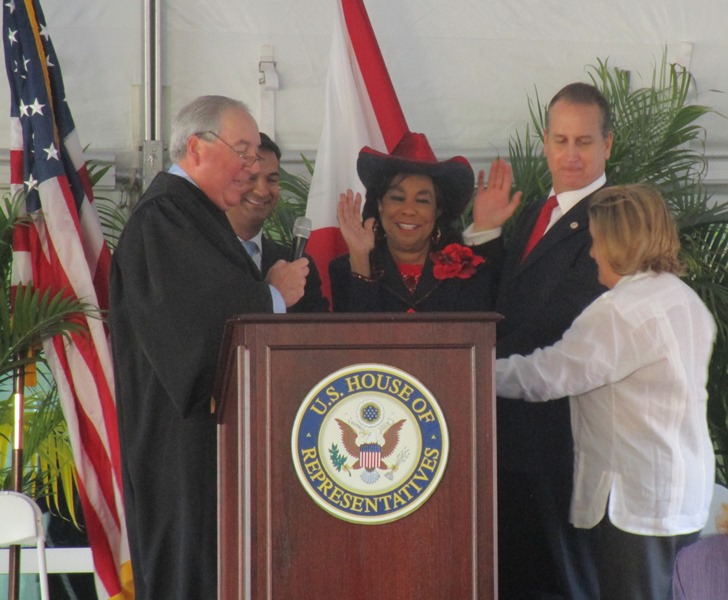 The insane Left has started another senseless fight with President Donald J. Trump and this time in a sick and twisted manner: Rep. Frederica Wilson, D-Fla., is politicizing the death of a U.S. Army Special Forces soldier in order to score points with constituents.

The cowboy hat-wearing weirdo is claiming that the president was “insensitive” to the fallen soldier’s wife in a phone call to her where Trump was attempting to share his condolences over the death of Sgt. La David Johnson, one of four Green Berets killed in an ambush in Niger last week.

Wilson said that Trump was ‘dismissive’ of Johnson’s widow, Myeshia, saying that her husband “knew what he signed up for” when he enlisted, adding that “when it happens it hurts anyway.”

“Yes, the statement is true,” said Johnson’s mother, Cowanda Jones-Johnson. “I was in the car and heard the full conversation. Not only did he disrespect my son,” she said, but also the soldier’s father and his widow.

For her part, Wilson — who few Americans have heard of before today — is now getting her face plastered over as many networks as possible, especially the far-Left kook #TrumpHate networks like MSNBC and CNN. And what’s her message? The same thing virtually every Democrat and GOP opponent of Trump has been saying now for months: That he’s ‘crazy’ and, therefore, ‘must be removed from office.’ In an interview on CNN, for instance, Wilson — in total disrespect of the leader of the free world — accused him of having “a brain disorder and he needs to be checked out…” And remember, mind you, this goofball wears blingy, sequined cowboy hats like 24-7.

Trump is refuting her, however, tweeting Wednesday morning that Wilson “totally fabricated what I said to the wife of a soldier who died in action (and I have proof).”

This brouhaha smacks of being manufactured for political purposes. (Related: HATE on display: School librarian rejects donation of books because they came from Melania Trump)

What makes me say that? Because Craig Gross, whose son was Cpl. Frank Robert Gross, told CNN that Trump’s “words are basically being taken and misconstrued.”

“President Trump is doing a lot of good things as far as Gold Star families are concerned,” Gross said. “I believe that if you interviewed him personally, one on one, you would find that he is very, very empathetic and very compassionate, not only toward Gold Star families but also in regards to our active duty.”

As a former member of the U.S. military who served in Afghanistan, I agree with Gross. You do know what you’re “signing up for,” especially these days when U.S .military operations around the world have dramatically increased and there is still active combat in a few places like Iraq, Syria and Afghanistan.

So like I said, this just smacks of political opportunism — and maybe even some charges of racism for good measure.

And by the way, those accusing Trump today are totally letting it slide that, once upon a time, in a cheap, political bid to hide the human cost of war in Iraq and Afghanistan, the 44th president — as always in conjunction with the corrupt establishment media — may have conspired to hide from Americans the pictures, footage and news coverage of fallen U.S. troops returning home in flag-draped caskets.

Mind you, Obama’s defense secretary, Robert Gates, lifted a ban placed on such coverage in 1991 under then-President George H. W. Bush early in Obama’s first term. But as CNN’s Jack Cafferty noted in September 2009, the number of media outlets showing up to cover the return of fallen American troops dropped to just one — The Associated Press — by the end of the year.

Why was that, he asked rhetorically, given that the other outlets “protested President [George W.] Bush’s continued ban on showing flag-draped coffins returning to the U.S.”

There can only be one answer: Obama didn’t want it.

As for Trump, Wilson’s and the Johnsons’ claims that he doesn’t care about their loss is just ridiculously unbelievable.