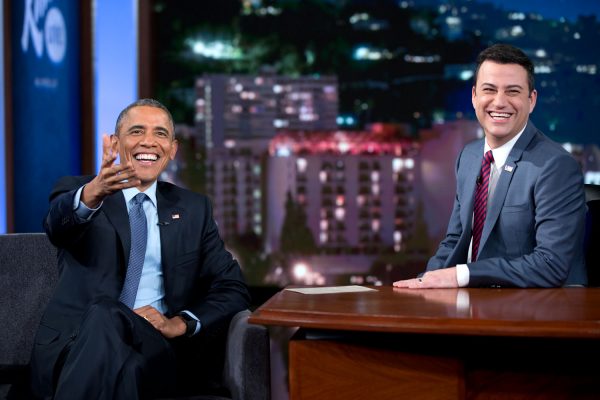 When late-night TV came into its own, hosts like Jack Parr, Johnny Carson, and Tom Snyder were pithy, relevant and entertaining. They told great jokes that were clean. They conducted probing interviews. They were irreverent. They were bold. But most of all, they were inclusive. No matter your political stripe, you felt you could watch these and other late-night hosts in an environment conducive to everyone.

Not anymore. Today we have nothing but Alt-Left partisan hacks posing as late-night TV hosts, who daily berate half or more of the country, belittle their opinions, mock and deride them as stupid, racist, bigoted nativists reminiscent of Hitler’s Brown Shirts (actually, it’s the Left that resembles them, but I digress).

While all of them — Stephen Colbert, Seth Myers, Jimmy Fallon and Jimmy Kimmel — are equally offensive to Republicans, conservatives, and supporters of President Donald J. Trump, it is Kimmel who is becoming the anti-GOP, #trumphating champ.

And those who mock the mocker are beginning to take notice. As reported by Truth Revolt, for the past couple of weeks Kimmel has been crying a lot during his opening monologues, primarily during talks about socialized medicine and mass shootings. It’s caught the attention of conservative Los Angeles-area street artist Sabo, who is wondering whether Kimmel is suffering from some sort of hormone imbalance:

On Thursday in West Hollywood near the celebrity’s home, posters appeared on bus benches and sign posts of Kimmel wiping a tear from his eye with a suggested renaming of his show: The Jimmy Kimmel Estrogen Hour. Mock movie posters for the ‘90s film Cry-Baby replaced Johnny Depp’s mug with Kimmel’s crying face.

Eventually, Kimmel saw some of the Sabo-created sign-art on a park bench and had someone take a picture of him flipping Sabo the middle-finger, then sent it to a friend at The Hollywood Reporter so it would get published.

That’s pretty typical behavior for lib ‘entertainers’ like Kimmel; they can dish it out, but boy, do they ever have trouble taking it.

But the point is, late-night TV has become a sewer — a toilet filled with vile, rank, Left-wing hate against all things Trump, all things conservative, and all things Republican, all while liberal Democrats and their far-Left donors get a pass, no matter what they do.

Take the budding sexual harassment scandal involving Hollywood mega-producer Harvey Weinstein. After The New York Times reported that he paid off scores of women to keep a lid on their accusations, and that Weinstein would hit on women he invited up to his hotel room under false premises — including once asking actress Ashley Judd if she would watch him take a shower — the late-night hypocrites were silent on what would have been a mindless, lecturing hatefest had Trump or some other ranking member of the GOP been involved in something similar. (Related: Flashback: How Jimmy Kimmel SPREAD disease by pushing vaccines that shed live viruses.)

As for Kimmel, you may recall his past disgusting behavior, such as his mocking of vaccine-injured children. As Natural News founder/editor Mike Adams, the Health Ranger, noted in March 2015:

In a stunning demonstration of demeaning hate speech targeting children who have suffered brain damage from vaccines, comedian Jimmy Kimmel unleashed a satire comedy hit piece that, fifty years ago, would have almost certainly seen Kimmel making fun of black people. Twenty years ago, he would have been making fun of gay people. But today, in 2015, Jimmy Kimmel directs his ignorance, bigotry and demeaning hate speech toward vaccine-damaged children who are now labeled “anti-vaxxers.”

And speaking of being unable to take criticism or differences of opinion, Kimmel also recently threatened violence against Fox News Channel host Brian Kilmeade after the latter corrected him over Kimmel’s criticism of a recent GOP-sponsored Obamacare repeal bill.

Late-night TV is certainly not for everyone anymore. But the worst of really bad TV is a self-absorbed, self-righteous coward named Jimmy Kimmel.