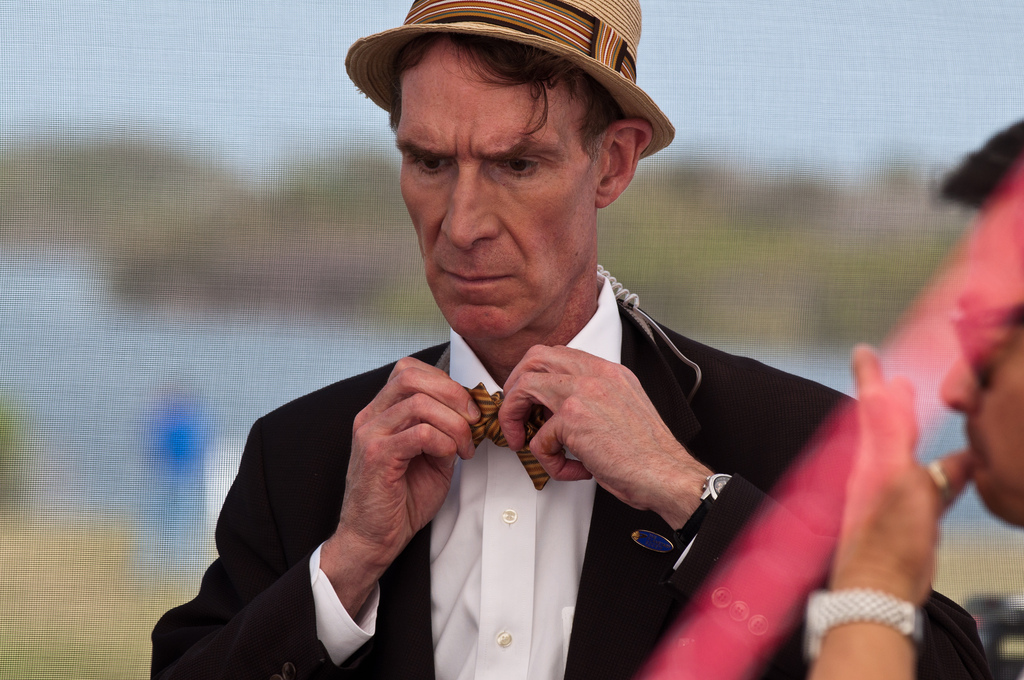 If you’re a far-Left “progressive,” this won’t matter to you because you’re more than likely also a member in good standing of the Church of Global Warming and Climate Change, but TV personality Bill Nye really isn’t a “science guy.”

And he sure as the world isn’t a trained climatologist or even meteorologist. He’s a huckster who doesn’t have a clue what he’s talking about when he discusses things like climate change other than what he’s read from other far-Left scientifically challenged researchers who are also members in good standing of the Church of Global Warming and Climate Change.

So really, it should come as no surprise that his idiocy regarding the recent hurricanes that have battered Texas and Florida has been called out by real climate scientists who understand that the climate and weather patterns have always changed and it has never been related to any human activity.

As reported by Truth Revolt, Nye — like other Left-wing nut jobs — couldn’t let a good storm go to waste. No, he and the other non-climatologist goofballs in the entertainment world immediately sought to politicize the tragedies and claim that once-in-century storms Harvey and Irma are just the latest evidence of human-caused climate change/global warming.

In an interview with the disgraced Dan Rather last week, Nye said that the strength of both storms “is almost certainly associated with global warming.”

Almost certainly. Almost. See, it’s “almost” because there is no proof of what he says and no way to ever prove it because it’s BS.

“As the world gets warmer and there’s more heat energy in the atmosphere, you expect storms to get stronger,” the non-expert in weather and climate patterns said. “You also expect ocean currents to not flow the way they always have. That will make some places cooler and some warmer… We’re all gonna pay for Harvey, we’re all gonna pay for Irma one way or another. So…anyway, the more heat energy in the atmosphere strengthens the storms — as you would expect.”

How does Maue know? Because he’s actually educated in the field. He’s a research meteorologist with the libertarian-leaning CATO Institute and an adjunct scholar. By comparison, Bill Nye, one-time stand-up comedian, got his degree in mechanical engineering from Cornell. I’m not saying he’s not a smart guy, just that he’s no climate scientist and never has been, so he has never had any real credibility on the subject. He just mouths what other PC researchers and global warming hoaxers say, and — as Maue noted — he can’t even parrot what he’s read elsewhere without getting it wrong. (Related: Bill Nye’s logic: Rape, murder and pedophilia should be legal because ‘You can’t tell people what to do!’)

Nye’s first big job after Cornell was working for Boeing, where he invented a hydraulic resonance suppressor tube that was used on 747 jetliners.

According to Maue’s bio, he has “developed and maintained a popular weather maps and climate data service based on the world’s best numerical weather prediction systems” and “researched extratropical and tropical cyclones, utilizing mesoscale models and large reanalysis datasets, and published multiple peer-reviewed articles.

“After his Ph.D. in 2010, Maue was awarded a National Research Council postdoctoral associateship at the Naval Research Lab in Monterey, California where he focused on global weather prediction and verification,” his bio continued, as quoted by Truth Revolt.

So, there are those big, fat, huge, glaring differences.

Like most other members of the Church of Global Warming and Climate Change, Nye is a believer in what does not exist and never has existed: A connection between changing weather patterns and human activity. Massive storms like Harvey and Irma were occurring millions of years before the first coal-fired power plant churned out electricity or gasoline-powered automobile ever hit the road.

No amount of parroting the hoax by a fake science dude is going to change that fact.