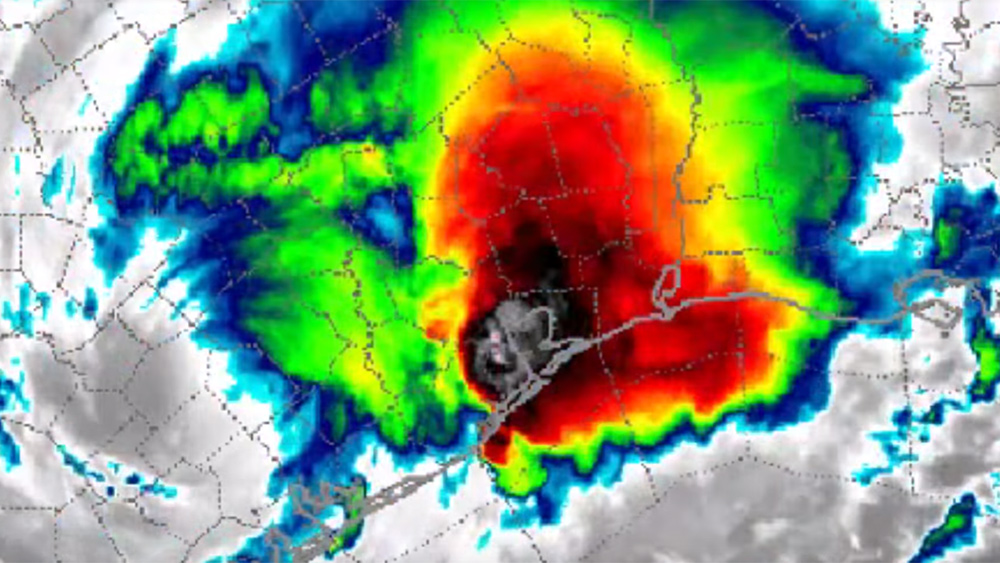 Earlier this week, we posted one of the most intriguing articles the internet has seen all week. Entitled “Weather wars” theorists claim Hurricane Harvey was engineered, “steered” toward Houston as a “weather terrorism” weapon, the article has already garnered over 400,000 views (and rising).

The article covered the rising interest in a concept called “weather wars,” which asserts that Hurricane Harvey and other storms are in essence “weaponized” through artificial augmentation, direction control and other factors. The article documented two key U.S. patents which describe advanced weather control technologies. It also shared several videos, including one from WeatherWar101, a website that’s gaining popularity among weather war analysts who say that Harvey was weaponized and directed as a kind of weapon of mass destruction.

WeatherWar101 took issue with some of the statements in our story — pointing out, for example, that they are not “Sofia Smallstorm” — and the founder of WeatherWar101 has contacted Natural News in an effort to get some statements corrected. We are now in the process of inviting WeatherWar101 for a full interview to cover everything they want to cover. This interview can be a written interview, an audio interview or a video interview (their choice), and if they agree to this interview, we hope to ask them lots of questions that readers have also been asking us.

As I said in the previous story, I’m no expert in weather modification, so my entire approach to this is with an open (but skeptical) mind. If I made any factual errors in the previous story, those errors were entirely accidental. I’d love to get the record corrected and let WeatherWar101 explain their theories about what’s happening. At the same time, as an active laboratory scientist, I will of course ask lots of skeptical questions.

There does seem to be compelling visual evidence that something very strange is happening with these storms. For example, look at the artificial cloud creation happening at the 5:40 mark in this new video that was just posted by WeatherWar101:

As this video clearly depicts, something is obviously adding a tremendous volume of vapor / clouds to the Harvey storm as it’s strengthening: The video says that without this augmentation, Hurricane Harvey would have fallen apart on its own. It was the augmentation, we’re told, that added strength to the hurricane and turned it into a weapon.

More than that, it irrefutably illustrates that not only is it manmade, the inflicted misery is far beyond intentional. Even after the first night of Harvey’s landfall, the complete destruction of Rockport, and two feet of flooding is Houston, the perpetrators were far from satisfied with the devastation they caused. If the perpetrators had any semblance of mercy or human decency, they simply would have allowed Harvey to dissipate as it was already doing (illustrated in the first satellite series in this video), and allowed the victims of this disaster to begin trying to recover their lives. Instead, they deliberately refueled this storm system with massive On-Land Water Vapor Generation (illustrated and proven by the tell-tale Raid Evaporation Bursts which are uncontestably manmade), causing the worst night of flooding in Houston for the entire event.

The video does appear to show many examples of “rapid evaporation” that seem to be adding significant water vapor to the storm system. According to WeatherWar101, the 50 inches of rain that devastated the region were at least partially augmented in a deliberate effort to worsen and “weaponize” the storm.

What do you think about all of this?

Personally, I’m intrigued by all this, just like most of you. We already know that in the 1940s, scientists harnessed the power of the atom to turn high-density elements into weapons of mass destruction. It’s called the “atomic bomb.” We also know that weather control and modification technology does exist at some scale; that’s been widely documented and even covered in media reports (such as the rain generating technology near Dubai).

We also know that Hurricane Harvey exhibited some highly unusual tracking behavior, such as heading inland at high speed, stalling, reversing course, then hanging out at precisely the worse location to allow a catastrophic downpour to hover over Houston for days on end.

Still, observation of a catastrophe is not proof that it was engineered. The idea that such storms could be augmented, controlled or weaponized is, of course, an extraordinary claim. And extraordinary claims require extraordinary evidence as a general rule. Yet, people like WeatherWar101 and Dane Wigington at Geoengineering Watch seem to be offering increasingly compelling pieces of evidence that support their claims.

So we’re inviting WeatherWar101 for an interview to tell his story and share what he knows. We’ll share the interview with you so that you can decide whether you think his theories have merit or not. In the mean time, here’s another new video from Dane Wigington from Geoengineering Watch called “Engineered Climate Cataclysm.” We’re also open to interviewing Wigington if he wants to join us for a chat. This issue of weather weaponization needs to be thoroughly discussed in a more open forum, I believe. After all, Al Gore says we control the weather all the time. He calls it “climate change.” So why can’t we openly discuss deliberate weather control technologies, too?