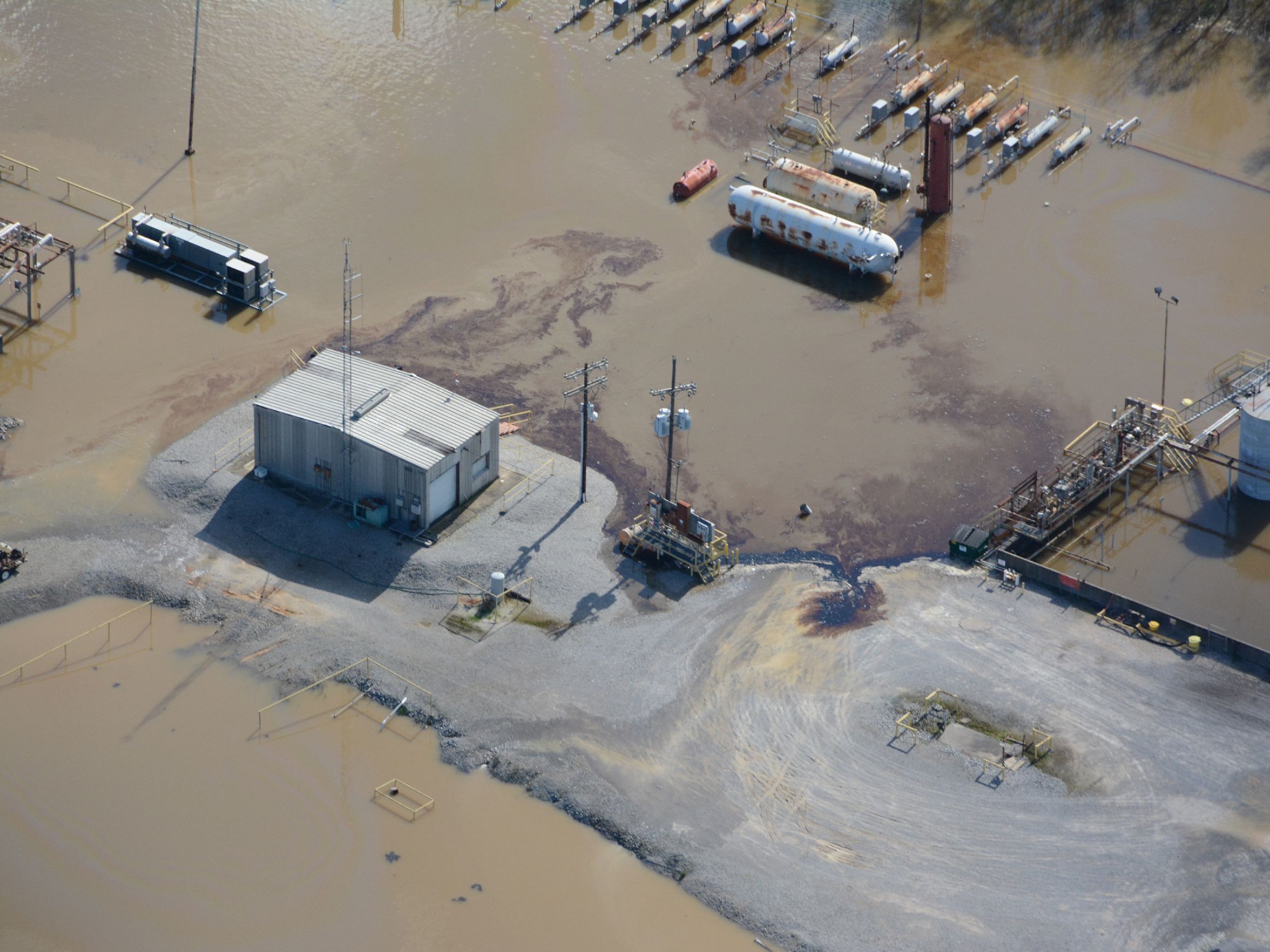 Price gouging is now rampant across the Texas flood zone, according to multiple local news reports, with cases of bottled water selling for $99 and a gallon of gas now fetching as much as $10. Dozens of hotels stand accused of hiking room rates by as much as 300%, and more than 500 price gouging complaints have been filed with the Texas Attorney General, according to a CNBC news report.

Without thinking a single rational thought about the topic, everybody assumes rising prices is automatically bad. But if the goal is to bring more supplies to those in need, rising prices is precisely the correct answer to invigorating supply chains and speeding the arrival of necessary supplies that can save lives, as you’ll see here.

While the Texas AG is promising to prosecute price gougers with fines of up to $20,000 per incident, the inconvenient truth in all this is that demand ultimately sets market prices for all goods and services. The higher the demand, the higher the prices surge. This market mechanism, by the way, has a powerful upside: As prices surge, entrepreneurs are instantly motivated to increase the supply by bringing more supplies to the disaster area, thereby filling the need of those who are willing to pay the heightened prices. In other words, if a family is dying to death from dehydration, is it better that they die while the government destroys the supply chain by artificially controlling the price, or is it better that they live because they paid $99 for a case of water that some profit-seeking entrepreneur got delivered through hell and high water? Higher prices motivate market forces to supply those in need.

“Price gouging” can be viewed in two different ways, you see. On one hand, you can view it as “exploiting the victims” by charging them more money. On the other hand, it is a simple economic fact that artificially controlled prices always result in supply shortages, and those supply shortages end up harming or even killing people. That’s why Joe Jarvis at The Daily Bell correctly writes, “Be Thankful for Price Gouging in Houston,” pointing out that allowing market rates to drive prices ensures greater supply of the most-needed items that can save lives.

If you think price controls save lives, then you haven’t paid attention to Venezuela, where government price controls on all food necessities have resulted in mass starvation and routine dumpster diving for food. If governments could create supply by lowering prices, then logically everyone could be made instantly nourished by the government setting the prices on all food items in the grocery store to one penny per item. Yet such an absurd edict would accomplish exactly the opposite — mass starvation — because when prices are mandated at one penny for all grocery items, no one can supply the groceries without going bankrupt. So the entire supply chain shuts down, get it?

Similarly, if governments could mandate that no one live in poverty and no one suffer from malnourishment or starvation, why haven’t they already made that happen? The answer is because only free markets create prosperity, not governments. Governments systematically destroy prosperity, obliterate personal liberty and cause enormous human suffering. They do all this, of course, in the name of the “greater good.”

Is a gallon of gas worth $10 in a crisis? It very well may be, especially if it can get you and your family 20 miles down the road and away from the flooding. That gallon of gas, by the way, may have actually cost somebody almost $10 to get to you, given the high risks of moving vehicles full of fuel through flooded roadways and dangerous storms. To charge $10 for a gallon of gas in a disaster zone doesn’t seem unreasonable to me at all. If my vehicle had run out of fuel, I would much rather pay as much as $50 per gallon to have the gas, rather than remain stranded and stuck because the government forced gas prices below the level where anyone could break even by delivering that gas to the people in need.

So when you hear “price gouging,” don’t abandon reason and fall for the socialist / communist logic of price controls. Price controls often get people killed. Price controls create dire shortages and collapse supply lines. Price controls are the refuge of the intellectually lazy who don’t even attempt to understand how free market economics saves lives by delivering the goods people need, even through treacherous storms and natural disasters.

Thought experiment: Why shouldn’t government force SLASHING of all prices by 50% during any crisis?

Think about this for a minute: If government keeping prices artificially low during a crisis is somehow “good” for everyone, then why shouldn’t government mandate that all prices be slashed by 50% in order to “aid the flood victims?”

According to the logic of those who promote price controls, lower prices are always better. So why not order all retailers to drop prices by 80%? Or 90%? Or even 99%? Why should victims have to pay anything at all in their time of need, right?

The logic, of course, falls apart at the slightest questioning. Lower prices does not deliver more goods into the hands of those in need. It does precisely the opposite: It promotes shortages and supply chain breakdowns that deprive people of the items they need.

Government, of course, wants to be seen as the “provider” and “hero” to those in need. So government disrupts the supply lines of the private sector through price controls, forcing everybody into desperation caused by shortages, then the government shows up with trucks full of bottled water and food to “save” everybody. In truth, more people would have been saved by allowing the forces of supply and demand to function on their own. That’s not to say that government can’t offer additional supply to augment the free market, but government has no business interfering with market forces that actually worsen the shortages that it claims to be solving. It’s almost a false flag operation, where government causes the very problem it claims to solve.

Just listen to Vice President Mike Pence and his interview on Rush Limbaugh yesterday. Pence couldn’t wait to announce seemingly unlimited check-writing from the government to everyone impacted by the hurricane. Now, even Republicans are 100% on board with the idea that government is your savior, and the free market is your enemy. If you want to be “saved,” Pence promised, you have to wait for the government to write you a check. This is the new Republican party, by the way, which has become the party of big government just like the Democrats.

No wonder America is in so much trouble these days. There’s no longer any political party that supports free market economics. As a result, we all suffer.

Texans take care of each other, and as a confirmation of that, the Health Ranger Store is announcing a 48-hour fundraising effort to directly aid victims of Hurricane Harvey. All sales from 8/30 (Wednesday) through 8/31 (Thursday) result in a 50% donation to local relief groups that are aiding Hurricane Harvey victims. Fifty cents on every dollar of sales, in other words, is donated to these groups.

Donation dollar amounts and destinations will all be posted on NaturalNews.com. This is how you can help hurricane victims while helping yourself get prepared. Check out the 600+ products at HealthRangerStore.com and stock up on everything you need. You’ll be helping yourself while helping Hurricane Harvey victims at the same time.

The fundraising event begins at midnight tonight and runs for 48 hours. Again, 50% of all sales revenues are donated to Hurricane Harvey victims. (This means we’re giving up all our profit and digging into our own pockets as well, in order to make these donations.) Stock up on everything you need during this 48-hour fundraiser at HealthRangerStore.com.

We’re going to donate that money directly to the groups on the front lines, and they will use the money to buy food, water, hotel rooms and so on. As per my argument above, this is increasing the supply of money that’s chasing the same quantity of limited goods in the marketplace. This is precisely why prices should naturally rise for such goods, because now there is a greater supply of money chasing the supply of goods in the local area. If prices were allowed to rise, more goods would be made available (because the supply side would be incentivized) and more people would be helped. After all, more money is now available to help them, thanks to donations like ours.

Then again, trying to explain economics to people in a nation where half the country has been brainwashed into thinking that communism is a good idea is sort of like trying to teach a pigeon how to play chess. It wastes your time and annoys the pigeon. Yes, you can fight hurricanes, but you can’t fight stupidity. So we do the best we can and wonder why humans remain so incredibly ignorant when the solutions to their worst problems are staring them in the face.