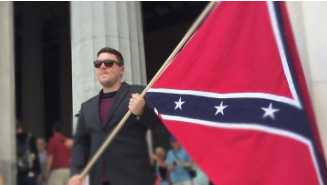 First and foremost, it’s important to set the record straight once and for all – the violence and chaos that occurred in Charlottesville, Virginia earlier this month was not the result of conservative activists; as a matter of fact, conservatives had absolutely nothing to do with it. The hatred, bigotry and violence came primarily from radical leftists and white nationalists claiming to be on the right side of the political spectrum, neither of which represents the principles or values held so dearly by patriotic conservative Americans.

As a matter of fact, new evidence suggests that it was actually the radical leftists that were largely responsible for the deadly “Unite the Right” movement that was on display in Charlottesville. According to the Southern Poverty Law Center, the organizer of Unite the Right was a man by the name of Jason Kessler, an Obama supporter that was heavily involved in the Occupy movement as recently as last November.

“Rumors abound on white nationalist forums that Kessler’s ideological pedigree before 2016 was less than pure and seem to point to involvement in the Occupy movement and past support for President Obama,” the Southern Poverty Law Center states. The SPLC goes on to explain how at a recent speech in which Kessler vocalized his support for Charlottesville’s status as a sanctuary city, “Kessler live-streamed himself as an attendee questioned him and apologized for an undisclosed spat during Kessler’s apparent involvement with Occupy. Kessler appeared visibly perturbed by the woman’s presence and reminders of their past association.”

In January of this year, Kessler established the white supremacist group “Unity and Security for America,” which frankly raises more questions than answers. If Kessler was a fan of Barack Obama, the first African-American to ever be elected into the White House in U.S. history, why on earth would he suddenly become a white nationalist? It would be a bit more understandable if Obama had been out of office for several years, during which time Kessler could really have developed a strong hatred of minorities. But Obama – who again, Kessler was a fan of – has not even been out of office for a year. How could someone go from supporting the first black president to starting a white supremacist organization in such a short amount of time? It just doesn’t add up. (Related: Charlottesville reporting shows the real danger to America is not violent riots but a dishonest media.)

Another bizarre discovery regarding the “Unite the Right” protests in Charlottesville was recently pointed out by the website IBankCoin.com. A picture of the event that was published on social media as well as IBankCoin.com depicts a man with glasses walking around with a Nazi flag resting across his shoulder. Yet in another picture, this same man appears to be standing in a crowd at a leftist parade. Of course, its entirely possible that the man with the Nazi flag and the man at the leftist parade could just look similar and not actually be the same person, but it is still a significant observation. 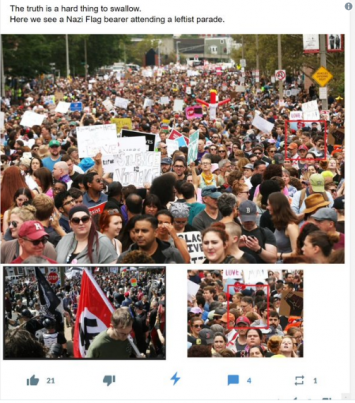 While the idea that much of the violence that occurred in Charlottesville and elsewhere could have been staged sounds like nothing but a conspiracy theory, it is actually entirely possible – as a matter of fact, it has happened on several different occasions.

In January of 2015, for instance, the Washington Times ran a story with the headline, “George Soros Funds Ferguson Protests, Hopes To Spur Civil Action.” The article explained how “Mr. Soros gave at least $33 million in one year to support already-established groups that embolden the grass-roots, on-the-ground activists in Ferguson, according to the most recent tax filings of his nonprofit Open Society Foundation.”

As cynical as it is, there really are people out there like George Soros who actively try to spark violence and chaos, and then reap the benefits afterwards. Could the violence in Charlottesville and the driving force behind the radical “Unite the Right” movement been controlled by a mastermind working behind the scenes as well?