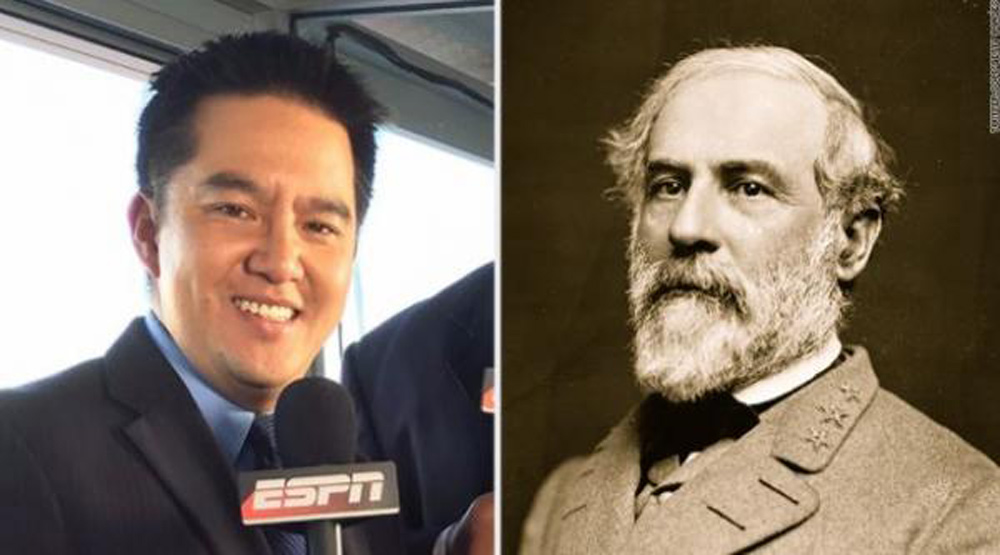 In case you haven’t kept up with the increasing insanity of the intolerant Left in America, ESPN has pulled an Asian-American announcer named “Robert Lee” from a college football game because his name might have “triggered” fragile snowflakes who have been transformed into shivering blobs of lunacy by the Left’s relentless attack on logic and reason.

“In a story that seems made for The Onion, but is actually true, according to multiple Outkick fans inside ESPN MSESPN decided to pull an Asian college football announcer named Robert Lee off the William and Mary at University of Virginia college football game because they were concerned that having an ASIAN FOOTBALL ANNOUNCER NAMED ROBERT LEE would be offensive to some viewers,” reports OutkickTheCoverage.com.

Robert E. Lee, of course, is the Virginian Civil War general whose statues have been the subject of a whole different chapter of left-wing insanity across America as the intolerant Left attempts to memory-hole history by defacing nearly every statue and monument across the country (including status of Abraham Lincon, stupidly). Now, the Left’s attempts to memory-hole everything in sight in a bizarre effort to “protect” hysterical people from being “triggered” has resulted in an Asian-American named Robert Lee being punished for sharing the last name of Robert E. Lee.

So now, according to the Left, you can be discriminated against, vilified and have your career wrecked merely by being given the wrong name by your parents at birth.

Here’s a photo of Robert Lee the Asian-American alongside Robert E. Lee the Civil War general, in case you happened to be too stupid to tell the difference: Having Asian skin tone, notably, doesn’t protect you from this discrimination and lunacy. Even Asians are now subject to the outrageous idiocy of the deranged Left, in much the same way that now white gay men are being ostracized by the Left for being white. Apparently, their “gayness” is not strong enough to overcome their “whiteness,” according to the deranged Left, which now literally judges people by the color of their skin. It seems that the whiteness-to-gayness ratio is simply too high among certain people for the lunatic Left to tolerate these days.

It also turns out that, according to the deranged Left, all people are created equal unless your last name is “Lee” or you have white skin, or you’re a male, a Christian, a heterosexual or a Trump supporter. In those cases, you are vilified, ostracized, punched in the face and beset upon by an actual lynch mob of deranged, left-wing lunatics. (Read more examples at LiberalMob.com)

Of course, if this Asian-American named Robert Lee had changed his name to, let’s say, Muhammad Hussein Obama, his entire career track would have been rapidly elevated with raises, bonuses and quota fulfillment activities galore.

Due to a growing backlash, ESPN has now issued a statement but not an apology. Via Outkick The Coverage, which originally broke this story:

We collectively made the decision with Robert to switch games as the tragic events in Charlottesville were unfolding, simply because of the coincidence of his name. In that moment it felt right to all parties. It’s a shame that this is even a topic of conversation and we regret that who calls play by play for a football game has become an issue.

So ESPN “regrets” that who calls the plays of a football game “has become an issue?” Note the passive voice. It was ESPN, of course, that made it an issue by discriminating against Robert Lee because of his name!

In case you didn’t already know, Lee is an incredibly common last name among people of Asian heritage. There are probably over 100 million people in the world named “Lee,” and now, according to the Left, we should discriminate against them all by firing them from their jobs, vilifying them and wrecking their careers.

This is the new “justice” of the deranged, lunatic Left that demands absolute power over your country, your thoughts, your speech and your values. If you do not conform to their lunacy, you will be systematically censored or penalized by Google, Facebook, YouTube, Twitter, PayPal, GoDaddy and other techno tyrants. You are required to conform to whatever idiocy the liberal mob is pushing today, whether it be defacing historical monuments, raging against people named “Lee” or demanding that all white people give their homes to black people (yes, that’s the new demand from Black Lives Matter).

Well, that was a bit embarrassing. Antifascist liberals mounted thousand-strong counter-rallies all weekend against a Nazi threat that proved nonexistent or thin on the ground. Leftists imagined themselves to be modern-day versions of the Czech resistance or the Warsaw uprising, but it turns out they were the majoritarian mob shouting down a handful of losers who’ve been an execrable but small part of the American pageant for as long as most of us can remember.

To state another obvious point, our civil liberties are meaningless if they don’t protect unpopular views. It’s not the mob but the mob’s targets that need protection.

More relevant is the principle that large mobs are more dangerous than small mobs, and likely to harbor more psychopaths. Apparently running out of Nazis to resist, Boston protesters threw rocks and urine-filled bottles at police. Any shortage of white supremacists can always be corrected by expanding the definition. Opponents of a $15 minimum wage are racist. Skeptics about a pending climate crisis are racist. Anyone questioning the utility of pulling down old statues is racist.

The slippery slope of civil-rights erosion is manifest every time certain members of the vituperative left open their mouths.

Where does the insanity end? It never ends if you keep trying to appease the insane Left

If you’re wondering where all this ends, in truth it never ends if you keep trying to appease the deranged, lunatic Left. The political Left in America is populated by a lynch mob of insane, unhinged lunatics who don’t even realize it was Democrats who ran the KKK and pushed for segregation in America. Hillary Clinton’s mentor Robert Byrd was a high-ranking member of the Ku Klux Klan, and the democrat-run KKK used gun control to prevent black people from being able to defend themselves against the KKK lynchings, led by powerful, racist Democrats.

Yet the average Leftist in America today wouldn’t know that because they have zero knowledge of actual history. Nearly all Leftists rioting on the streets are functionally illiterate, victims of the failed Left-controlled education system that produces only obedience, servitude and victimhood, not education and empowerment. The left-wing media, education system and hate factory known as Hollywood have all produced an entire generation of clueless, mindless, enraged zombies who bounce from one outrage to the next, never understanding what, exactly, they’re fighting against. Allow me to answer that question. You are fighting against logic and reason. You are enemies of civilization and civility. You are Mao’s Cultural Revolutionary mass murderers reborn, and you are the single greatest threat to the future of freedom and democracy our world has ever known.

This is why the deranged Left must be opposed, resisted and dismantled at every opportunity. Don’t give these lunatics an inch, for if you do, they will take everything from you: Your culture, your history, your homes, your jobs, your children and even your future.

Read The Big Lie: Exposing the Nazi Roots of the American Left. Learn the truth about history. Sweep the cobwebs out of your head and start taking action to resist the insanity of the deranged, lunatic Left. If you don’t, they will sooner or later find a reason to come for you, too…

…Even if you’re Asian-American and have the last name “Lee.”