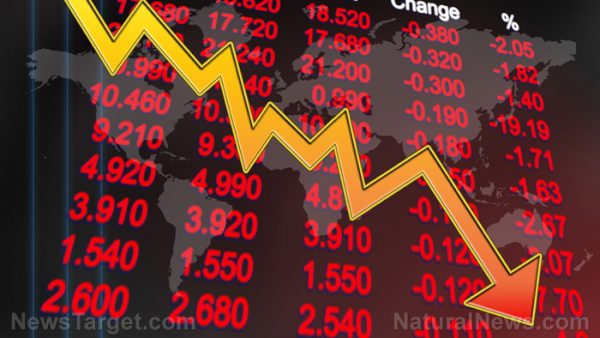 Despite reaching record highs in recent weeks, the stock market isn’t necessarily as healthy or as stable as many investors and financial gurus would like to believe it is. According to money manager and analyst Michael Pento, the markets may actually be on the brink of disaster, as the fundamentals increasingly suggest that the world of finance is entering highly precarious and even “dangerous” territory.

Pento has been carefully observing the actions of the private Federal Reserve with regard to interest rates, bonds and mortgage-backed securities, and he’s convinced that this apparent market boon is something of a smokescreen. The Fed’s endless printing of fiat dollars (Federal Reserve Notes) has created what appears to be growth in the financial markets, but this doesn’t reflect the actual state of the American economy, which in many ways is functioning on life support.

Commenting on the housing market, for instance, Pento notes that it has continued to dwindle month after month for some time now. Existing home sales have barely increased as the Fed progressively increases interest rates. To make matters worse, the private central bank will eventually begin to sell off all of the treasuries and mortgage-backed securities to clear up its balance sheet, which will exacerbate the problem.

““I know for sure when central banks remove their thumb from the scale on the prices of bonds, they will crater and yields will soar …,” Pento says. “We have 1.9% annualized growth.  So, we are falling below 2% (growth) in this country. … The supply of debt has already grown 31% year over year. … Can you imagine adding trillions of dollars of bonds that have to be purchased?”

“Who is going to buy them at these levels? No one. So, bond yields are going to rise, prices are going to fall, and that is going to send the already rolling over housing market, auto market, student loan market and credit card market into a plummeting toboggan slide.”

Just like previous crashes, the next market crash to occur will be caused by the Fed, Pento warns. And he believes it will arrive before the end of 2017, as not only bonds are in trouble but also the derivative market. There are multiple hundreds of trillions of dollars in credit default swaps that are staked on interest rates never going up. But interest rates are going up, which spells impending doom.

The Fed has already raised interest rates four times, and it will soon initiate reverse quantitative easing (QE), likely in October. Once this happens, the derivative market will be hit hard, as will the credit markets. If Pento’s estimate is correct, the entire credit pipeline could cease, which is what he says he’s “most afraid of in the fall.”

“Cash levels are at an all-time low on institutional balance sheets for the stock market, and margin debt is at an all-time high,” Pento warns. “If that doesn’t scare you coming into the fall, I think you really need a wakeup call.”

The stock market was already greatly overvalued even back in 2016, so it is only more so now. The whole thing represents a giant house of cards that’s about to collapse, which in Pento’s view means that precious metals like gold will likely see a major boost in the coming months.

Once the market comes to the realization that the central banking Ponzi scheme has completely lost control of the economy and the money supply – which Pento believes will happen by no later than the middle of 2018 – that’s when gold will take the lead, in his opinion.

“That is the big moment when you want to pile into gold,” he says. “If you don’t have any gold, you should have at least 10% always.”