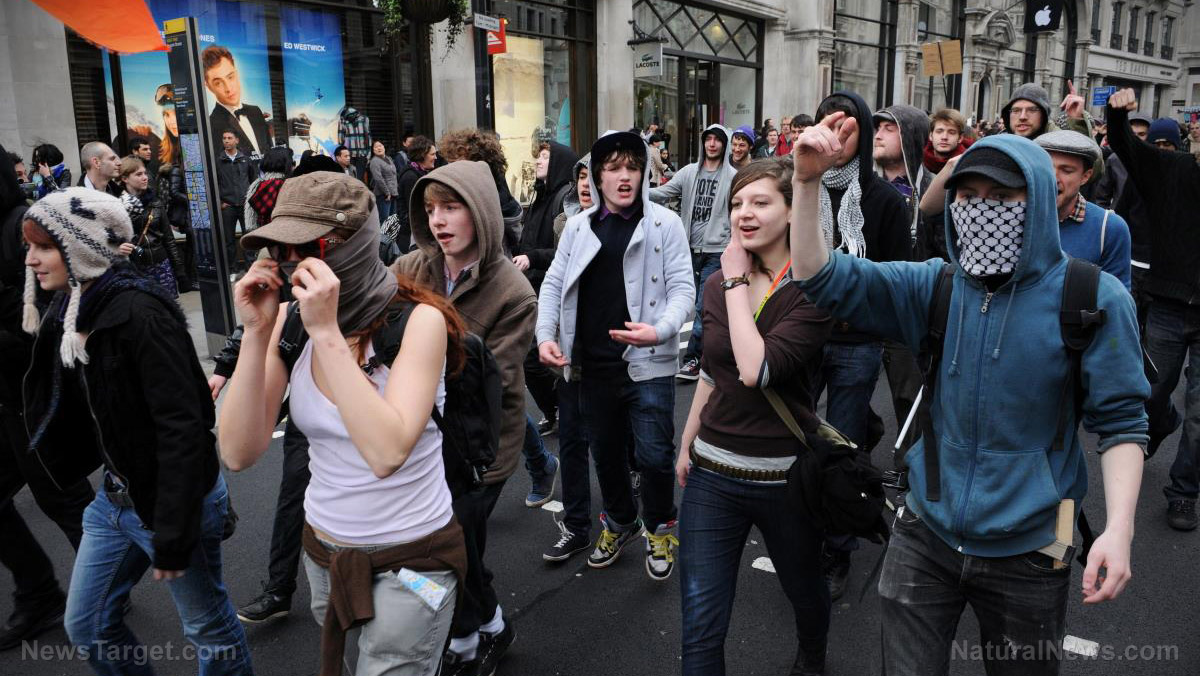 Let’s get something straight. The far Left in America, which has long dominated American pop culture, academia, entertainment and even the political direction of our country, has a singular goal in mind for the future.

That goal is the taking of power, period, and the new wave of Leftists demonstrate daily they are willing to tear the founding constitutional fabric of the country apart to ensure there is no opposition to their rule.

A microcosm of this much larger movement just occurred at a small college in Costa Mesa, Calif., where students there actually stormed the administration building to demand that any groups on campus like the College Republicans be forced to disband and shut their mouths because they refuse to toe the far-Left “progressive” line.

As reported by Campus Reform, the demand centers around the release of emails obtained via a public records request by the OCC chapter of College Republicans that showed that Prof. Jessica Alabi told OCC President Dr. Dennis Harkins she would “stand up” to the club if he refused to do so.

In addition, documents obtained by the College Republicans would not let members of the organization attend an event she held on campus because she claimed they were a threat to students’ “safe spaces.” (RELATED: America’s Colleges Have Become INSANE ASYLUMS Run By Deranged, Mentally Ill Students Trained In The Art Of CRYBULLY Tactics)

You can’t make this garbage up.

The CRs have demanded an investigation into Alabi’s behavior, which fits a wider pattern of faculty hostility toward the club ever since it made national news by releasing a recording of one professor’s classroom rant calling Donald Trump’s election an “act of terrorism.”

The ensuing firestorm of negative publicity divided the campus, with faculty members issuing a statement calling the audio’s release a “politically motivated act” and then subsequently honoring the professor, Olga Stable-Cox, as “Faculty Member of the Year,” in an apparent snub of the CR chapter.

Besides merely mocking the OCC College Republicans, the school also took vengeance on the student who recorded Stable-Cox’s comments, Caleb O’Neil. He was temporarily suspended under a very obscure, rarely enforced rule that prohibits students from recording professors without first getting permission.

College Republican Joshua Recalde-Martinez told Campus Reform that he didn’t get why other students were so upset; he said all the organization did was expose how hostile some faculty members are towards campus conservatives.

“It makes no sense to me why the union and a vocal minority of students would protest against the OCC Republicans simply for asking for an investigation into the matter and protections for students from being discriminated against on the basis of their political affiliation,” he said.

It makes perfect sense when you understand that the hard Left’s ultimate goal is extinguishing any and all forms of opposition to progressive ideals. The real goof here is that conservative-hating professors like those at OCC, who are rife on college and university campuses all over the country, like to push the First Amendment’s freedom of speech protections for anyone who agrees with them, but deny it to those who don’t.

If they can’t intimidate opponents into silence, they will seek to ban their voices. That’s what this “protest” at OCC is about; ending the administration’s “neutrality” over speech and ordering the College Republicans to disband.

Because banning speech you don’t agree with is much easier than debating those who have differences of opinion. That way you don’t have to defend your own ideas, you can just demand compliance.

The Left isn’t about freedom and liberty. It’s about authoritarianism, power and tyranny, as this latest incident on yet another college campus proves. And let this sink in: These are our country’s future leaders.

As should be obvious, these students are getting their lessons in Left-wing tyranny from their professors. They are creating the progressive legions who will be unleashed on society with one goal in mind: Disassemble all political opposition.

Get ready for chaos.