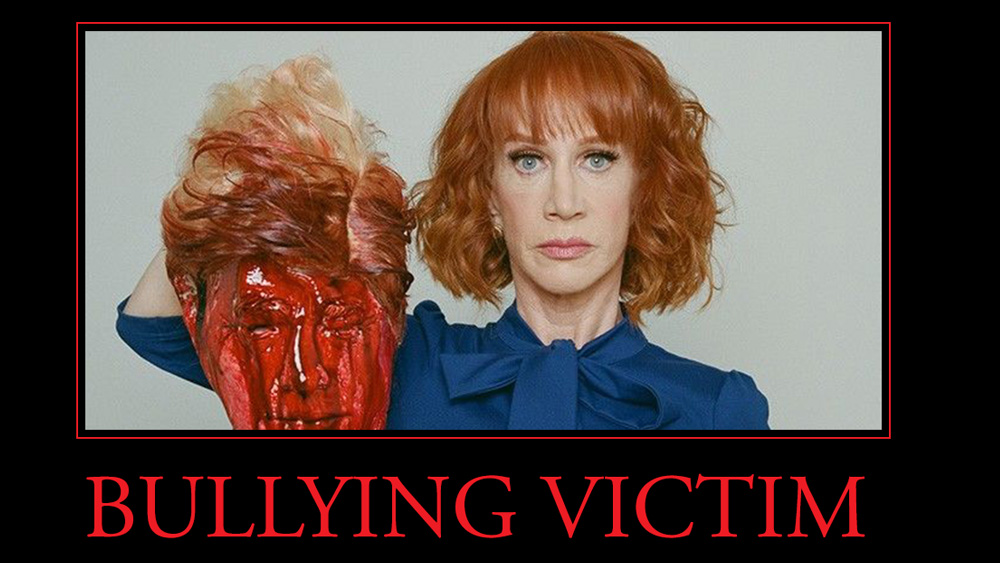 When she decided to slither out of the woodwork recently to join the ranks of many of her classless colleagues in viciously attacking the president, comedian Kathy Griffin delivered a very clear message to the world: Respecting the office of the presidency is only necessary when the person she voted for wins. And rather than honor election outcomes that she doesn’t like, she instead chose to join the likes of ISIS in promoting the beheading of her political opponents for a cheap laugh.

Just in case you missed it, Griffin recently posed with a decapitated, blood-covered prosthetic head that resembled Donald Trump in a photo that was published by TMZ. It’s was a truly grotesque act that Griffin apparently thought would bring her endless accolades, considering that many of the other Hollywood elitists whom she surrounds herself with seem to hold similar views. But as is typical for this washed-up entertainer, her over-the-top schtick didn’t go over so well with the average American. As a result, Griffin is now rightfully reaping what she so callously sowed, as her career is now rapidly drying up and her reputation in absolute free-fall.

Nobody wants anything to do with Griffin anymore – not that very many people did prior to this tasteless gaffe, to be quite honest – so she’s now vying for damage control. At first, Griffin tried to double-down in defense of her vile actions. When that didn’t work, she proceeded to take aim at President Trump by attempting to somehow blame him for what she did, accusing him of trying to ruin her career. That didn’t work either, so now other past-their-prime entertainers like Jerry Seinfeld are publicly pretending that what Griffin did is no big deal.

Kathy Griffin can try all she wants to turn back time and pretend as though she did nothing wrong by posing with a bloodied prosthetic head that resembles our 45th president. But the entire world watched what she did, and most sane people agree that it was completely inappropriate. The public also isn’t expressing any opposition to the consequences that Griffin is now suffering, which include being fired from hosting CNN’s New Year’s Eve Live show, as well as losing every single scheduled venue on her upcoming comedy tour.

The irony, of course, is that Griffin went on a tirade several years back during a segment on The View when Elizabeth Hasselbeck began pointing out Barack Obama’s duplicitous stance on gay marriage. Griffin pulled out all of the most heinous trucker language she could get away with on network television, demanding that Hasselbeck “take it down a notch, ***ch.”

A video clip of this incident depicting Griffin in all of her foulness is available at Mediaite.com.

Griffin is now under investigation by the Secret Service over “the circumstances surrounding the photo shoot,” according to law enforcement sources. The agency posted in a “tweet” that threats made against protectees like President Trump “receive the highest priority of all of our investigations.” The agency also issued an official statement that reads:

“The U.S. Secret Service has a critical mission. It is always unfortunate when people make statements that could be perceived as threats. We don’t have the luxury of knowing a person’s intent. Each alleged or perceived threat has to be investigated thoroughly which taxes Secret Service manpower and resources that could be utilized elsewhere.”