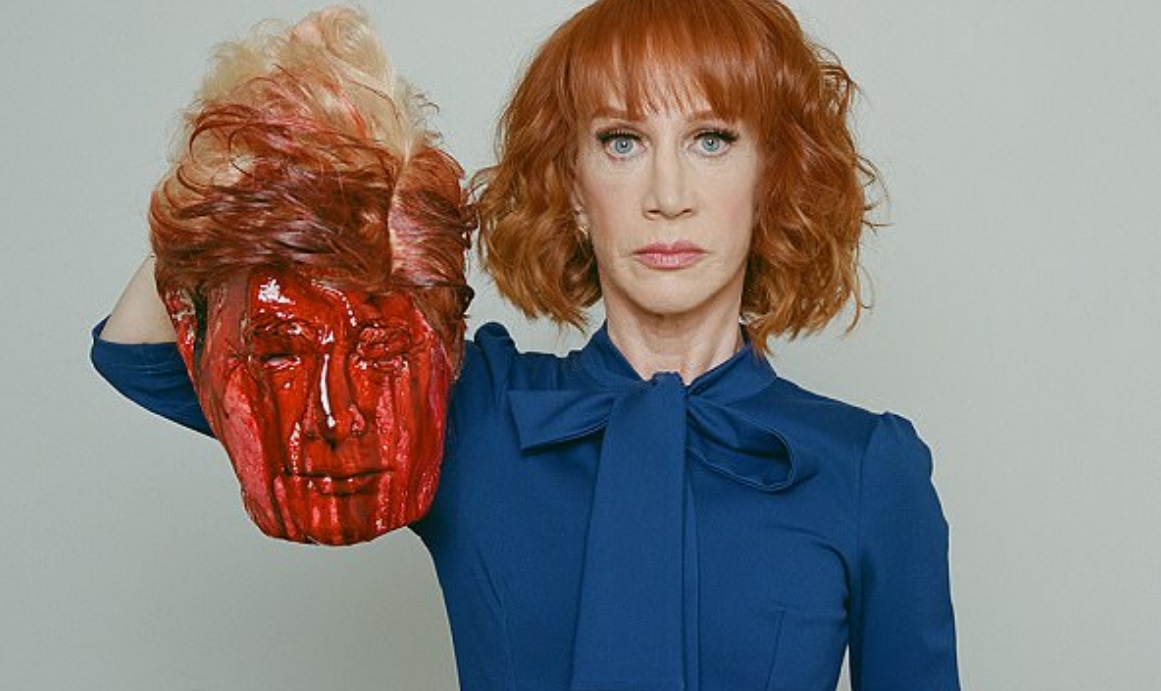 It’s hard to believe that it’s already been seven months since Donald Trump’s upset victory over Hillary Clinton in the presidential election. Over the course of those seven months, the liberals have demonstrated that they are incapable of handling the loss in a mature, rational manner. Instead, most of them are either still stuck in a state of denial, or are lashing out like a bunch of two-year-olds who were denied the box of cookies at the grocery store.

In the most recent childish attack on Donald Trump, comedian Kathy Griffin released a photo of herself holding a bloodied mask of the president, making it look as though he had been decapitated. According to TMZ, Griffin posed with the head on Tuesday “during a photo session with famed photog Tyler Shields, who’s known for edgy, shocking pics.”

TMZ added that “During the photo shoot, Kathy joked that she and Tyler would need to move to Mexico once the pics got released, for fear they’d be thrown in prison.” It may be too late for Griffin now, but as a general rule of thumb, if you go into something thinking that it could possibly end with you getting thrown in prison, it might be a good idea to avoid doing it in the first place. (RELATED: Kathy Griffin sums up the deranged, violent, lunatic Left with video of the bloody, decapitated head of President Trump.)

In response to the gruesome photo, people on both sides of the political spectrum showed their disgust and disapproval. Anderson Cooper, host of Anderson Cooper 360 on CNN and good friend of Griffin, wrote, “For the record, I am appalled by the photo shoot Kathy Griffin took part in. It is clearly disgusting and completely inappropriate.” Conservatives across the country have also expressed outrage, arguing that the photo wasn’t funny in the least bit and severely crossed the line.

One of the few leftists who has come out in support of Kathy Griffin is none other than Jim Carey, who argued in an interview with People Magazine that “comics are the last line of defense” against Trump, and that Griffin should double down by “holding up a severed leg as well.”

The picture of the bloodied Trump mask is just the latest installment in a series of bizarre and psychopathic attacks on the president of the United States. Indeed, one of Donald Trump’s harshest critics has been liberal filmmaker Michael Moore. Just a few days ago, Moore accused Trump of being the inspiration for the stabbing of two men in Portland, Oregon by a white supremacist, a charge that is both absurd and unproven.

In yet another strange and baseless attack, Moore took to Twitter on March 28 of this year to accuse President Trump of putting policies in place that will bring about the end of the world. “Historians in the near future will mark today, March 28, 2017, as the day the extinction of human life began, thanks 2 Donald Trump.”

Even before Trump was officially elected president of the United States, Moore did an interview with Rolling Stone and accused those who supported the billionaire Republican candidate of being legal terrorists. “I want them to think about the damage they could do by being a legal terrorist on November 8,” Moore said. It’s interesting how Michael Moore is brave enough to accuse those who support Donald Trump of being terrorists, while at the same time ignoring the fact that our former president, Barack Obama, was friends with actual terrorists like Bill Ayers.

Of course, Michael Moore isn’t the only one who has been smearing President Trump since Inauguration Day. Indeed, since January 20, nearly every anchor and commentator on cable news has been relentlessly trying to drag Trump through the dirt and ultimately get him out of the Oval Office. Why? Because despite their claims that they are tolerant and accepting of everyone, most liberals are actually incredibly intolerant, unforgiving, and full of hate.