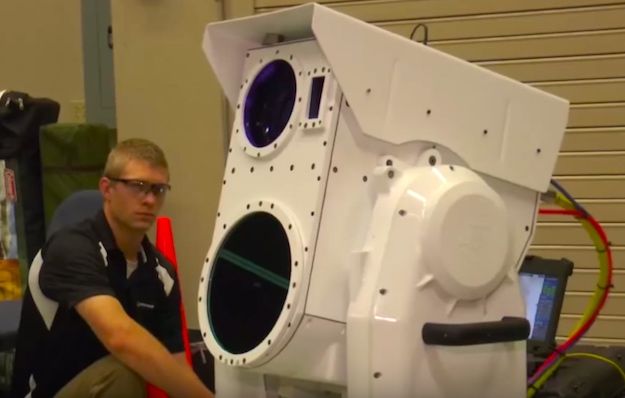 In yet another provocation, North Korea test-fired a ballistic missile on Monday — the third one this month and ninth this year — which landed dangerously close to Japan, ahead of a key U.S. anti-missile defense test that many hope will be the first successful trial in more than a year.

But as the North continues to develop longer-range intercontinental ballistic missiles and the nuclear warheads it hopes to place atop such missiles some day soon, the Pentagon is speeding development of a futuristic next-generation anti-missile weapon that could soon be ready for the battlefield: Lasers.

Past efforts by the Pentagon to develop airborne lasers mounted inside specially-built 747 aircraft, which were to be used against incoming ICBMs in their terminal phases failed, with the Defense Department abandoning the project some years ago. A follow-up effort is now underway to revitalize it, given the advances in laser technology.

But before that becomes a reality, the Pentagon sees a much more workable option: Mounting lasers on smaller vehicles and even warships that can knock out drones, missiles, radars and other weapons systems. (RELATED: North Korea just made a huge breakthrough in its nuclear program… here’s why you should be worried)

As reported by Stars & Stripes, the U.S. Army recently conducted field testing of Stryker-mounted lasers during an exercise at Fort Sill, Oklahoma, in April, which were used to destroy toy-like drones. Soldiers used a Mobile Expeditionary High Energy Laser to shoot down an 18-by-10-inch drone at about 650 yards, according to a statement from the Army.

“It’s nothing too complicated but you have to learn how to operate each system and get used to the controls which is exactly like a video game controller,” said Spc. Brandon Sallaway, a forward observer with the 4th Infantry Division, who tested the system and who had not fired a laser prior to the field exercise.

The drone-killing laser was relatively low energy — only 5 kilowatts — but the Army has tested much more powerful weapons. A 30-kilowatt truck-mounted High Energy Laser Mobile Demonstrator shot down dozens of mortar rounds and several drones in November 2013 at White Sands Missile Range, N.M.

Since those successes — and earlier ones dating back to 2009 — researchers have made substantial advances in laser weaponry and technology, according to Bob Roszkowski, a developer who works on air dominance projects and unmanned systems at Lockheed’s reclusive Skunk Works facility.

“We’re really on the cusp of seeing the introduction of lasers in future systems,” he said.

The U.S. Navy is also getting in on the laser weapon revolution. As NationalSecurity.news reported in August 2016, Navy laser weapon developers have mounted a prototype 30 kw laser system aboard the USS Ponce, which has begun testing the system.

However, experts say that much more power — in the hundreds of kilowatts — will be needed before laser systems can down missiles, though that remains a distinct goal of developers.

“That’s why we’re pursuing the technology in terms of trying to mature, not just the technology, but drive the size and weight down and we can start to think operationally about what that means,” Vice Adm. James Syring, director of the Missile Defense Agency, told Defense One last year.

“It’s not a hope. This is what we’re doing. I view this [as] highly important for the future,” he added.

The Army plans to double power output to 60 kilowatts over the next 18 months.

Lasers generate their beams via fiber optic cables like those used by telecoms, explained Robert Afzal, a senior fellow for laser systems at Lockheed. “We demonstrated that we could combine [a] large number of theses fiber lasers and link them to a weapons system,” he said.

Building a system that can down ICBMs in flight is years away, say experts. But the development trend of miniaturizing systems while bolstering power and reducing power consumption is key.

Stay up to date on our military at NationalSecurity.news.