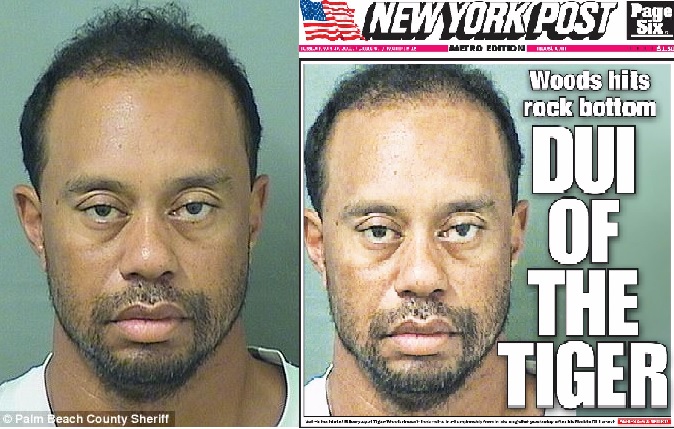 Either Tiger Woods is a drunken liar, or prescription medications are extremely dangerous to public safety.

Woods, who was arrested and charged with a DUI early Monday morning in Jupiter, Florida, says his erratic driving was caused by an “unexpected reaction” to prescription medications. In essence, Woods says he was “driving while medicated.”

“I want the public to know that alcohol was not involved,” Woods said in a public statement. “What happened was an unexpected reaction to prescribed medications. I didn’t realize the mix of medications had affected me so strongly.”

This apparent lie goes down in history alongside other epic lies from famous men caught with the wrong woman or the wrong chemicals in their bloodstream. Bill Clinton’s “I never had sexual relations with that women, Miss Lewinsky” comes to mind, along with, “I smoked marijuana but never inhaled.”

Are prescription medications just as dangerous as drunk driving? Or is Tiger Woods shoveling a cover story?

A witness, who wasn’t identified in the report, told the trooper he had been drinking alcohol earlier. The same witness also said Woods had been prescribed two drugs, the sleep aid Ambien and the painkiller Vicodin.

Tiger Woods currently earns over $45 million a year from lucrative sponsorship contracts, reports the UK Daily Mail. “The fallen golfing star currently earns $45.5M-a-year alone in sponsorship money – including more than $20m from his mega-bucks Nike contract – but following his latest public humiliation many expect the 41-year-old to be dropped.”

Driving under the influence of dangerous medications, in other words, just might cost Tiger Woods tens of millions of dollars a year in sponsorship money. He might, however, be able to sponsor some Chinese food restaurants that are offering a Drunken Noodles lunch special.

In conclusion, I might say that Tiger Woods has disappointed us all, but that wouldn’t be honest, either, because I never expected him to do anything other than self-destruct in a web of lies just like Lance Armstrong. Find more stories on celebrity self-destruction at CelebrityReputation.com.