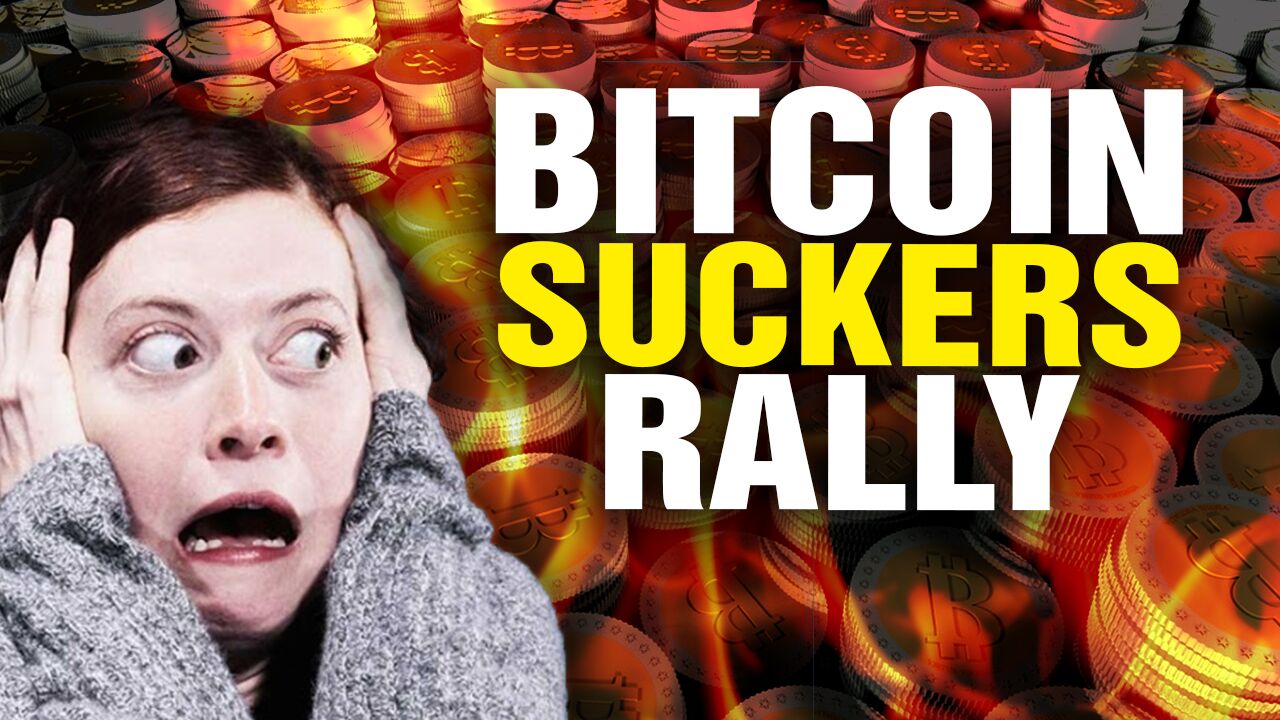 After yesterday’s massive Bitcoin correction, which saw the crypto currency plunge nearly $500 — over 10% — in a matter of hours, the Bitcoin propagandists took to their microphones to denounce anyone who rationally warns people about the volatility risk and increasingly “Ponzi” structure of Bitcoin.

What do all the people still pumping Bitcoin have in common? They all own lots of Bitcoin, and they need more suckers to join the scheme so they can unload their Bitcoin onto them at higher and higher valuations.

Bitcoin, in essence, has now become a “pump and dump” scheme. Amazingly, these are the very same people who say the stock market is going to crash because P/E ratios are out of whack and stock valuations are based on high expectations rather than earnings fundamentals. Yet Bitcoin pays no dividends at all and doesn’t have a P/E ratio since it’s not the stock of a company that produces anything that’s real. When corporate stocks skyrocket in value over time, it’s usually because those corporations experience increasing profits and pay out increasing dividends to shareholders. Yet Bitcoin has no “profits” other than speculative profits. It doesn’t produce anything other than more Bitcoins. It pays no dividends, and it isn’t even an entity that owns any real assets such as factories, land or raw materials. Bitcoin isn’t even an entity. It’s more like a mathematical hologram.

In fact, Bitcoin isn’t subject to SEC regulations like regular stocks are, which is why Bitcoin is rife with “insider trading” and unscrupulous future valuations claims that would get people arrested if this took place in publicly-traded corporations.

It’s sad. We are watching Bitcoin devolve into a giant CON, and it’s the self-serving Bitcoin owners who are screaming the loudest for everyone to keep buying in. This is exactly the kind of thing that’s going to end up getting Bitcoin criminalized and banned by the governments of the world after tens of millions of people experience catastrophic losses.

I’ve always been pro-Bitcoin in terms of the concept, the decentralization, the portability and the innovation, but now it’s easy to see that the very people pumping up Bitcoin are the ones who will destroy its credibility. Why? Because now millions of average people are buying in, totally clueless to what Bitcoin really is. When the great Bitcoin crash arrives — and it will — the losses among everyday people will be truly epic, and the dishonest mainstream media will follow it up with stories about how “Bitcoin ruined the lives” of grandmothers and retirees.

The headlines are totally predictable: “Bitcoin wipeout proves crypto currency too dangerous for the public” or “Bitcoin plunge leads to suicides in Tokyo” etc. After the wipeout, lawmakers will ban Bitcoin, citing all the people who were “hurt” by the crash, and they’ll point their fingers squarely at those who pumped up Bitcoin with the maximum hype. In fact, I wouldn’t be surprised to see governments attempt to arrest some of those people for engaging in financial fraud. (Which seems stupid, since the far greater fraud is central banks, but I’m just explaining the narrative that governments will invoke as they try to destroy Bitcoin forever.)

Like I’ve said all along, Bitcoin is far better off when a slow, steady growth in value as more people use it transactionally, yet what we’re seeing now is a speculative greed-driven buy-in, all pumped up by some really unscrupulous hawkers who are so wound up into the Bitcoin narrative that in any other industry they’d be called con artists. In the stock market, it’s called a “pump and dump” operation, where promoters talk up a stock to a new wave of sucker investors, then they dump it for profits.

Sadly, that’s what Bitcoin has now become. It’s regrettable, because all the hype and lying is only going to discredit Bitcoin in the long run. All the hype videos, articles and outlandish claims of future valuations will of course be gathered as evidence to be used to discredit Bitcoin and its loudest advocates once the Bitcoin craze crashes and burns.

For the record, after Bitcoin crashes and burns off the current bubble, I will still gladly use Bitcoin as a transactional currency because I like its many benefits for transactional anonymity, efficiency and universality. I’ve never been “anti-Bitcoin.” What I’m opposed to is the irrational hype and the exploitation of innocent people who are going to get burned very badly at some point because they don’t understand how crypto currencies really work. The average person literally thinks Bitcoin can be bought and sold like a stock share, and they assume it’s regulated somehow, too, so they believe there’s some sort of “safety net” oversight at work. In reality, there’s no safety net at all. There’s no oversight. There’s no central authority that can control Bitcoin because the whole point of Bitcoin is to not be run by some central authority (which is a good thing in the right context).

Based on all these false assumptions, some people are quite literally mortgaging their homes to buy Bitcoin because they’ve bought into the hype that claims “Bitcoin is going to $100,000” (or similar claims). This is precisely the WRONG kind of Bitcoin buyer we should want: Speculators who are technically illiterate and driven by greed alone. These are the very people who will panic and sell when the market turns against them, and they will drive Bitcoin toward new lows once the blind faith in their minds is shattered.

Notice in all this, by the way, that I am trying to protect the long-term integrity of Bitcoin even though I own almost no Bitcoins (currently just 0.25 Bitcoins). In contrast, the people pushing Bitcoin the loudest are just trying to protect their own holdings. Their concern is based on greed. My concern is based on defending the reputation of all crypto currency. Yet they will claim I’m trying to “hurt” Bitcoin because I’m not all-in for the pump & dump.

I’m not trying to hurt Bitcoin, you idiots. I’m trying to SAVE IT from being discredited after the hype bubble that YOU created crashes and burns.