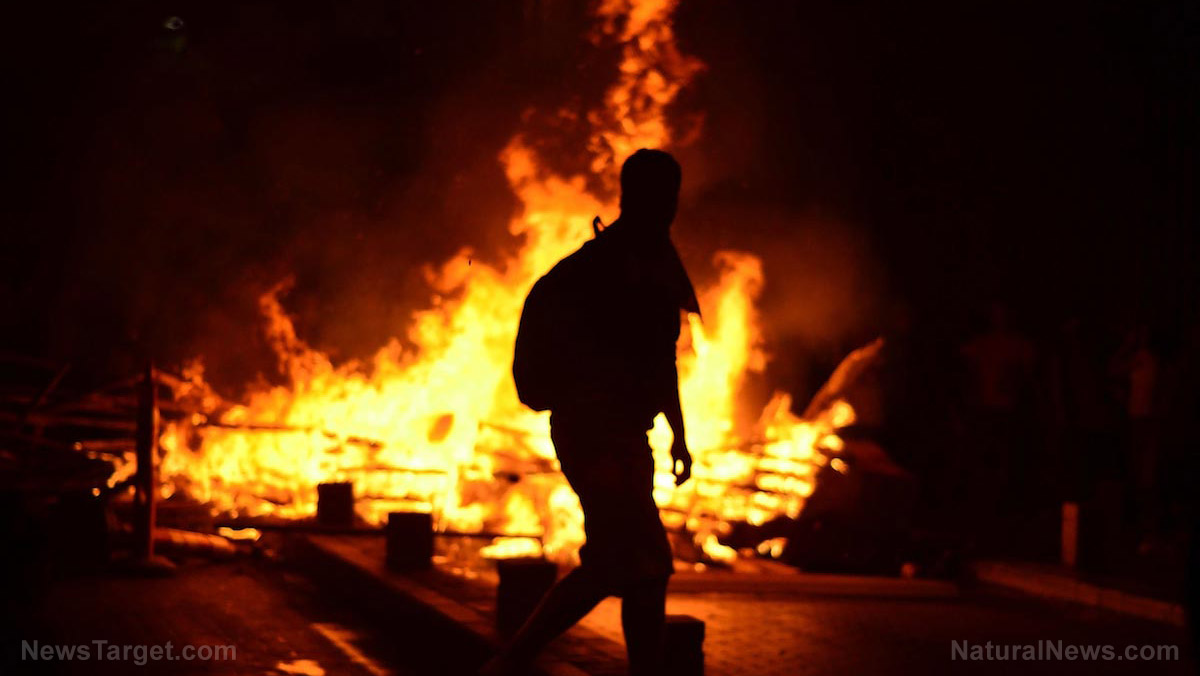 Over the last decade or so, we’ve all watch in horror as America’s universities have been turned into what can now clearly be called extremism training camps for left-wing fascists. Instead of teaching students to be responsible adults with critical thinking skills, colleges and universities now focus on obedience training coupled with deeply-ingrained hatred, intolerance and violence toward those who have opposing points of view.

Just yesterday, a professor of philosophy at Diablo Valley College, near UC Berkeley, was arrested for allegedly attacking Trump supporters with a bike lock, crushing the skull of one man and causing him to bleed profusely (see video below). This is the new “tolerance” of the college campus Left, where professors don black masks and attempt to murder political opponents by wielding kinetic weapons like something right out of the Bronze Age.

Fascinatingly, it turns out that the identity of the attacker never would have been revealed without the efforts of 4chan, which has quite literally become more effective than your local police department in conducting detailed investigations. (Seriously, 4chan is a force to be reckoned with, and they nailed it on this issue. Rock on, 4chan!)

As part of the terrorism training on college campuses, Hunter College is now offering a new course called “Abolition of Whiteness” which is based on an ethnic cleansing curriculum to political science majors.

The point of the course, obviously, is to indoctrinate students into embracing genocide against Whites. It is taught, as you might guess, by a “Women and Gender Studies” female crybully professor named Jennifer Gaboury. The course “is cross-listed for both her department and the Political Science Department, where it fulfills one of four required courses in the “4 subfields of political science” under the umbrella of POLSC 204: Contemporary Issues in Political Theory,” reports Campus Reform.

Yep, genocide against Whites is now welcomed as part of the curricula at universities in America. Many of these courses are even taught by White professors who are so full of self-hatred and disgust for their very own skin that they probably can’t wait to commit suicide in the name of “social justice.”

Not to be outdone by the fascist, genocidal violence and training at other universities, the University of Maryland has announced a secret police snitch program where students and staffers will spy on other students and staffer in order to root out (and report to “campus authorities”) any whiff of so-called “bias.”

Marching in lockstep with the Third Reich, University of Maryland President Wallace Loh declared the new student secret police snitch initiative to be an “anti-hate task force.” (Will participants be issued brown shirts, too?)

According to Wtop.com, the new “anti-hate” action plan will, “create a rapid-response team” and generate an “annual report on all campus hate-bias incidents” which will obviously include the cafeteria’s “Mexican Day” burrito fest, because now even the attempt to introduce ethnic food into a college cafeteria is considered a hate crime by the mentally ill Left.

The fascist student spy network will, of course, vastly increase paranoia and distrust across the entire student body, whose members will find themselves living in a perfect training camp of totalitarian “authority,” helping them adjust to the fascist Left-wing police state society they will face after graduation.

Moving along in our tour of liberal college insanity, the University of Illinois has banned James Watson, who won the Nobel Prize for his discovery of DNA (shared with Francis Crick), from speaking at their university.

The science of genetics, you see, now stands in total contradiction to the left-wing delusion of transgenderism. Genetics science education is now being labeled “intolerant” because it teaches the principle that gender is determined by XX or XY chromosomes rather than a fleeting, momentary feeling combined with a magical wish.

Watson is accused of analyzing genetics and daring to say that certain populations of people in Africa evolved differently from other populations, which the entire liberal establish of intolerant crybullies instantly transformed into a charge of “RACISM.” Now, the crybully students and staffers at the University of Illinois have banned Watson from speaking on genetics and cancer, even though Watson is arguably the most qualified person on the planet to teach students about genetics. From The College Fix:

Kate Clancy, professor of biological anthropology, started tweet-threatening to disrupt Watson’s speech if the university let him visit, much like faculty at Middlebury College whipped their students into a frenzy when the social scientist Murray spoke there.

And it worked “within an hour,” according to the News-Gazette.

Institute Director Gene Robinson justified the snub to the News-Gazette based on “faculty concerns.” His earlier email to faculty “stated very clearly that we didn’t condone any of his past comments” and that Watson had apologized, but he caved anyway.

Finally, from the libtard Leftist expanse of Washington state comes a fascinating story from Evergreen State College, where a mob of indoctrinated left-wing fascist students demanded the resignation of a white professor over his refusal to evacuate the campus for “No Whites Day.” (Yes, this is now a thing on the racist, hate-filled college campuses across America. No Whites Day.)

A video of the confrontation at Evergreen State College, recorded by one of the protesters and posted to Facebook on Tuesday, shows biology professor Bret Weinstein attempting to reason with dozens of students who routinely shout him down, curse at him and demand his resignation.

Listen to the college professor attempt to reason with his deranged students who are obviously so deluded and filled with intolerance and hatred that they no longer recognize REASON at all and can only shout “White privilege” like mindless morons:

Yes, friends, this is what a college education has come to in America: Indoctrination training for the wave of mindless left-wing zombies who somehow plan to overthrow the country, take back the White House, eliminate all White people with ethnic cleansing, and then finally embrace their utopian society of secret police and totalitarian authority where everyone is disarmed except for the government thugs who enforce “tolerance” at gunpoint. (Astonishingly, Leftists don’t even see any irony in that description…)

The solution to all this? I say this in jest, but wouldn’t it be fun to send in the National Guard, arrest all the violent activist students and sentence them to a “summer camp” of civility training where they are taught how to constructively participate in a civilized society? Watching some of these campus videos, I still can’t believe these professors stand there and actually argue with these idiotic youth when, in truth, they all just need a good “reset” with the help of an experienced Drill Sergeant who refuses to take their bulls##t flack.

Seriously: Put these kids in a summer camp where they actually have to wash dishes, mow the lawn, do the laundry or engage in physical activities to accomplish something (which the rest of us learned growing up, long before the Millennial generation came along and announced they were all too “special” to exert any effort on anything). A couple of weeks of drywall work will do wonders for the maturity of your average college snowflake crybully.

From there, the courses can advance to subjects like, “How to Not Behave Like a F-ing Idiot 101,” or “Economics For Leftists: Redistribution of Wealth is Not Equality.” In fact, I’d be happy to volunteer to teach a course entitled, “Conformity is not Diversity,” followed by, “Hatred is not Tolerance.”

It’s no joke, of course, that we need to seriously reform colleges and universities across this nation. The commie professors all need to be fired en masse. The weak-willed administrators need to be replaced with mature adults who can stand their ground against young crybullies and whiny snowflakes whose only skill in life seems to be crying and bullying everybody around them until they get what they want. For students who engage in violent activism, campus property defacement or organizing violent protests to block the free speech of others, they should be permanently expelled and shamed on social media.

It’s time to take back our universities from the insane, fascist Left and restore our universities to institutions of learning for a sane, rational society inhabited by educated adults. Remember: Liberalism is fascism. And fascists have no tolerance for anyone who isn’t as equally insane as they are. If you’re not willing to play along with their insanity, their long-term plan is to literally exterminate you in the name of “tolerance” to eliminate your “bias.”

literal insane asylums whose only mission seems to be producing a generation of delusional, mentally ill youth to fulfill the “totalitarian utopia” dreams of the unhinged Left.