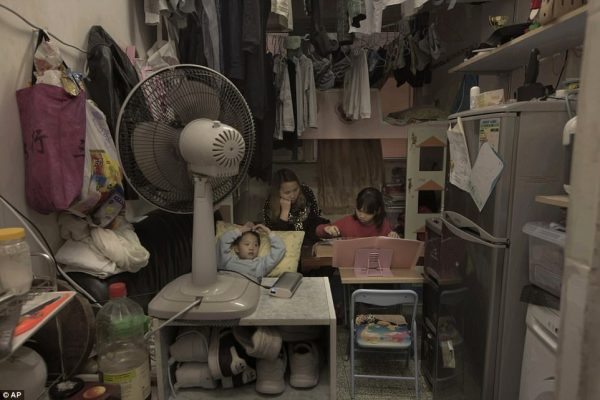 There’s a show my family particularly likes watching called Tiny House, Big Living, which depicts savvy young people making the choice to scale down and simplify their homes in order to keep their living costs down. Their houses may be small – generally under 400 square feet – but they are usually beautiful, warm and cozy. While the idea of going that small might be too much (or too little) for many people to contemplate, the tiny homes depicted in the show are positively palatial compared to the minuscule “sub-divided” homes lived in by over 200,000 of Hong Kong’s residents.

The tiny rooftop shacks, metal cages and 10- to 15-foot wooden bunk homes stacked one on top of the other are referred to as “coffin homes” by their inhabitants because of their size and appearance. Describing life in such a home, one resident said, “I’m not even dead yet but I’m already living in my coffin — four walls and nails.”

Hong Kong’s booming real estate market and skyrocketing rentals have forced hundreds of thousands of the 1.2 million people living in poverty to live in these cramped, unsafe and unsanitary cubicles. Houses in the high end of the Hong Kong property market sell for as much as a staggering $10,550 per square foot. To put that into perspective, according to Business Insider, property in Manhattan, New York, sells for around $1,538 per square foot, and is considered outrageously expensive. A buyer could pick up a property in Detroit for just $12 per square foot. [RELATED: Is China’s massive property boom coming to an end?]

One single mom, Li Suet-wen, pays $580 (U.S.) a month for the tiny 120-square foot home she shares with her two children. She has been forced to cram a bunk bed, small couch, washing machine, fridge and small table into the precious available space. And this family is considerably better off than those that have to live in the even smaller coffin homes.

In some instances, over two dozen people live in tiny bunk bed homes in which they cannot even stretch out their legs, and must share a combined kitchen and a single toilet. They have absolutely no privacy.

The coffin homes, stacked one on top of the other, with illegal wiring strung openly across the walls, are a health and safety nightmare. And as one resident, who gave his name simply as Mak, said, “There have been close calls over the years. We’re stacked like sardines, and there are no regulations. We’d all be dead if a fire were to start.”

An email to CNN by Home Affairs Spokesperson Elain Chu seems to indicate that the government is well aware of the problem but is choosing to do nothing about it; for the most part, they appear to be washing their hands of the whole situation.

Chu noted that although there is an ordinance requiring that any apartment with 12 or more bed spaces obtain a special license, “the Ordinance was not formulated to prohibit or illegalize bedspace apartments,” and was simply put in place to try to ensure that such apartments meet fire and safety codes – which most clearly do not. The government is making no effort to offer the city’s poorest residents any other options.

As Mak said, “It’s not that the H.K. government can’t help people like me who are part of the low-income society and need help. It’s that they don’t want to help people like us and solve problems like this.”

The United Nations has condemned the appalling conditions in these truly tiny homes, calling them “an insult to human dignity.”