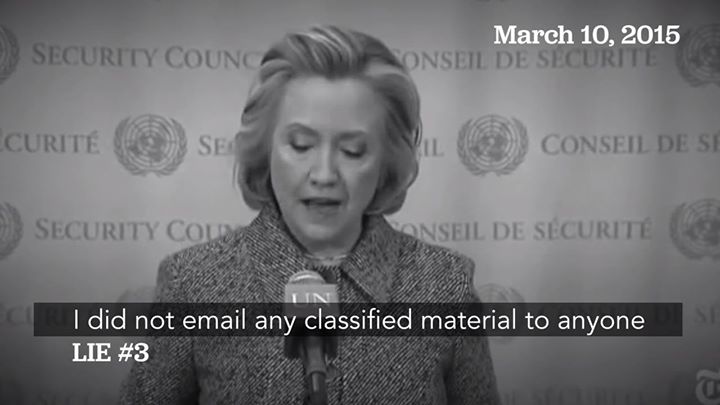 It seems that Democrats who once despised former FBI Director James Comey, for potentially costing Hillary Clinton the election, are now singing his praises after President Donald J. Trump fired him last week. They are continuing to push their false narrative that Trump fired Comey to quash the FBI’s investigation into “Trump-Russia collusion.” However, some now believe the dismissal opens the path to new criminal inquiries into Hillary Clinton, top aide Huma Abedin and her estranged husband, Anthony “Carlos Danger” Weiner.

As reported by Disobedient Media, sources believe the FBI may now begin releasing (leaking?) documents on the Clinton criminal investigation as the Department of Justice may seek a fresh examination of the evidence.

When Comey spoke to reporters last July in a highly unprecedented press conference, he laid out clear, concise and specific violations of law regarding Clinton’s criminal mishandling of classified information via her unsecured personal email server she kept hidden in her Chappaqua, New York, home. (RELATED: In case you were wondering why Trump didn’t tell staffers he was going to fire Comey…)

Real reporters who don’t have an agenda weren’t really surprised, given that we had been reporting for months on her “alleged” legal transgressions. But then Comey dropped the real bomb – he said “no reasonable prosecutor” would take the case, which was not his decision to make. Granted, it wasn’t likely that Barack Obama would have allowed his Justice Department to prosecute the presidential nominee everyone thought was a shoo-in to beat Trump, but again, the call was not Comey’s to make. He should have made his recommendation and let the chips fall where they may.

So the bottom line is, Clinton wasn’t charged when she should have been. However, under the statute of limitations laws, she still could be. According to FederalCharges.com, a website that explains them in detail, federal statutes generally provide a 5-year statute of limitations. However, in cases of Espionage Act violations, legal scholars “generally” agree that they “can be prosecuted for at least 10 years after the alleged act,” the site notes, adding: “Certain executive acts and extenuating factors (my emphasis) may provide prosecution after an even longer period of time.”

Were Clinton’s acts considered “executive acts?” Were there “extenuating factors” involved? You could make the case for both; as head of the State Department, that is a Cabinet – and thus Executive level – appointment. The “extenuating factor” here could be the fact that she took the unusual step of setting up her own private server in her home to conduct official business, out of the view of governmental record keepers.

Now, did she violate the Espionage Act, which would trigger a longer statute of limitations? Legal experts and former Justice Department prosecutors certainly believe so.

One of them is Andrew McCarthy, a former assistant U.S. attorney for the Southern District of New York who led the 1995 terrorism prosecution against Sheikh Omar Abdel Rahman and eleven others. Writing in National Review in July 2016 – immediately after Comey gave his bizarre press conference – he noted:

There is no way of getting around this: According to Director James Comey (disclosure: a former colleague and longtime friend of mine), Hillary Clinton checked every box required for a felony violation of Section 793(f) of the federal penal code (Title 18): With lawful access to highly classified information she acted with gross negligence in removing and causing it to be removed it from its proper place of custody, and she transmitted it and caused it to be transmitted to others not authorized to have it, in patent violation of her trust.

The Espionage Act statutes were originally contained in Title 50 USC, under war statutes, but are now contained in Title 18 USC. (RELATED: Democrats’ goal is to overthrow Trump presidency, even if they have to destroy America in the process)

So, about those FBI leaks? Are they forthcoming? WikiLeaks founder Julian Assange says so, as he tweeted on May 9. The only thing he asks is that full documents are leaked so that the corrupt Washington establishment media, which will protect the Deep State, can’t spin the story.

Disobedient Media also noted that an additional source claimed that interim FBI Director Andrew McCabe, a longtime Democratic operative, will not be in charge for long because the White House has no confidence in him, either. Depending on whom Trump appoints – and whom the Senate is willing to confirm – new probes of old crimes by a serial law bender could be in the offing.