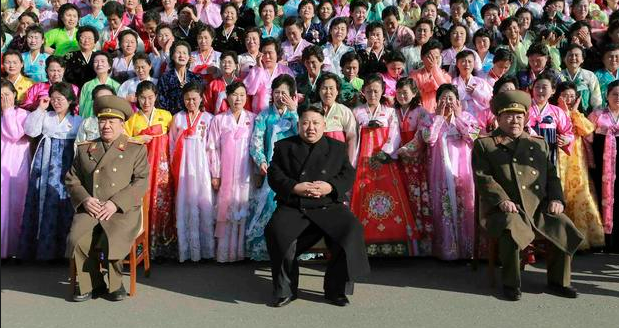 If President Donald J. Trump and his national security team decide that the nuclear threat posed by North Korea has risen to an unacceptable level – both to the U.S. and its regional allies – there are several military options on the table for him to choose from.

Only, none of them are good, according to a range of experts who have spoken recently about them.

Bloomberg News reports that the options include taking out North Korea’s nuclear production facilities at Yongbyon, where it enriches plutonium for the 10-25 nuclear weapons the country is estimated to have produced thus far, sending warplanes and cruise missiles against the regime’s conventional weapons massed along the border with South Korea, or even Stealth bomber strikes against naval yards and other targets.

But all of these would no doubt trigger a response from leader Kim Jong-un. And worse, no one is certain what that response would entail. (RELATED: How much Chinese help on North Korea can Trump expect? This expert says ‘not very much’)

If Kim is able to smuggle a nuclear device aboard a cargo ship – one flagged under another country – and sail it into a South Korea, Japanese or U.S. port, the damage and number of casualties would be great.

North Korea also has a substantial cyber warfare capability, which could be used to disable large portions of the U.S. power grid, banking system, and critical infrastructure.

Also, Pyongyang possesses one of the world’s largest stockpiles of chemical weapons and has an active biological weapons development program.

Plus, as The New York Times noted, the North’s missile development may be far more advanced than anyone knows. During last weekend’s massive military parade marking the 105th birthday of founder Kim il-Sung, Kim Jong-un’s grandfather, several new designs were put on display that Western military analysts and North Korea experts had never seen before – perhaps as a not-so-subtle way of demonstrating that Pyongyang has far more military strength than believed.

Citing analysts who have viewed footage of the parade, at least two new ICBM types were put on display, or at least, canisters allegedly holding two new missile types were displayed. Either way, the analysts said, the fact that North Korea put them on display indicates that Pyongyang is most definitely at least seeking the ability to strike the United States.

Additional missiles were displayed on tracked vehicles, indicating a capability to hide them using the country’s rugged roads (North Korea does not have many paved highways). These were of shorter length and obviously not capable of hitting the U.S. But they could house missiles that can hit South Korea and Japan.

There was also a new type of submarine-launched missile put on display, though it isn’t known whether it’s operational yet. Still, the country – which is known to have at least one missile-launching sub – does have the KN-11, which is operational and can be moved closer to shore by submarine, making it harder to track and defend against.

Taken in sum, North Korea’s military – and it’s ability to counterstrike – make first-strike options for the U.S. difficult, at best.

In 2013, when North Korea unveiled a map with a war plan for nuclear strikes against major American cities, “we all fell out of our chairs laughing,” said Melissa R. Hanham, an analyst at the Middlebury Institute of International Studies in Monterey, Calif. After a series of breakthroughs, including those shown on Saturday, they’re not laughing anymore, Ms. Hanham said: “The more they roll out, the more it looks like that is their actual plan.”

In an interview with Bloomberg, Bill McKinney, a retired U.S. Army colonel who spent four decades involved in U.S. planning for North Korea, said it’s difficult to get a clear picture about the country, making strike decisions difficult.

“Our ability to see into North Korea is so curtailed that we don’t have the ability to make well-reasoned judgments about what’s going on,” he said, adding that America’s ability to know what kind of weapons are in North Korea and where they are located so they can be hit has always been “a bit of a crapshoot.” (RELATED: Trump Considering “Kinetic Military Action” On North Korea Including “Sudden Strike”)

Other analysts were equally bearish on striking North Korea.

“Some might say, ‘Look, you know they can’t respond because they’re fearful of the consequences,”’ Bruce Klingner, a senior fellow at the Heritage Foundation, told Bloomberg. But, he added, the regime may well just say, “‘Well guys, game on.’ You can’t guarantee what North Korea will do.”

Retired Air Force Col. Sam Gardiner ran a war game exercise on U.S. military responses to North Korea for The Atlantic in 2005. The results? There were no good results.

“In essence, there is no military option,” Gardiner told Bloomberg. When pressed to pick one option he would recommend to President Trump if asked, he said, “I would resign first.”