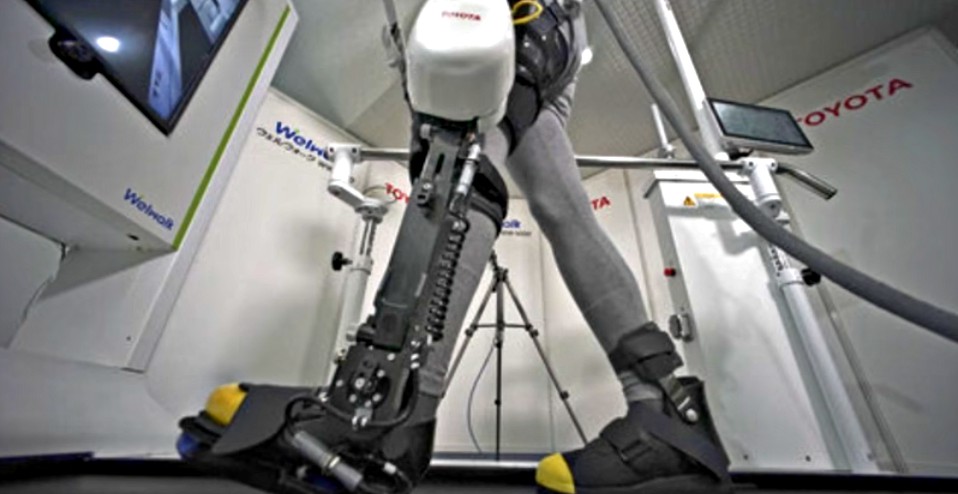 Toyota recently unveiled its Welwalk WW-1000 system designed to assist partially-paralyzed patients in walking. The robotic leg, developed in collaboration with the Fujita Health University Hospital in Japan, featured a motorized mechanical frame that fitted a patient’s leg from the knee down. The patients practiced walking using the robotic leg on a special treadmill that supported their weight. The robotic leg would prove beneficial especially among patients who were severely paralyzed on each side of the body as a result of stroke or other debilitating diseases.

The technology helped “reduce the burden on the patient and allows them to engage in training for longer,” said Toshiyuki Isobe, one of the automobile giant’s chief research officers, in an article published in BBC.com. According to Dr Eiichi Saito, Executive Vice President of Fujita Health University, the goal is to provide patients with just enough assistance that will gradually lessen until the patients can walk by themselves.

The latest development may help mitigate the burden of walking among the elderly.

According to the researchers, renting the equipment may prove more cost-effective than purchasing the system outright. Renting the system will cost $9,130, with a monthly rental cost of $3,195. Toyota did not disclose how much the system would cost if bought outright. (Related: Find out more about the latest developments in cyber science and robotics at Robotics.news)

Other robotic legs available in the market

Outside expert Dr. Farshid Amirabdollahian pointed out that robotic legs have been in the market for years, and that Toyota’s newest offering is not exactly a fresh concept. However, the expert was quick to laud the company’s proposed rental service, as it makes the system more accessible for hospitals. Dr. Farshid Amirabdollahian is a Rehabilitation Robotics and Assistive Technology Expert at the University of Hertfordshire in the U.K.

“A system called Lokomat, which works on both legs, has been adopted by the NHS. There are similar systems in use in the Netherlands and the United States. What is interesting here is the service model. Previously users of this technology were limited by how much they could afford: rehabilitation technology is quite expensive and many [hospitals] cannot afford it,” Dr. Amirabdollahian said in the same article in BBC.com.

True enough, quite a number of companies have also released robotic legs in the past years. Just last year, SuitX has introduced its Phoenix Robotic Exoskeleton designed to assist paralyzed patients in walking. The system weighs only 27 pounds and can be custom-fitted to the user’s body. The light-weight system features small motors attached to standard orthotics, which then transmit movement to the user’s hips and knees. This enables wearers to control the movement of each leg, and help them walk up to 1.1 miles.

In 2015, Iceland-based orthopedic company Ossur launched its Propio Foot prosthetic. The prosthetic device features a motorized, battery-powered ankle that is practically wearable. The device uses algorithms and sensors that automatically adjusts to the user’s foot angles at any point in walking.