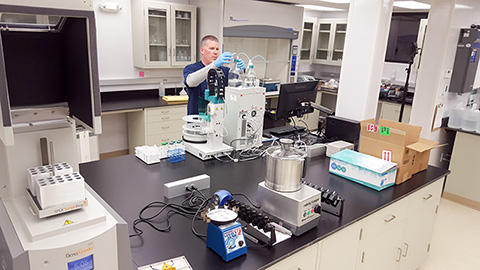 The looming threat of nuclear war and recent nuclear disasters like the Fukushima triple meltdown have brought concerns about radiation exposure front and center.

If a nuclear catastrophe strikes, the radioactive isotope cesium-137 could pose a huge problem for humankind. This deadly radioisotope was produced after the Chernobyl and Fukushima meltdowns, and it is also generated after the release of nuclear bombs. Once ingested, it essentially irradiates the body from the inside out. It is distributed through the body’s soft tissues, like the muscles, exposing them to gamma radiation and heightening your risk of cancer.

Mike Adams, the Health Ranger, has taken his longstanding quest to help people avoid toxins one step further by developing a breakthrough invention that could save millions of lives. The food science researcher has come up a formula that can remove 95 percent of cesium-137 from a person’s digestive tract after exposure, thereby preventing the absorption of this dangerous radioactive chemical. His innovative formula, which was developed and refined at CWC Labs, was awarded a patent from the U.S. patent office. It has been scientifically validated at two different labs using ICP-MS lab protocols.

It works by using dehydrated seaweed, seawater extract, chlorella, spirulina, and zeolites that Adams’ research has shown work extremely well at binding to cesium-137 and flushing it out of the digestive tract. All of these ingredients are used at certain particle sizes and ratios that make them effective, even at high cesium concentrations.

You might have already started stocking up on iodine products like nascent iodine and potassium iodine, and these are all great options for protecting your thyroid from certain radioactive isotopes, but it won’t help at all when it comes to cesium. This is not something that you want in your body. With a half-life of 30 years and the ability to contaminate soil for as long as 300 years, it’s easy to see why stopping it from getting into your system is so important.

While Adams is not selling Cesium Eliminator to the public to avoid misuse, he is stockpiling 10,000 kilograms of the material needed to create the product in a Texas warehouse, and he has announced that he will manufacture and distribute the product as a capsule or in powder form to emergency response authorities and governments in order to aid victims of nuclear incidents. He has also offered to provide the formula’s licensing and manufacturing rights for free to any government that wants to manufacture a stockpile of its own.

The formula’s zeolites are compositionally high in aluminum, so the product is not intended to be taken routinely or as a preventive measure. Instead, it should be thought of as something to use in emergencies to get rid of dangerous radioactive elements. Of course, avoiding the consumption of radioactive food is the best course of action, but Cesium Eliminator can help in situations where contaminated food or water must be consumed in order to survive.

With so much political uncertainty in the world and unstable leaders in places like North Korea with access to nuclear weapons, it has never been more important to start seriously planning for the very real possibility of radiation exposure.