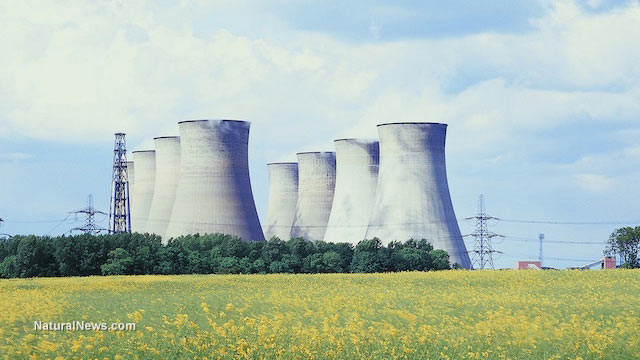 A new interactive chart created by the Union of Concerned Scientists (UCS) which serves as a database of U.S. nuclear reactors and safety issues associated with them, indicates there are nearly three dozen American plants holding an elevated number of spent fuel rods, a phenomenon which greatly compounded the radiation fallout when the Fukushima Daiichi plant was heavily damaged by a tsunami.

There are areas where there are concentrations of nuclear plants with elevated spent fuel rods sitting around in cooling pools. One area is the heavily populated region in and around Philadelphia, with another region near Chicago – the No. 3 and No. 5 largest cities, respectively, with a combined population of around 10 million people, when you consider the surrounding area.

According to the Nuclear Regulatory Commission, the federal agency in charge of overseeing the reliability and safety of the country’s 100-odd nuclear power plants, fuel rods are stored in at least 20 feet of water, which provides proper amounts of radiation shielding for anyone standing or working near them. (RELATED: Fukushima: Radiation Now Reported In West Coast Tuna)

The NRC says that “about one-fourth to one-third of the total fuel load from the pools is spent and removed from the reactor every 12 to 18 months” and then replaced with fresh fuel rods.

“Current regulations permit re-racking of the spent fuel pool grid and fuel assembly consolidation,” subject to the agency’s approval, “to increase the amount of spent fuel that can be stored in the pool,” the agency said on its website.

In other words, if the NRC approves, plants are permitted to increase the number of spent fuel rods in their cooling pools.

But is this safe? Understand that the Fukushima Daiichi nuclear power plant, which was heavily damaged by an earthquake-induced tsunami in March 2011, contained an elevated number of spent fuel rods. And the fallout from that error continues today.

On its website, the UCS notes that stored fuel rods can lead to a greater risk to the public if something out of the ordinary were to occur:

If a malfunction, a natural disaster, or a terrorist attack causes the water to leak from the pool or the cooling system to stop working, the rods will begin to heat the remaining water in the pool, eventually causing it to boil and evaporate. If the water that leaks or boils away cannot be replenished quickly enough, the water level will drop, exposing the fuel rods.

The group noted that if plants continue to add fuel rods to the pools, the problems are compounded because there is a dramatic increase in the number of radioactive materials that could be inadvertently released into the environment.

“A large radiation release from a spent fuel pool could release more cesium-137 than the Chernobyl disaster, resulting in thousands of cancer deaths and hundreds of billions of dollars in decontamination costs and economic damage,” the group said. (RELATED: On The Verge Of Nuclear War, Here Are SEVEN Critical Things You Need To Know About Iodine (And Three Dangerous Myths Debunked)

The UCS recommends that some spent fuel rods be moved to structures known as dry casks, which are typically made of steel and concrete, with the latter providing the shielding room radiation. These are generally stored on site at nuclear plants, and are located on concrete pads so as to prevent radiation seepage into the soil below. Fuel rods placed in these casks must first spend a full five years in a cooling pool; by then the rods are cool enough that “further cooling can be accomplished by natural convection – air flow driven by the decay heat of the spent fuel itself,” the group said.

For the record, according to the UCS’s interactive chart, seven reactors with elevated spent fuel pools are also located in areas at risk of earthquakes. And while the NRC says U.S. nuclear plants are built to withstand earthquakes, so were Japan’s reactors at the Fukushima plant.