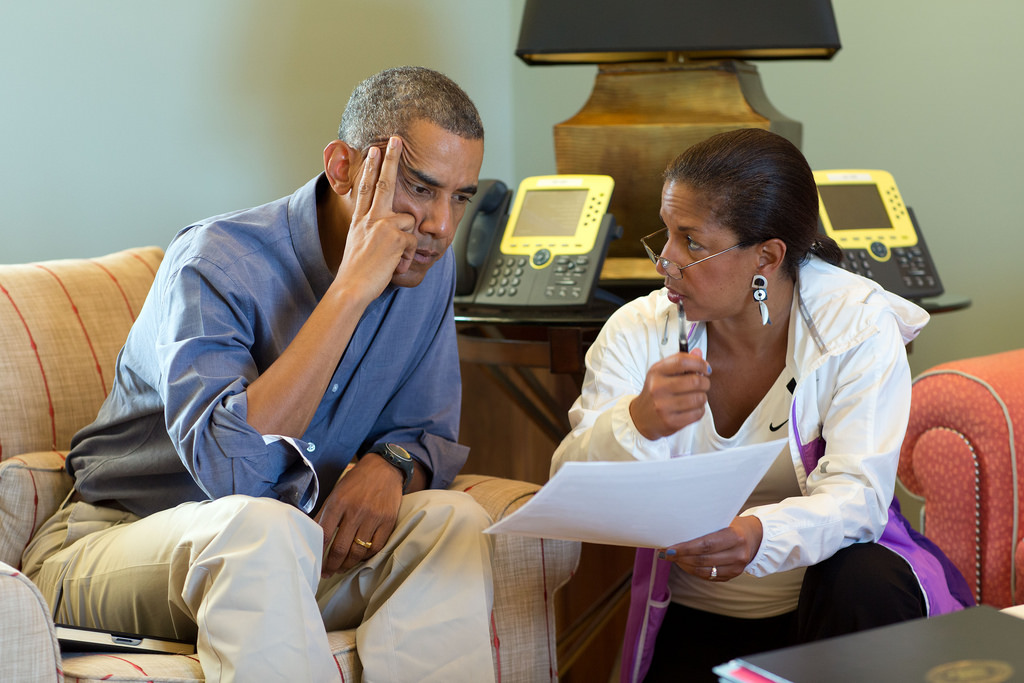 President Donald J. Trump tweeted on March 4 that President Obama ordered his “wires tapped,” an allegation that was roundly attacked by the discredited fake news media establishment as unhinged, blatantly false, and irresponsible.

But as we now know, Trump has been completely vindicated: The Obama administration most definitely ran a spy operation against the Trump campaign and transition teams, and it was spearheaded by former national security advisor and close Obama confidant Susan Rice, with some reported assistance from deputy national security advisor Ben Rhodes (whose brother, David Rhodes, is president of CBS News).

As reported by The Daily Caller, Rice ordered U.S. intelligence agencies to create “detailed spreadsheets” of legal, legitimate telephone conversations between Trump and his inner circle as he was running for president – meaning after he won the GOP nomination and before he beat Hillary Clinton on Nov 8, according to former U.S. Attorney Joseph diGenova. (RELATED: Was Obama’s national security advisor, Susan Rice, responsible for ‘unmasking’ Team Trump?)

In an interview with the news site, diGenova said what the intelligence community produced “at the request of Ms. Rice were detailed spreadsheets of intercepted phone calls with unmasked Trump associates in perfectly legal conversations with individuals.”

Continuing, he said that the intercepted communications “involved no illegal activity by anybody of the Trump associates, or anyone they were speaking with.” By comparison, he said, “the only apparent illegal activity was the unmasking of the people in the calls.”

Additional sources who requested anonymity confirmed to The Daily Caller diGenova’s account and description of events including the surveillance reports that Rice apparently ordered a full year before the November election.

These revelations come on the heels of a blockbuster report by investigative reporter Mike Cernovich – later supported by national security reporter Eli Lake at Bloomberg – that Rice was the official who requested that Team Trump members be “unmasked” – identified in intelligence reports, which is highly improper because they are American citizens not under investigation as suspected agents of a foreign government.

Susan Rice, who served as the National Security Adviser under President Obama, has been identified as the official who requested unmasking of incoming Trump officials, Cernovich Media can exclusively report.

The White House Counsel’s office identified Rice as the person responsible for the unmasking after examining Rice’s document log requests. The reports Rice requested to see are kept under tightly-controlled conditions. Each person must log her name before being granted access to them.

Such amazing reporting on unmasking and the crooked scheme against us by @foxandfriends. "Spied on before nomination." The real story.

As for the implications of Rice’s alleged actions, diGenova and other experts said there could be some criminality involved. They include Michael Doran, a former NSC senior director, who told The Daily Caller that “somebody blew a hole in the wall between national security secrets and partisan politics.” (RELATED: SHOCKER: Did Obama National Security Advisor Susan Rice “Unmask” Team Trump Members?)

What occurred “was a stream of evidence of information that was supposed to be hermetically sealed from politics and the Obama administration found a way to blow a hole in that wall.”

The improper unmasking of American citizens and then the leaking of those names is a felony, Doran said. “And you can get 10 years for that. It was a tremendous abuse of the system. We’re not supposed to be monitoring American citizens.”

He added that the bigger issue other than the crime is the loss of trust by the American public.

The Trump administration can go a long way towards regaining that trust by investigating the evidence and, if warranted, charging and prosecuting those responsible with high crimes.

Maybe now is a good time for Susan Rice and Ben Rhodes to hire attorneys, if they haven’t already. And why isn’t anyone in the establishment media asking Obama about any of this?