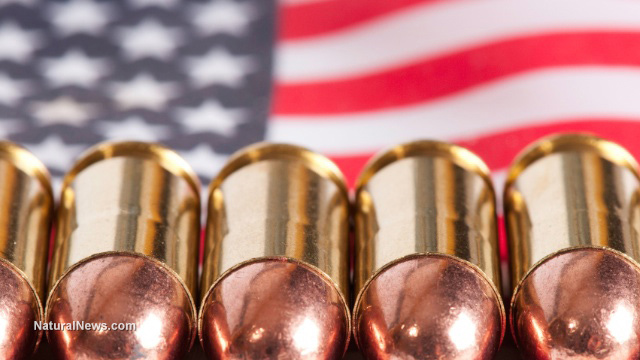 A well-organized prepper’s stockpile will usually include a reasonably large amount of ammunition to be used for self defense and/or hunting, and proper ammo storage is key to safety and long-term viability. Improperly stored ammunition rounds may not only become unreliable, but also dangerous to fire.

“Having a million rounds of ammo is great, but without proper storage those potential projectiles will be nothing more than a heap of brass–or worse, an accident waiting to happen.

“Over time, heat, moisture, and corrosion can wreak havoc on an ammunition supply. Cartridges can weaken and break, primers can lose their zing, and bullets can even corrode and lose mass, making them a safety hazard to fire.”

There are several things you can do to ensure that your ammo stockpile stays protected from the elements and remains usable for many years.

Making sure you purchase quality ammunition in the first place is one of the most important things you can do towards maintaining a viable stockpile. Never buy cheap ammo – this is not a commodity you can afford to cut corners on.

Make sure the ammunition you buy comes from a trusted source and that all the original packaging is intact. Check the date to make sure the rounds aren’t old – ammo more than a few years old may have been stored improperly so it’s best to buy the most recently manufactured product you can find.

Label and organize your ammo, making sure the dates are visible on the storage cases. Use the oldest rounds first.

“The best way to store ammunition is in plastic bags inside ammunition boxes that have a rubber seal (to keep moisture out), and placed in a cool, dark area. Rounds that have been exposed to heat may be defective, and this is what you’re looking to avoid most.”

Try to find a place for storage that will not subject the ammunition to extreme swings in temperature. It takes around 150 degrees F to cause direct damage to ammo powder, but rounds stored in an attic, for example, where the temperatures vary greatly between winter and summer, will deteriorate faster than those stored in a basement where temperatures are more constant year-round.

However, basements can also be high humidity environments, and that’s another big consideration.

Heat is not good for ammo, but the biggest concern for long-term storage is moisture. Storing ammo in a high humidity environment will lead to corrosion and damage to the powder inside the cartridges.

One way to fight humidity is through the use of desiccants. A desiccant is essentially anything that absorbs moisture, such as silica gel packets or Desi-Paks, which contain a clay desiccant. Some of the desiccant packets available will change color when they have absorbed all the humidity they are capable of – a useful feature for long-term ammo storage.

Desiccants are relatively inexpensive, but you can make an ultra-cheap desiccant at home simply by mixing a little salt with some uncooked rice and tying it into a piece of fine mesh cloth or tissue.

Storing your ammo in vacuum-sealed plastic bags is one of the best ways to beat humidity and is the perfect method for storing thousands of rounds in one bag.

Storing your ammo in clear plastic bags will also make it easier to perform periodic inspections to make sure the rounds are free of corrosion.

Proper ammo storage could prove to be essential to survival if a long-term crisis were to occur. There are many possible scenarios – man-made and natural – that could cause the foundations of our society to crumble virtually overnight.

A massive solar storm could destroy the power grid and shut down our computer-dependent financial system, but a human-directed cyberattack could accomplish virtually the same thing – and those are just two examples of the kind of catastrophe that could make preppers the only ones in a position to deal with it.

And that’s why taking good care of your ammo is so important.