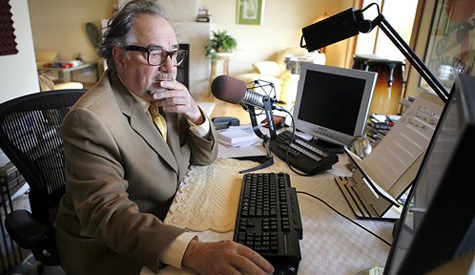 The opposition and outright hatred of President Donald J. Trump by many on the Alt-Left has led to one violent incident after another since his election, and the latest to occur actually involved a talk radio giant who has been an avid, vocal supporter of the billionaire real estate mogul – Dr. Michael Savage.

As initially reported by San Francisco-area media blogger Rich Lieberman, Savage was confronted, verbally abused, and then physically assaulted by an unknown assailant last week at a Marin County restaurant as he attempted to leave the business.

Savage, who was dining with his dog “Teddy,” finished his dinner at Servino Ristorante in Tiburon, Calif., which is north of San Fran (where Savage’s flagship radio station, KSFO, is located), when the assailant walked up to him and called him by his legal surname, Weiner, in a mocking fashion.

At that, the assailant kicked Savage’s poodle Teddy out of the way then grabbed the talk show icon and bestselling author, throwing him to the ground, as reported by an eyewitness who watched the assault along with several other patrons at the eatery.

While Savage was not seriously hurt and his dog is alright, he was shaken and bloodied by the incident.

“We’re going to seek felony charges against the man and we’re going to investigate this as a hate crime because of Michael’s political views,” Savage attorney Dan Horowitz told Lieberman after the attack. (RELATED: Alt-Left training the new Brown Shirts as they disguise Trump “protests” as “defending freedom.”)

A Good Samaritan who attempted to intervene on Savage’s behalf, reports noted, was also summarily clocked in the face.

In a statement to Lieberman, Savage said:

He said “Are you Michael Weeener”! I turned to him and said, ‘Go away, I don’t know who you are.’

I turned to leave and he pushed me and I fell down. He moved toward me to push me down and he shoved my 10 pound poodle out of the way to get to me. He has lied and said I pushed him. That is absurd. Both of my hands were holding onto things!

As noted by the American Thinker, the Alt-Left local media is reporting that “Savage claims” what happened, happened. The San Francisco Chronicle led with “Firebrand conservative radio host and adamant President Trump supporter,” as though those two qualities were qualifiers for violence against him.

Because, you know, hey – being pro-Trump in sunny, mild, tolerant California can get your clock cleaned – you ought to know better:

Michael Savage, the popular right-wing radio personality and fierce Donald Trump supporter, says he was assaulted by a man as he was leaving a Marin County restaurant Tuesday night.

And why mention his support of Trump in the first place? Are the reporters and editors of the paper tacitly admitting they don’t support the president? Are they trying to say it’s okay if a ‘Trump supporter’ gets attacked? Are they explaining away the assault because he’s right-wing and somehow deserved it? (RELATED: Why are violent threats against our president suddenly okay?)

“The alleged assailant, whose name has not been released, should expect the panoply of weapons offered by hate crime statutes to be employed against him,” wrote Thomas Lifson for American Thinker. “Any social media or other public postings expressing hate toward Savage, Trump, or conservatives in general can be used to establish hatred as a motivation for a physical assault.”

That may even include so-called “mainstream media” ‘reporting.’

But the larger picture here is that violence committed against anyone who supports Trump is not only being encouraged by the entertainment industry and others, it is being excused and celebrated. While far-Left journalists and reporters taint the coverage of said events, Democrats have been completely silent; not one has stepped up to condemn the attacks. Keep up with this story at Conservative.news.