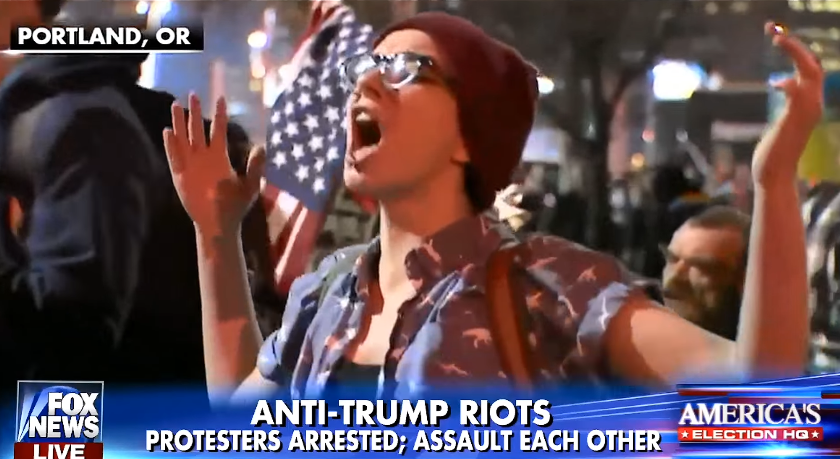 The American Civil Liberties Union is working overtime to convince a whole lot of Americans that somehow they lost most of their constitutional rights when Donald J. Trump won the presidency on November 8th.

As such, Alt-Left organizations and other similar groups are undertaking a massive recruitment program with the goal of training hundreds of thousands of people to become the 21st century version of the Nazi Brown Shirts.

The Associated Press reported over the weekend that the ACLU held nationwide “training” to ensure “people are aware of their rights as protesters and urge organized, public resistance by those opposed to policies of President Donald Trump.”

I’m not certain which rights people are currently unaware of in regards to voicing their opposition to Trump policies, given that protests have been occurring practically daily since Trump saddled Hillary Clinton with the mantle of “Worst Presidential Candidate Ever” along with her second Oval Office defeat. (RELATED: Why President Trump should issue an Interpol arrest warrant for George Soros.)

But apparently, according to the ACLU, a whole bunch of constitutional rights suddenly vanished November 9th that most Americans were not aware of:

The event, staged in town hall style, was aimed at capitalizing on numerous demonstrations since Trump’s election in November and to make sure people know their rights to protest, Romero said. He said priority issues are immigration, the First Amendment free speech and religious freedom rights, civil and reproductive rights and rights of gay, lesbian and transgender people.

Because you see, only Left-wing Democratic presidents get to advance their agendas, not Republican president with conservative leanings. No. Elections only matter when Democrats win; when a Republican wins, even with 74 more electoral votes, those results are illegitimate because they were stolen, hacked by a foreign government or otherwise ill-gotten.

In addition to creating new Brown Shirts to shout down, beat up, and intimidate Trump supporters in cities all over the country, the ACLU also plans to designate “freedom cities,” where officials openly defy the Trump administration and federal law, especially when it comes to compliance with immigration statutes.

In reality, the ACLU should designate them “lawless cities” because that’s what the organization is encouraging; lawlessness.

And of course, no good Brown Shirt training program is complete without the customary celebrity immigrant, who now claims that enforcing the law is racist and non-inclusive.

“Lately I’ve started to feel like an outsider,” Padma Lakshmi, an Indian-born cookbook author, actress, model and television host said at the ACLU event over the weekend. “What makes America great is our culture of inclusion. We must not tolerate the intolerance.”

Yes, as usual, the Left’s response to perceived intolerance is always more intolerance. But seriously, since when is enforcing the law intolerant?

The ACLU’s goal is the same one all Leftist Marxist groups share, and that is to create an environment in the United States where political thought and discussion is a one-way street, where any dissent is rebranded not as free speech and expression but as hate and intolerance, and where conservatives are the ones who actually feel out of place in their own country. To enforce this new speech code, cadres of modern-day equivalents of Nazi Brown Shirts are required.

As The National Sentinel noted, some Brown Shirt reincarnates were present on the campus of the University of California-Berkeley recently to shout down, pepper spray, and beat elderly supporters of the president during a “March 4 Trump” event. And yet, not so ironically, the Left and its sycophantic allies in the discredited mainstream media brand Trump and his supporters as the new fascists.  (RELATED: It’s Time To Start Arresting, Prosecuting And Imprisoning The Mindless, Violent Mobs On The Left.)

Make no mistake, the ACLU’s “training program” has nothing to do with “preserving democracy” or “inclusion” or “tolerance.” It has everything to do with imposing a political agenda and ideology on a country that rejected it very soundly at the ballot box last fall.

Nevertheless, the likes of George Soros and the ACLU will continue to agitate and disrupt the presidency of Donald J. Trump as long as he remains in the White House. Time to fight back.