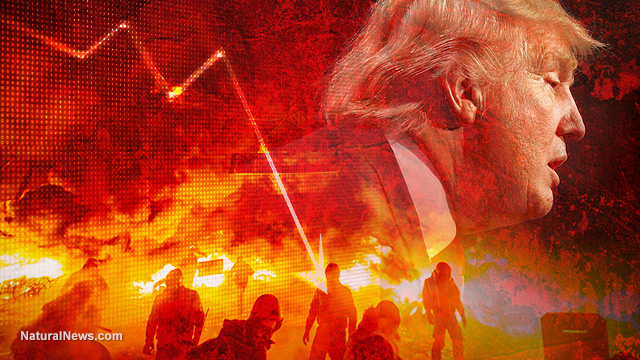 Every day that goes by, more and more Americans become more deeply entrenched and brainwashed into believing what they’re told by their boob tube (television), newspapers, magazines and propaganda-spreading websites, like WebMD, Forbes.com and Slate.com. People become more paranoid and outright delusional about infectious diseases, a Trump Presidency, food allergies and domestic terrorism. People, or sheeple as they should be called, follow all the wrong leaders, the worst advice and their own “expertise” about their health, welfare, finances and safety – and thus become more endangered and poisoned by their state of mind. To them, conspiracy theories are just that, and they’re so afraid to look at the truth that reality actually hurts their souls.

However, for tens of millions of other Americans, the wake up call came and they heeded it this year. That’s why Donald Trump won the Presidency. One look at the number of U.S. states that went “red” on November 8th and 9th is “proof in the pudding.” Everything the “Donald” preached about was proven true, and when videos and leaked emails went viral on social media and Alternative “Truth” Media, the Constitution also came out the victor.

Let’s take a close look at the top 10 “conspiracy theories” that were not only proven true these past few years, but that changed the course of history forever, putting someone in charge of the free world who called the bluff of all the lying globalists and the evil tyranny that ran the U.S. government for the past 24 years (Yes, Obama, Bush and the notorious Bill Clinton).

1. Hillary Clinton and Barack Obama were trying to rig the Presidential election.

2. While Obama and his family eat organic food, they want the rest of the country eating GMOs and dying of cancer and dementia.

3. Nearly all (if not all) of the violent protesting (before and after the election) regarding Trump is paid for and orchestrated by the Clinton Crime Family and George Soros.

5. The U.S. Government wants to force-vaccinate as many children as possible, increasing rates of autism, infertility and abortions.

6. Planned Parenthood’s main goal is to increase the number of African American abortions and sell aborted baby remains (hearts, brains and organs) for cash on the black market.

7. Obama, Bill Gates and other globalists (like Sloan and Rockefeller) believe in genocide and a depopulation agenda, and use GMOs and vaccines to “work the plan” of reducing the world population by billions of people over the next few decades. Here is Bill Gates at a TED conference outright preaching that vaccines can be used for depopulation.

8. Many “top notch” cancer care centers like Karmanos and Sloan Kettering in America are really death camps that breed a slow, miserable death for their “patients” using surgery, chemotherapy, radiation and other dangerous, experimental drugs that rarely, if ever, work.

9. Monsanto hires and pays shills to regurgitate their propaganda as “facts” in order to brainwash Americans into believing GMO food is safe and beneficial for the world. These shills, hucksters, hacks and charlatans include certain journalists, academics, public scientists and FDA officials and regulators.

10. Zika virus is like the flu and has nothing to do with mosquitoes or the birth defects (microcephaly) that the CDC and CNN are hysterically propagating. In fact, cases of Zika date back 50 years to Uganda, Africa, and Southeast Asia as a mild viral infection similar to having a head cold. Symptoms last about a week. Zero cases of microcephaly were documented from the Zika epidemic that affected three quarters of the entire Yap island population. The truth about microcephaly in Brazil was the mass amounts of toxic pesticide dumped into the water supply. The whole scam was about inventing a vaccine for Zika and getting at least 200 million Americans to buy it. The vaccine most likely would have contained mercury, aluminum and formaldehyde in order to create expensive health detriment for more Big Pharma profits.

Bonus! Due to popular demand, we must cover a bonus “realm” of one of the greatest hoaxes of all time that has recently been completely and utterly debunked! Coming in at number 11 is the hoax that made Al Gore a filthy rich, pathetic human being …

11. Global Warming (climate change) is a complete and utter hoax, is not caused by mankind or our actions, and earth is actually at the beginning of a long and slow cooling trend right now. Thousands of scientists have now declared “Catastrophic Man-Made Global Warming” to be a complete hoax and a lie based on zero scientific evidence. What happened then? The mass media spread a great lie across the TV news, newspapers, magazines and the internet. Most Americans now believe that “99 percent of scientists believe in global warming,” even though that statistic is completely fabricated, warped, skewed and comes from a study where only 75 cherry-picked scientists were “interviewed.”

Additional sources for this article include