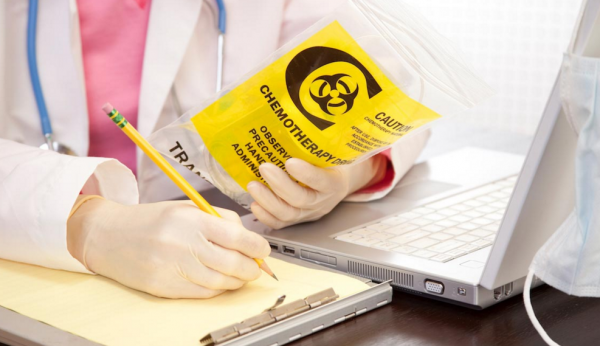 New research has revealed that cancer isn’t the only thing killing cancer patients. Many times, the treatment itself is what turns out to be the cause of death.

For the first time ever, a team of researchers decided to look at how many cancer patients were dying within the first 30 days of chemotherapy treatment. This particular data would indicate that the medication was most likely the cause of death, rather than the cancer.

Data from more than 23,000 women with breast cancer and nearly 10,000 men with 9634 non-small cell lung cancer who received chemotherapy in 2014 was collected for the study. A staggering 1,383 people treated died within 30 days of beginning their regimen.

Chemotherapy is notoriously toxic and is heavily criticized due to its inability to distinguish normal, healthy cells from cancerous ones.

The study, which was led by Public Health England and Cancer Research UK found that across England, 8.4 percent of lung cancer patients and 2.4 percent of breast cancer patients died within just one month of treatment. However, some hospitals exhibited a much higher mortality rate.

For example, at Milton Keynes, the death rate reached a staggering 50.9 percent — albeit, this figure was ascertained from a fairly small number of patients.

Higher-than-average lung cancer patient deaths related to chemotherapy were also seen in Blackpool, Coventry, Derby, South Tyneside, Surrey and Sussex. At Cambridge University Hospital, approximately one out of every five breast cancer patients that participated in palliative care died from from their treatment.

This new research might suggest that palliative chemo isn’t exactly an ideal practice — especially when there are other options to help keep patients comfortable, like medical cannabis. Many of the effects of cancer, such as pain, fatigue and other discomforts can be combated with cannabis. Furthermore, budding research indicates that cannabis may even help to cure cancer.

While mainstream medicine has been wary of marijuana’s benefits for people suffering with cancer, among other conditions, at least this study has inspired questions into the safety and efficacy of current cancer treatment protocols.

Dr. Jem Rashbass, Cancer Lead for Public Health England, notes that chemotherapy “is powerful medication with significant side effects and often getting the balance right on which patients to treat aggressively can be hard.”

Those hospitals whose death rates are outside the expected range have had the findings shared with them and we have asked them to review their practice and data,” she added.

The researchers noted that there were substantial differences in survival rates for older patients or those that were very ill. The team posited that doctors should be more careful when selecting treatments for these patients, as it could do more harm than good.

Professor David Dodwell, from the Institute of Oncology at St James Hospital, located in Leeds, stated, “I think it’s important to make patients aware that there are potentially life threatening downsides to chemotherapy. And doctors should be more careful about who they treat with chemotherapy.

In spite of the obvious reasons for concern about current methods, the Telegraph writes that all of the hospitals mentioned in their article have looked over the cases and “were satisfied that chemotherapy prescribing was safe.”

Whether or not the scientists who actually conducted the study would agree with them, however, is another matter.