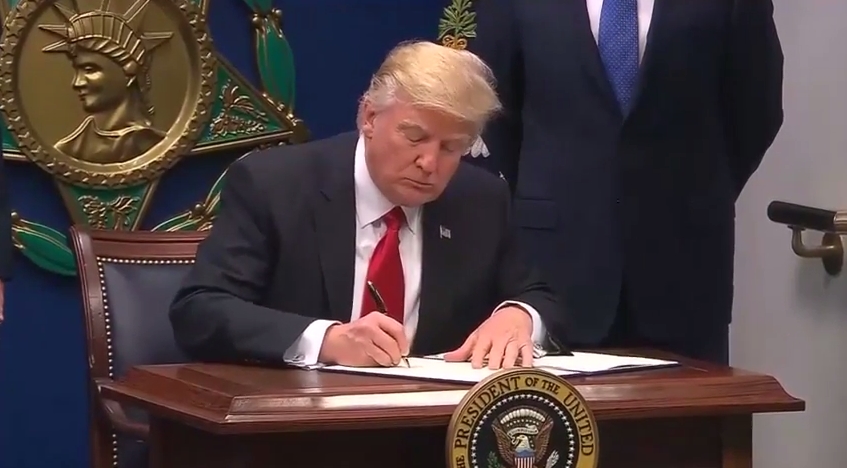 GOP presidential nominee Donald J. Trump made some big promises while on the campaign trail – promises that no doubt led to his historic election victory over a candidate no one in politics or the media thought he could beat.

But they were also promises that he knew he would have to keep if his presidency is to be successful and given The Donald’s yuuuuge drive and energy, there is no reason to believe he wants an “average” presidency.

That said, we’re now just over halfway through his first 100 days, in which he pledged great progress would be made. It’s time to see how the 45th president and America’s most unlikely chief executive is doing. (RELATED: President Trump And Congress Should Keep This One Guiding Principle In Mind When “Reforming” Obamacare)

As reported by The Daily Signal, Trump has made significant progress in a number of areas, while lagging in others. But overall, his report card is good and he’s on track to get even better marks once his first 100 days are in the books:

Now, at the halfway mark of this critical period on Friday — the president has moved at a quick pace addressing the bulk of promised executive actions and proposals — such as taking early steps on border security and increased vetting of immigrants and refugees from Middle Eastern countries.

But there are still significant actions left to make and measures that haven’t been proposed in Congress in this crucial 100-day timeline.

— Border security: Within a few days of taking office, Trump signed executive orders to strengthen border security while directing the Department of Homeland Security to begin enforcing immigration laws as written. Included in those orders were instructions by the president to enforce immigration statutes in the nation’s interior as well, not just at the border. Combatting illegal immigration was Trump’s signature pledge – his opening promise the day he declared his candidacy for the Republican presidential nomination. By all indicators, he is delivering on this pledge.

— National security: Trump also ran on reducing the number of migrants and refugees coming into the country, especially from parts of the world known to be harboring terrorists and terrorist organizations. On this issue, Trump has attempted to deliver on his pledge, but the federal courts have prevented him from fulfilling this pledge. Twice now – in a January 27 executive order and again in a March 6 order – the president has attempted to staunch the flow of potential terrorists into the country, as per authority vested in him by the Constitution and statutory law.

— Obamacare repeal: Trump’s very first executive order was directed at “easing the financial burden” of Obamacare through the granting of waivers, deferments and other actions by agencies charged with enforcing various sections of the Affordable Care Act, a.k.a. Obamacare. And in recent days Republican leaders in the House have introduced the American Health Care Act, which begins the process of repealing Obamacare and which Trump has signaled his support, as well as his willingness to negotiate with lawmakers who are opposed to various portions of it.

— Tax reform: Another major plank in Trump’s platform is a massive overhaul of the nation’s byzantine tax code, which is alternately used to punish and reward certain constituencies. Trump is especially interested in lowering the corporate tax rate, the highest in the developed world, because he says it discourages business expansion and growth in the U.S. But he also wants to provide tax cuts to American workers. A plan hasn’t been offered yet, and in recent days GOP leaders have said they want to get health care reform done first.

— Cutting the size of government: Another key Trump pledge was to “drain the swamp” in Washington, D.C. That pledge has two planks – reducing the influence of special interests, which he did when he signed an executive order banning former Executive Branch employees from lobbying for five years after leaving office; and when he signed an additional order requiring two older regulations to be repealed for every new regulation issued.

Also, Trump’s first budget has sent waves of panic through big government: He is proposing “historic” cuts to the federal workforce – the most since the government drawdown following World War II. Trump has already imposed a federal hiring freeze for all government agencies except the military and those having to do with national security.

While several Washington establishment media are panning Trump’s first 50-odd days in office, given the massive opposition he’s faced, he’s not doing badly at all.