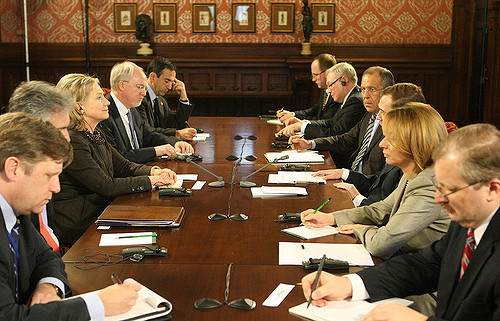 Hillary Clinton’s team members met with the Russian ambassador during the election as well as Donald Trump’s, the Kremlin spokesman has alleged, as he set out to dismiss the “hysteria” surrounding Mr Trump’s links to Russia.

The house intelligence committee will hold its first session on Russia on March 20, with the heads of the FBI, national security agency and CIA expected to appear, plus previous intelligence chiefs.

But Dmitry Peskov, the press secretary for Vladimir Putin, said on Sunday that America was “self-humiliating” in insisting that Russia hacked its election.

And he defended the actions of their ambassador, Sergey Kislyak, whose meeting with Michael Flynn, Mr Trump’s choice of national security adviser, caused Mr Flynn to lose his job. He was fired after just 24 days when it became clear that he had lied about meeting the Russian, and misled the vice president.

“This is what happens all around the world.”

He said that members of Mrs Clinton’s team had also met with Mr Kislyak, although he did not give specifics.