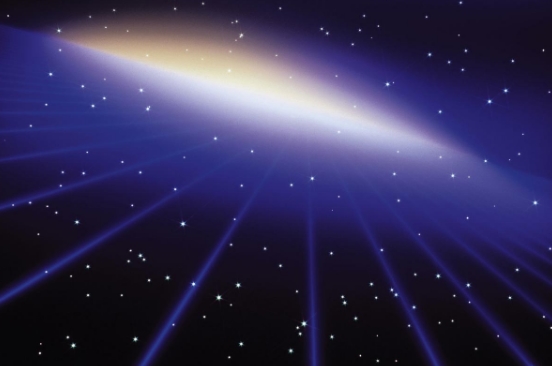 Bizarre flashes of cosmic light may actually be generated by advanced alien civilizations, as a way to accelerate interstellar spacecraft to tremendous speeds, a new study suggests.

Astronomers have catalogued just 20 or so of these brief, superbright flashes, which are known as fast radio bursts (FRBs), since the first one was detected in 2007. FRBs seem to be coming from galaxies billions of light-years away, but what’s causing them remains a mystery.

“Fast radio bursts are exceedingly bright given their short duration and origin at great distances, and we haven’t identified a possible natural source with any confidence,” study co-author Avi Loeb, a theorist at the Harvard-Smithsonian Center for Astrophysics, said in a statement Thursday (March 9). “An artificial origin is worth contemplating and checking.” [5 Bold Claims of Alien Life]

One potential artificial origin, according to the new study, might be a gigantic radio transmitter built by intelligent aliens. So Loeb and lead author Manasvi Lingam, of Harvard University, investigated the feasibility of this possible explanation.

The duo calculated that a solar-powered transmitter could indeed beam FRB-like signals across the cosmos — but it would require a sunlight-collecting area twice the size of Earth to generate the necessary power.

And the huge amounts of energy involved wouldn’t necessarily melt the structure, as long as it was water-cooled. So, Lingam and Loeb determined, such a gigantic transmitter is technologically feasible (though beyond humanity’s current capabilities).