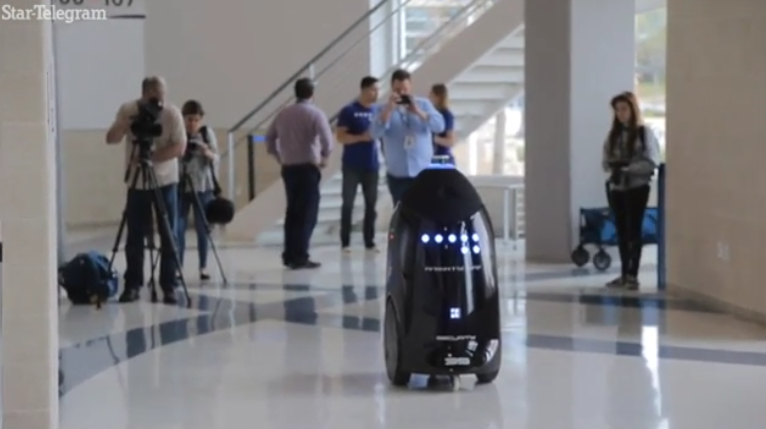 Maybe someday it will menacingly order citizens to drop their weapons — or else  a la Robocop.

But for now, the Knightscope crime-fighting robots, demonstrated for the University of Texas at Arlington Police Department and the media on Thursday, are limited to less aggressive tasks like scanning license plates for unauthorized vehicles or alerting authorities to people in restricted areas.

Or, for mall bots, telling shoppers how to get to Macy’s. And they’re always videotaping and collecting data, including markers that help identify nearby wireless devices. Those latter skills helped solve a robbery recently.

But Knightscope co-founder and former UTA student Stacy Stephens has much higher expectations for the technology.

“Long-term, our ultimate goal is to be able to predict and prevent crime,” he said, by analyzing past data with real-time, on-site information collected by the robots. “Then maybe we have the ability to put the robots into a patrol state where they are hitting those hotspots.”

The demonstration model rolling slowly around the halls of UTA’s College Park Center on Thursday morning was the Knightscope K3, a 4-foot-4, 300-pound, bullet-shaped robot, which looked like a slower version of the motorized — and creepy — tackling dummies showing up on more NFL practice fields.