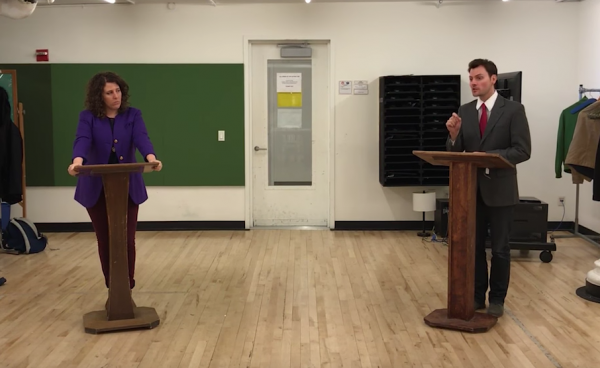 It seems like today, American colleges and universities are more focused on teaching students how to be “diverse” and “tolerant,” than they are on traditional education. Young people graduate not knowing how to get a job or pay taxes, but ask them about social justice, and they’ll tell you everything you want (or don’t want) to know.

At New York University, professors Maria Guadalupe and Joe Salvatore designed an experiment that was meant to demonstrate the fact that Americans would not have accepted Trump’s over the top behavior had he been a woman. To prove this, the professors acted out the 2016 presidential elections with the gender roles switched; that is, with Hillary Clinton as a man and Donald Trump as a woman.

Guadalupe and Salvatore had hoped that students would overwhelmingly support the male version of Clinton over the female version of Trump, which they would then point to as an example of gender bias. Unfortunately for them, the opposite turned out to be true. Female Donald Trump actually gained more support than male Hillary Clinton, thus implying that Hillary would have been even less likable if she were a man, not more.

“We both thought that the inversion would confirm our liberal assumption—that no one would have accepted Trump’s behavior from a woman, and that the male Clinton would seem like the much stronger candidate,” said Salvatore. “But we kept checking in with each other and realized that this disruption—a major change in perception—was happening. I had an unsettled feeling the whole way through.”

Professor Salvatore went on to say that many of the students in the audience walked away with a new understanding of how Donald Trump had defeated Hillary Clinton last November. “The simplicity of Trump’s message became easier for people to hear when it was coming from a woman,” Salvatore explained.

One female student who was sitting in the audience told The New York Times, “When she [the female version of Trump] was attacking, I had so much respect for her and her level of confidence.”

The professors may not have been able to demonstrate the gender bias that they thought existed in the presidential election, but the experiment still delivered an important message: Donald Trump won the election and is now sitting in the Oval Office, not because he’s a man and Hillary Clinton is a woman, but because he is Donald Trump – and that really says it all.