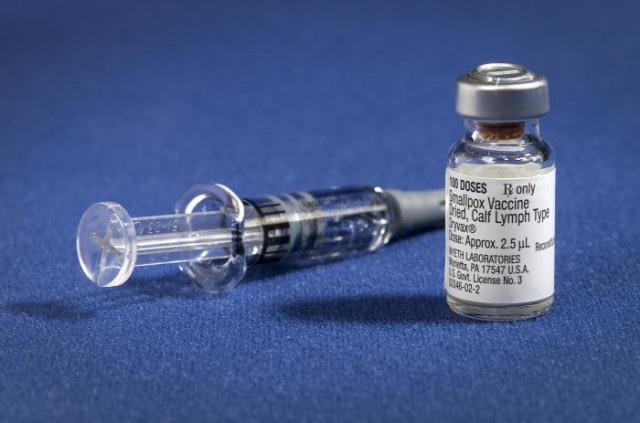 • Aluminum – A toxic metal linked to dementia and Alzheimer’s disease. You should never inject yourself with aluminum, obviously. Read the Natural News article: Aluminum in vaccines linked to Alzheimer’s and other neurological conditions.

• Antibiotics – Chemicals that promote superbugs, which are deadly antibiotic-resistant strains of bacteria that are killing tens of thousands of Americans every year. Antibiotics wipe out your gut flora, inhibiting your digestive health and immune response.

• Formaldehyde – A “pickling” chemical used to preserve cadavers. It’s highly toxic to the nervous system, causing blindness, brain damage and seizures. The U.S. Department of Health and Human Services openly admits that formaldehyde causes cancer. You can see this yourself on the National Toxicology Program website, featuring its 12th Report on Carcinogens.

There, the formaldehyde Fact Sheet completely neglects to mention formaldehyde in vaccines. This is the “dirty little secret” of government and the vaccine industry. It does state, however, that “…formaldehyde causes myeloid leukemia, and rare cancers including sinonasal and nasopharyngeal cancer.”

• Monosodium Glutamate (MSG) – A neurotoxic chemical called an “excitotoxin.” It causes brain neurons to be overexcited to the point of death. MSG is toxic even when consumed in foods, where it causes migraine headaches and endocrine system damage. You should NEVER inject MSG into your body. But that’s what health workers do when they inject you with vaccines.

• Thimerosal – A methyl mercury compound that causes severe, permanent nervous system damage. Mercury is highly toxic to the brain. You should never touch, swallow or inject mercury at any dose. There is no safe dose of mercury! Doctors and vaccine pushers LIE to the public and often say there’s no mercury in vaccines. Yet even the CDC readily admits vaccine still contain mercury (thimerosal). Natural News has even published this letter from California HHS Secretary Diana Dooley urging the use of mercury-containing vaccines for immunizations of children.

In addition, National Toxicology Programs admits in its own documents that:

• Vaccinations “…may produce small but measurable increases in blood levels of mercury.”

• “Thimerosal was found to cross the blood-brain and placenta barriers.”

• The “…hazards of thimerosal include neurotoxicity and nephrotoxicity.” (This means brain and kidney toxicity.)

• “…similar toxicological profiles between ethylmercury and methylmercury raise the possibility that neurotoxicity may also occur at low doses of thimerosal.”

• “… there are no existing guidelines for safe exposure to ethylmercury, the metabolite of thimerosal.”

The report then goes on to say that the FDA studied thimerosal and somehow found it to be perfectly safe. It also states that vaccine manufactures are “working” to remove thimerosal from vaccines, but in reality it’s still being manufactured right into the vaccines.

By the way, this report also reveals that the FDA requires preservatives like thimerosal only in so-called “multi-dose” vaccines — vials that contain more than one dose of the vaccine. Drug companies could, if they wanted to, produce “clean” single-dose vaccines without any mercury / thimerosal. But they choose not to because it’s more profitable to product mercury-containing multi-dose vaccines. As the report admits, “Preservatives are not required for products formulated in singledose vials. Multidose vials are preferred by some physicians and health clinics because they are often less expensive per vaccine dose and require less storage space.”

So the reason why your child is being injected with mercury in vaccines boils down to health care offices making more money and saving shelf space.

I’ve been told by delusional “skeptics” and doctors that there’s no such thing as mercury in vaccines, and that any such suggestion is nothing more than a “wild conspiracy theory.” That just goes to show you how ignorant all these people truly are.

All they have to do is visit this CDC vaccine additives web page, which openly admits to these chemicals being used in vaccines right now. It’s not a conspiracy theory, it turns out. It’s the status quo of modern-day vaccine manufacturing.

And just in case the CDC removes that page, here’s a screen shot, taken October 22, 2012, showing exactly what was on the CDC vaccine additives page: Nearly five years later, in 2017, I took another screen shot of the same page from the CDC: Guess what? The two snapshots of the CDC’s vaccine ingredients page are nearly identical. This confirms that for at least the last five years, the CDC has openly admitted that mercury, MSG, aluminum, antibiotics and formaldehyde are used in vaccines… yet the fake news media continues to knowingly lie to the public, falsely claiming vaccines don’t contain mercury at all. It’s pretty obvious at this point that they’re lying. (They just hope the sheeple are too dumbed down to notice…)

Feel that headache after a vaccine? That’s the feeling of chemicals eating your brain

Now, consider this: The most common side effect of a vaccine injection is a headache. The CDC admits that over 30 percent of those receiving vaccines experience headaches or migraines. Think about it: What could possibly be in vaccines that would cause headaches, migraines and brain damage?

Ummm, how about the mercury, the formaldehyde, the aluminum and the MSG?

Even if you believe in the theory of vaccines as a helpful way to train the immune system to recognize pathogens, why would anyone — especially a doctor — think it’s okay to inject human beings with mercury, MSG, formaldehyde and aluminum?

The argument of the vaccine pushers is that each vaccine only contains a tiny dose of these highly toxic substances, and therefore it’s okay to be injected with them. But this argument makes a fatal error: U.S. children are now receiving over twenty vaccines by the time they’re six years old. What’s the cumulative effect of all these vaccines, plus the mercury from dental fillings and dietary sources? What’s the effect of injected mercury on an immune-suppressed child living in a state of chronic nutritional deficiency?

Scientists don’t know that answer because such studies have never been conducted. So they pretend that nothing bad will happen and keep pushing more and more vaccines on infants, children and even expectant mothers. They’re playing Russian roulette with our children, in other words, where every injection could cause a seizure, coma, autism or death. Then they call parents “quacks” when they dare question the safety of dangerous vaccines. Apparently, if you are a rational person who wants to reduce vaccine risks for your child, you are some kind of anti-science heretic who will be shamed and shouted down until you relent.

Why doesn’t the vaccine industry offer “clean” vaccines free from all toxic additives?

If vaccines are supposed to be good for you, why do they contain so many additives that are BAD for you? You wouldn’t want to eat mercury in your tuna fish. You wouldn’t want MSG in your sandwich, and you certainly wouldn’t want formaldehyde in your soda. So why would you allow yourself to be injected with these deadly substances, even in small amounts?

And just as importantly, why wouldn’t the vaccine industry offer CLEAN vaccines? Without any brain-damaging additives?

Think about it: When you buy health food, you want that health food to have NO mercury, NO MSG, NO aluminum and certainly no formaldehyde. No sane person would knowingly eat those neurotoxic poisons. And yet, astonishingly, those same people literally line up to be injected with those exact same brain-damaging poisons, with the justification that, somehow, “This injection is good for me!”

But hold on a second: I thought the theory behind vaccines was that weakened viruses would give the immune system a rehearsal so that it would build up antibodies to the real thing. Where does mercury, MSG or formaldehyde fit anywhere in that theory? Does your body benefit in any way from exposure to formaldehyde? Of course not. The very idea is ludicrous.

So are there such things are clean vaccines? I challenge you to try to find one. They simply don’t exist for the population at large. Nearly all vaccines for the masses are deliberately formulated with neurotoxic chemicals that have absolutely nothing to do with the science of vaccinations, but everything to do with autism, Alzheimer’s disease, early-onset dementia, immune suppression, and the mass dumbing down of brain function.

Via this article at Natural News:

Robert F. Kennedy Jr., Chairman of the World Mercury Project (WMP), announced a $100,000 payout to anyone who can find a credible scientific study proving Thimerosal is safe to inject into children at the concentrations currently administered in today’s vaccines.

Thimerosal, a mercury-containing preservative, is still in 48 million U.S. flu vaccines each year, tetanus toxoid, meningococcal vaccines and, in massive doses, in the pediatric vaccines given to 100 million children across the developing world. A Centers for Disease Control (CDC) review published last month found that the ethylmercury in thimerosal is as profoundly neurotoxic as the heavily regulated methylmercury in fish.

In 2004, an FDA official acknowledged in testimony before a Congressional committee that no government or privately funded study has ever demonstrated thimerosal’s safety, and that still stands today.“On one hand, the government is telling pregnant women which mercury-laced fish to avoid so that they don’t harm their fetuses, and on the other, the CDC supports injecting mercury-containing vaccines into pregnant women, infants and children,” said Kennedy, who spent decades litigating polluters who dumped mercury into water systems. “This defies all logic and common sense.”