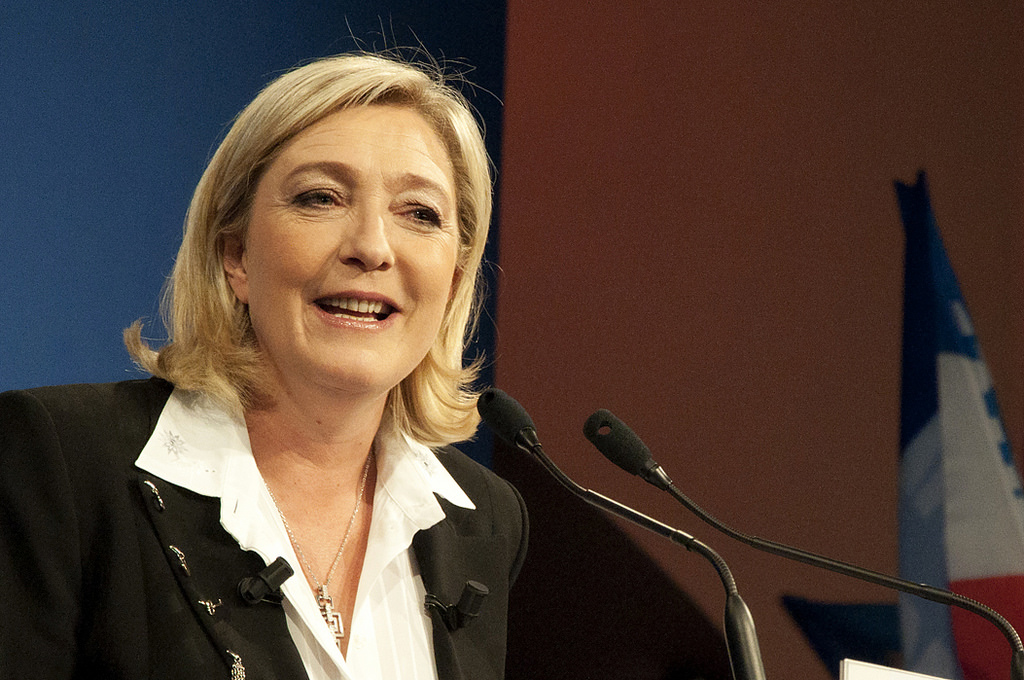 Nationalist French presidential contender Marine Le Pen continues to gain popularity, as evidenced by her rising poll numbers because she refuses to prostrate herself at the altar of political correctness.

In recent days, as Reuters reported, she even canceled a meeting with a Lebanese Islamic figure because she wasn’t about to don a headscarf, as he demands of all women, because she’s French and, well, French women who are Muslims don’t do that.

Le Pen used a two-day visit to Lebanon, a former French colony, this week to shore up her foreign policy credentials a little more than two months before the April 23 first round of presidential voting. The visit was also viewed by some political commentators and observers as a way for Le Pen to bolster her approval among Franco-Lebanese voters. (RELATED: Fascist Google begins PURGE of pro-Trump websites as prelude to massive false flag or coup attempt)

Scores of Lebanese fled their country to France, where many became citizens, during the Middle Eastern nation’s civil war, which lasted from 1975 to 1990 and destroyed much of the country. Since then much of Lebanon has been restored.

But she backed out of the meeting with Derian after he insisted she don a headscarf.

“I met the grand mufti of Al-Azhar,” she said in an ad hoc presser with reporters, a reference to her 2015 visit to the 1,000-year-old center of Islamic teaching in Cairo, Egypt. “The highest Sunni authority didn’t make me have this requirement, but it doesn’t matter. You can pass on my respects to the grand mufti, but I will not cover myself up.”

Derian’s press office said Le Pen’s aides were told before the meeting she would have to wear a headscarf and were “surprised by her refusal” to do so, Reuters reported.

French law bans headscarves in the public service and for high school pupils, in the name of church-state separation and equal rights for women. Le Pen wants to extend this ban to all public places, a measure that would affect Muslims most of all.

So they shouldn’t have been “surprised” by her refusal to comply with the grand mufti’s demand. Anyone who is familiar with Le Pen and her rise to prominence in France knows that she’s not someone who will be cowed into compliance to a foreign religious doctrine, especially after her country has been rocked by a series of Islamic terrorist attacks.

Le Pen’s rise has mirrored that of President Donald J. Trump’s in the United States. Both are unabashed supporters of their own countries’ interests first and foremost, and both have a populist message that is resonating with tens of millions of voters who are fed up with the globalist status quo.

In fact, the globalist view of migration and refugee resettlement – which is to say, there ought to be no limits to either – wore thin on Americans and it is wearing thin on French citizens as well. Like Trump, Le Pen has advocated aggressively taking on Islamic extremism no matter where it exists, because both understand the existential threat it, particularly for the West, which is seen as decadent and offensive in the Muslim world. (RELATED: ISIS Operatives Infiltrated Europe As Early As 2014: Report)

Le Pen also believes, in disagreement with virtually every other country in the globalist EU, that Syrian President Bashar al-Assad is a much better choice to keep in power than allowing the Islamic State to take power from him (though there is little left of Syria to actually govern after years of internal conflict).

Naturally, Le Pen was heavily criticized for her refusal to comply. And of course, the same labels were applied to her as have been applied to Trump.

“I hope France will make a better choice than this fascist right,” Walid Jumblatt, the main political leader of the minority Druze community in Lebanon, told Reuters. “We cannot ask the Lebanese people to forget the crimes of the Syrian regime against it and we cannot return en masse (Syrians) while there is the Syrian regime. It’s a double insult.”

Right; forcing a Western woman to comply with someone else’s religious requirements when she is not a follower of that religion isn’t insulting – to Le Pen and her millions of French supporters.