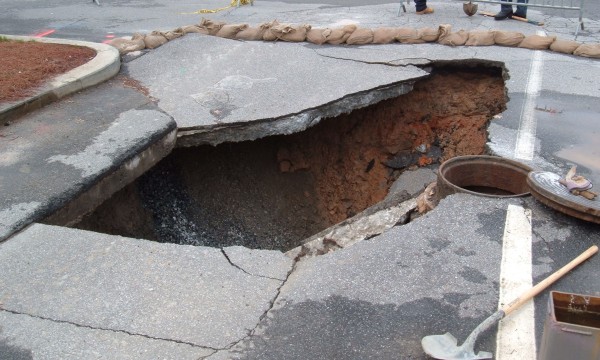 Subsidence, which is defined as the gradual caving in or sinking of an area of land, has been causing mysterious holes to appear all over the Cho Don District of the northern mountain province of Bac Kan, Vietnam.

At least 20 holes have been reported so far, and scientists are gravely concerned. Each of the holes is between 6 ½ and 16 feet in width, and from 6 ½ to 10 feet deep.

The Ban Tan hamlet in a town called Bang Lung has been the hardest hit, with more than 10 of the mysterious holes. A cause of great concern is the fact that some of the holes have appeared in water springs, causing some of them to dry up and resulting in shortages of both drinking water and the water needed for farming.

In addition to the holes, very long cracks, hundreds of feet in length, have also started popping up all over the place.

Farmers have been hit hard, with many of them losing ponds and finding cracks in their fields and even the foundations of their houses.

One farmer lost 440 pounds of fish in a single day when a hole suddenly appeared in his pond.

This is not the first time this area has been hit with the effects of subsidence, but the scope of the problem is far greater this time, making it much more serious.

Scientists who looked into the cause of the subsidence say that there are two main causes: First of all, most of northern and central Vietnam is characterized by what is known as karst topography. Put simply, karst topography is a landscape peppered with rocks such as limestone, dolomite and gypsum that can be dissolved by either surface or underground water. Scientists have found that underground caverns tend to develop in areas with karst topography, and external disturbances like drilling, fracking and the construction of foundations can cause these caverns to collapse. The second thing that seems to have contributed to the development of the giant holes is the pumping of ground water. (RELATED: Speaking of fracking, what are the latest developments on this controversial front? Stay in the know at Fracking.news)

It would seem sinkholes are a recurring problem in Vietnam. In September of last year, The Voice of Vietnam reported that a huge sinkhole, 39 feet long, 30 feet wide and 33 feet deep, had developed in the middle of a national highway, bringing traffic to a screeching halt. The sinkhole started out small in August, but ongoing rain caused it to keep expanding. (RELATED: While Vietnam’s mysterious sinkholes are explainable, many other phenomena are not. Read about some of these at Unexplained.news)

It seems that the strange phenomenon of mysterious sinkholes is likely to continue for some time to come in Vietnam.