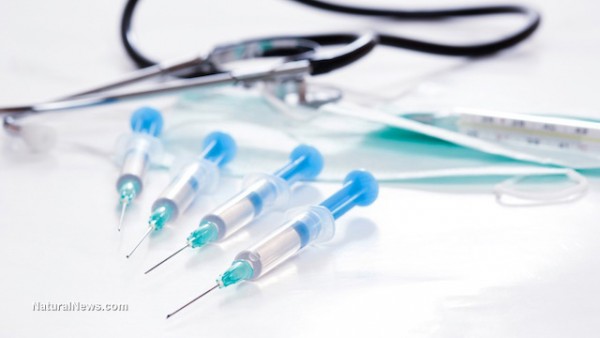 The safety and efficacy of vaccination has been in question for quite some time now. The mainstream media and other proponents of immunization have continued to purport the myth that vaccines are completely, 100 percent safe — a so-called fact that actual science continues to prove false.

A recent study published in early 2017 by the International Journal of Vaccines and Vaccination found that many vaccines are contaminated with micro- and nano-sized particles, which are comprised of inorganic compounds. The researchers say that these compounds they discovered were not listed on any ingredients lists, and described their presence in the vaccines they tested as “inexplicable.”

The research, led by self-funded scientists from the National Council of Research of Italy and the International Clean Water Institute, USA presents clear, undeniable information that demonstrates the questionable nature of vaccines.

To conduct their research, the team of scientists analyzed 44 vaccines collected from two countries: Italy and France. A number of different vaccines from a variety of manufacturers were used; flu vaccines, HPV vaccines, DTAP vaccines, and MMR vaccines are just a few of the different types of immunizations that were tested. Some of the manufacturers included in the test were Novartis, GlaxoSmithKline, Sanofi Pasteur, Pfizer, and Wyeth Pharmaceuticals, among several others.

You can see that several of the top pharmaceutical companies and most widely criticized vaccines were represented in this study.

The team of researchers used what is known as a Field Emission Gun Environmental Scanning Electron Microscope that was equipped with an X-ray microprobe in order to verify the presence of contaminants in each vaccine.

One of their most startling findings was the presence of lead in the Gardasil, Ceravix, Typhym, Agrippal S1, and Meningitec vaccines. Many other types of inexplicable metals, such as aluminum, stainless steal, and antimony were also found in a number of the 44 tested vaccines.

According to the researchers, their findings have shown that some of these particles are actually embedded in a biological substrate, which they believe are likely proteins, endo-toxins, and residues from bacteria. The study authors explain that when a particle comes into contact with proteic fluids, “a nano-bio-interaction occurs and a ‘protein corona’ is formed.”

“The nano-bio-interaction generates a bigger-sized compound that is not biodegradable and can induce adverse effects, since it is not recognized as self by the body,” they illustrated further.

The researchers say that the quantity of “foreign bodies” and the “unusual chemical compositions” they detected in the vaccines they tested were “baffling.”

The team notes that the inorganic materials found in these vaccines were not biodegradable or bio-compatible. “[T]hat means that they are biopersistent and can induce effects that can become evident either immediately close to injection time or after a certain time from administration,” they explain.

In  their discussion, the researchers write that given the contamination which was seen in every vaccine tested, they believe that the possibility of adverse effects after injection is very real and credible — but note that these effects are indeed going to be random and dependent on where the contaminants are carried to via circulation.

They also state, “It is only obvious that similar quantities of these foreign bodies can have a more serious impact on very small organisms like those of children.”

The team also acknowledged that aluminum, which is often listed as a adjuvant in vaccines, is known to have negative neurological effects. Vaccines already knowingly contain potentially hazardous ingredients, and the researchers posit that the presence of additional, unknown contaminants will only increase their potential for adverse effects.

In 2014, the RAND Corporation even published research documenting the hazardous effects associated with vaccine administration. Several vaccines were strongly linked to febrile seizures, while others were linked to diseases like pneumonia and meningitis and even nervous system disorders like Guillain-Barré syndrome.

Whether or not the contamination of vaccines is intentional or simply accidental remains to be seen.