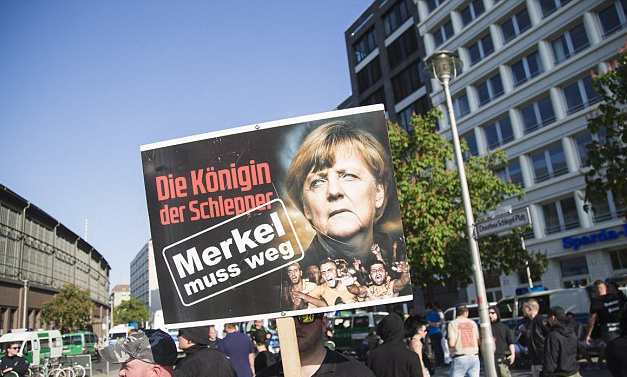 After being lambasted for allowing tens of thousands of un-vetted migrants to surge through her country’s borders, Germany’s chancellor Angela Merkel is having a sudden change of heart. Reports indicate that the failed leader, who one popular news magazine accused of “destroying Europe,” is now offering cash handouts worth millions of dollars to get these migrants to leave.

It’s a case of too little, too late — not to mention a monumental waste of taxpayer funds — what Merkel is trying to do, but she’s trying to do it anyway. The U.K.’s Daily Mail says the effort is supposed to quell anger over Merkel’s reckless “open-door” border policy that has already allowed some 1.2 million migrants, many of them young, fit men, to flood into Germany and set up shop, against the interests of the German people.

The mainstream media is calling the move “embarrassing,” as it serves to further indict Merkel as both incompetent and utterly corrupt. But if it gets rid of a problem that has greatly increased crime and created considerably unstable conditions throughout Deutschland, then so be it. If the plan is a success, it will help to speed up the deportation process of some 450,000 migrants who have been rejected asylum.

According to the latest reports, the euro equivalent of nearly $100 million has been set aside by Merkel as incentive money to convince as many so-called “refugees” and unknown migrants who she let in to leave. So not only have Germans been subsidizing their stay while watching their cultural fabric be torn to shreds, but now they are having to subsidize their removal.

“Many will see the move as a desperate attempt for Miss Merkel to claw back support ahead of her challenging re-election bid in September,” writes Mario Ledwith for the Daily Mail. “Criticism of her decision to leave Germany’s borders open and welcome all refugees during Europe’s migration crisis in 2015 has led to a surge in support for anti-immigrant parties.”

The problem reached a crescendo back in December when a migrant led an attack on a Christmas market in Berlin, bringing to the forefront the utter failure of Merkel’s open-door borders policy. Many Germans rallied around stopping Merkel from continuing such carnage, and since that time she has engaged in a major U-turn to try to salvage her already disastrous legacy.

At the same time, Merkel’s relenting to reality will have positive benefits for Germany’s immigration policies moving forward. Part of this latest plan will involve recreating the immigration process by establishing a new department in Berlin that will handle mass deportations. If populist sentiment ultimately wins out as it has in other places like the U.S. and the U.K., then it’s presumable that, moving forward, Germany will reign in its open-borders policy and better protect its sovereignty.

The 16-point plan also includes establishing a number of “federal departure centres” near airports to expedite the removal process of the unwanted migrants. The hope is that continuing to deport those who have already been rejected asylum, along with offering cash incentives for many others to leave voluntarily, will clean up the country rapidly without causing too much tumult to Germans’ day-to-day survival.

According to reports, roughly 170,000 applications for asylum were rejected last year in Germany, and of these 55,000 decided to leave voluntarily. Another 26,000 were reportedly repatriated.