Uncensored and Independent Media News
Home
Health Freedom
Second Amendment
Prepping
Survival
Censorship
Subscribe
SHOP
Popular Articles
Trump the Braveheart: Any other Republican would have caved by now, but Trump refuses to be bullied or destroyed by the commie-run media
02/16/2017 / By JD Heyes / Comments 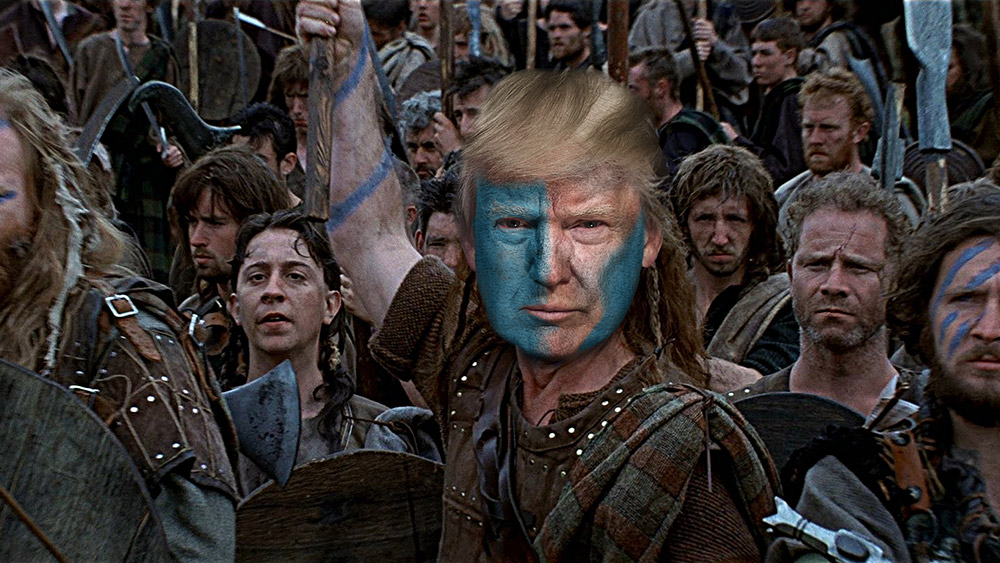 Mel Gibson’s 1996 blockbuster film “Braveheart,” based on the true story of Sir William Wallace, who led a 13th-century war of Scottish independence from England, featured a man standing strong against overwhelming odds to bring freedom to his country.

At his press conference Thursday, Trump once again proved his mettle and steadfastness in the face of controversy – manufactured though it is by the Left-wing Washington media – as he stood strong for all Americans in fending off attack after attack by a press corps largely dedicated to ensuring he fails as president.

The bogus narrative that Russia hacked the election was in full force again this week as newspapers like The New York Times and other Leftist news networks claimed that “sources in and out of the U.S. government” said their might – might – have been ‘some contact’ between Trump campaign officials and Russian intelligence. But in its report the Times reported nothing, essentially – just more unproven allegations sprinkled with the aura of officialdom because some unnamed “American officials” were speaking. As The National Sentinel reported:

This report claims to be based on information provided by “four current and former American officials.” But like earlier reports, there isn’t much in the story other than insinuations; the Time even reported that officials “have seen no evidence” Trump or his campaign worked with the Russians…

The establishment press has been relentless with Trump, as he pointed out in his Thursday presser, vomiting information spoon-fed to various outlets by the anti-Trump elements within the deep state in a manner that is a huge violation of U.S. statutory law. Indeed, Trump took the media to task for even publishing the information, which, frankly, is aiding and abetting the leaks and is in and of itself a violation of federal law governing classified material.

Every day there seems to be a new narrative. A few days after his inauguration the media claimed Trump was “obsessed” with the size of the crowd, which was much larger than CNN and others made it appear. But it was not something Trump was obsessed with, and to claim that it was, as some networks did, is absurd.

Next, the media tried to create a controversy over Trump’s discussion of the inaugural crowd size during his first visit to the CIA. The narrative: Trump was insensitive to the men and women of the agency who have given their lives for their country because he obsessed over the crowd standing before a memorial wall dedicated to the fallen. Only, the same media did not find any outrage, Breitbart News reported, when President Obama railed against the Bush administration’s interrogation techniques, “impugning the integrity of the CIA and giving valuable information to terrorists.”

Another bogus narrative: The immediate next-day protests against Trump by women was important, somehow, in the great scheme of things. Except that it wasn’t. The only purpose it served was as a continuation of the unhinged Left’s hatred of Trump and its refusal to accept that billionaire real estate mogul and former reality TV host could best the anointed – and wholly uninspiring – Hillary Clinton, who lost her second bid for the White House to a guy who once knocked out WWE’s Vince McMahon on Wrestlemania.

The point is, the onslaught against Trump – which, frankly, is just beginning – would have cowed a typical Republican politician. Anyone who has observed politics for any length of time knows that most Republicans, when they get targeted by the media, are quick to reverse themselves and back away from a fight – or manufactured ‘controversy.’ But the media has been relentless against Trump, and he hasn’t been rattled, slowed or moved him off his agenda. (RELATED: Note to the GOP: Get a grip and REPEAL Obamacare)

In fact, Trump has taken on the media, and the deep state it promotes, like a valiant hero of old.