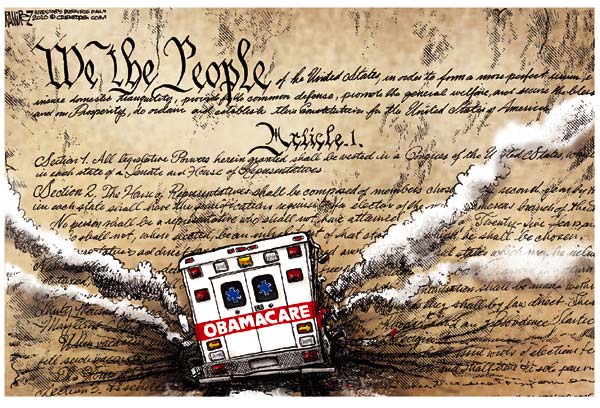 In a stunning display of willful ignorance, House Minority Leader, Representative Nancy Pelosi (D-CA), during a recent town hall on CNN, made the laughable statement that the healthcare debacle known as “Obamacare” has “succeeded in every way,” leaving millions of people who see the Affordable Care Act (ACA) as a nightmare for their pocketbooks scratching their heads and asking, “What, exactly, has been a success, Ms. Pelosi?”

The Obamacare rollout was, as most Natural News readers probably know, nothing short of a complete and utter disaster. But even worse have been its residual effects on premiums and healthcare costs as a whole; what was supposed to be “affordable” care, it turns out, has actually become more expensive. And then there is the “if you like your doctor, you can keep your doctor” fairy tale nonsense promised by the former president.

No matter how you look at it, Obamacare has hardly lived up to all the hype. It has created all sorts of problems for the millions of hard-working Americans who can no longer afford to have health insurance. Where is the affordability for them, or their children and grandchildren that, apart from a full repeal, will also have to suffer under the weight of its burdensome mandates? (RELATED: Read RIGGED.news for coverage of how the health care system is rigged against the people.)

In Pelosi’s view, the law itself had three primary purposes and somehow, in her mind, all three have been achieved: increasing healthcare coverage; improving healthcare benefits; and lowering healthcare costs. Tens of millions of Americans would strongly disagree with her estimates, but this is her view, and presumably the view of her Democratic allies fighting tooth and nail to defend their precious healthcare bill.

“Some of the costs are still going up because of the costs of prescription drugs,” she admitted, adding though, that these costs are supposedly increasing at a much slower rate following the bill’s passage and enactment than at any other time that such metrics have been measured.

Pelosi also said about a month ago that she believes Obamacare was “bipartisan” legislation, and that both sides have been on board with its agenda since the beginning, despite the fact that it passed without a single Republican vote. Still, Pelosi remains insistent that the only “tweaks” made to the law involved certain budgetary measures.

Many readers will recall that Pelosi was the same individual who back in 2010, when asked on NBC News’ Meet the Press by host David Gregory what the bill entailed, stated that, “We have to pass the bill so that you can find out what is in it, away from the fog of the controversy.” Based on this statement, some assumed that Pelosi herself did not actually know what Obamacare fully entailed prior to voting for its passage.

From the very beginning, Pelosi has apparently been under some strong delusion about the merits of Obamacare that nobody else besides her can see. She thought Obamacare was a good thing without knowing what was in it; she thought it had bipartisan support even though no Republicans backed it; and she now thinks that it has succeeded in every way, even though it has accomplished essentially nothing positive in the public interest. In essence Pelosi seems knee-deep in disinformation or self-delusion over the reality of how Obamacare has hurt so many American families in so many ways.

Considering that Nancy Pelosi has been wrong so many times on so many things over the years, how can anyone really trust anything she says anymore? It seems as though Pelosi is really losing her connection with reality at this point, or is so disconnected from how real people are being impacted by her precious Obamacare that she is willing to say anything — even blatant lies — to defend it. Now, Pelosi is spewing nothing but liberal propaganda rather than anything rooted in reality.