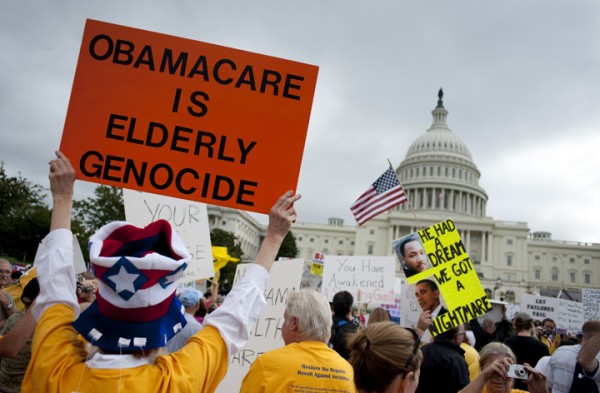 In comments to CNN that were reported by The Hill, Sen. Ron Johnson, R-Wis., used language like “repair” Obamacare, because he and other GOP leaders are more concerned about the optics of repeal than they are about actually doing the right thing for the country.

As such, Johnson and others are now making excuses as to why they cannot just repeal the law as they promised.

“I think more and more people are, as they’re starting to take a look at the daunting task of how do you start repairing the damage of ObamaCare, realizing it’s not particularly easy,” he said, adding that Republicans will now have to work with Democrats to get any repeal done because of the Senate’s 60-vote filibuster threshold.

In a word, Johnson is lying. There’s just no diplomatic way of saying this.

To prove it, we need to remember how the Democratic majority passed Obamacare in the first place. So let’s review: They did it through the budget reconciliation process. (RELATED: What new threats to your freedoms and liberties are they passing today? Find out at BigGovernment.news)

What’s that? As noted by the Center on Budget and Policy Priorities, the process comes from the Congressional Budget Act of 1974, which “allows for expedited consideration of certain tax, spending, and debt limit legislation.”

Since lawmakers never wanted partisan politics to hold up the process of paying the country’s bills, budget measures require only simple majorities in both chambers of Congress to pass; this means that in the Senate, budget reconciliation bills are not subject to the filibuster rule, requiring 60 votes to pass.

As the CBPP notes:

The Congressional Budget Act permits using reconciliation for legislation that changes spending, revenues, and the federal debt limit.  On the spending side, reconciliation can be used to address “mandatory” or entitlement spending — that is, programs such as Medicare, Medicaid, federal civilian and military retirement, SNAP (formerly known as food stamps), and farm programs — but not Social Security.  Mandatory spending is determined by rules set in ongoing authorizing laws, so changing spending usually requires amending those laws.  Reconciliation has not been used to change “discretionary” spending, which is spending controlled through the annual appropriations process. [Emphasis added]

There’s more. Since midway through the Reagan administration, rules of the Senate have not allowed the inclusion of measures in reconciliation bills that change the level of spending, revenues or the debt limit. This is important to note, because though Obamacare mandated additional spending (primarily in the form of subsidies – which are provided via Medicaid), the law also included several tax increases to cover the additional costs. So, theoretically then, the law did not change the spending levels or revenues, and never addressed the debt limit.

So, for Johnson and others to now claim that the Republican congressional majority can’t fully repeal and replace Obamacare in exactly the same way that Democrats passed it – by making Obamacare part of the federal budget – is utter nonsense. Some Senate Republicans, including Johnson, are now claiming that the Senate parliamentarian, a federal bureaucrat whose job it is to know the chamber’s rules, says it would take the 60 votes necessary to overcome the filibuster rule, but as we’ve demonstrated, that’s nothing but political smoke.

If the Senate parliamentarian allowed Obamacare to be part of budget reconciliation in order to become reality in the first place, there is no rule the parliamentarian can cite now that would prevent its repeal.

So why are Republicans getting cold feet? Simple: The optics of repeal. The establishment media and Democrats are waiting to pounce on them for “taking away healthcare coverage from poor, suffering Americans,” and the GOP leadership doesn’t want to put itself in that position. It’s the same reason that no other entitlements have been repealed once they’ve been passed. (RELATED: How are they fooling you today? Find out at Disinfo.news)

Fine. But there are proposals on the table that will allow changes to be phased in gradually, in steps that would accomplish the overarching goal of repealing and replacing Obamacare. These measures could – and frankly should – take a few years to enact, giving Americans and the healthcare industry time to respond and adjust to them.

But claiming that repeal “can’t be done” by the GOP majority alone is not only dishonest, but is also a means of justifying inaction on a law that is literally breaking health insurers and average Americans, financially speaking.

Obamacare must go. The Republicans (and Trump) promised. They don’t need the Democrats to do it. Time to deliver.