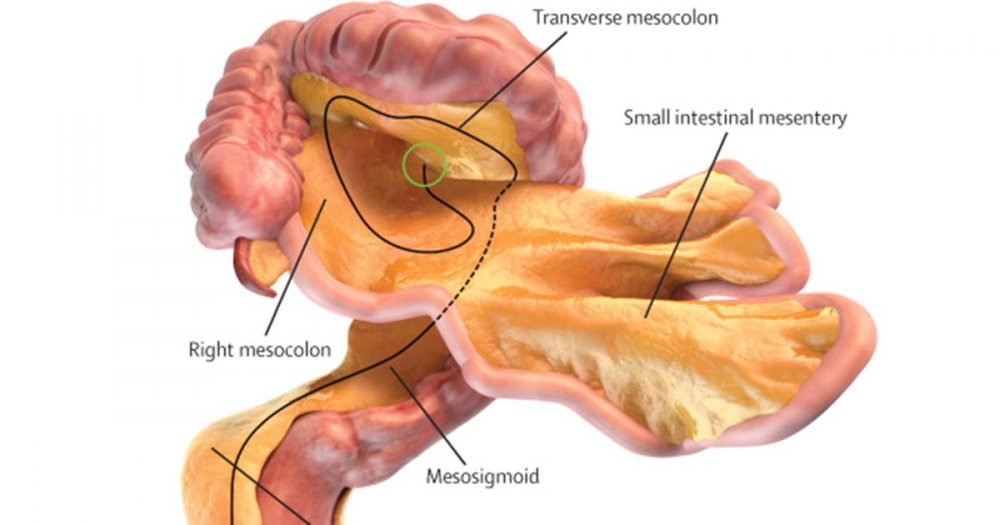 A previously unknown organ has been identified in the human abdominal cavity that researchers from the University of Limerick in Ireland have dubbed the mesentery, the body’s 79th organ. A double fold of skin lodged neatly throughout the gut, the mesentery basically serves as a link to connect all the various organs in the abdomen together, including the stomach, small intestine, and colon, in one consecutive piece so that they can correctly perform their respective functions.

The mesentery is nothing new, of course — the human body has always had one But this is the first time that this particular stretch of tissue has been afforded its own title, at least officially, and been differentiated as its own unique organ. Following in the tradition of none other than artist and painter Leonardo da Vinci, who was far ahead of his time when he visually portrayed the mesentery as a single contiguous organ, Dr. J. Calvin Coffey, foundation chair of surgery at the University of Limerick and the man credited for coming up with this new development, has offered up fresh research to show why the mesentery deserves its own designation.

The latest edition of the respected medical textbook Gray’s Anatomy reveals how the mesentery functions as one continuous organ, piecing together the peritoneum, fascia, and intestines. It serves as the functional link between the organs that comprise the gut and the rest of the body, helping to carry blood and lymphatic fluid between the two. The mesentery also maintains the position of the intestines so that they remain properly connected to the abdominal wall without actually being in direct contact with it.

“Without a mesentery to keep the intestine connected, the intestine would have to attach directly to the body wall,” Coffey, also a professor, is quoted as saying by CNN. “It is unlikely that it would be able to contract and relax along its entire length if it were directly in contact. It maintains the intestine in a particular conformation, ‘hitched up,’ so that when you stand up or walk about, it doesn’t collapse into the pelvis and not function.”

But this is just one of the many roles that the mesentery plays in keeping the human body functioning as it should. Researchers are sure that the mesentery also performs many other vital functions in terms of the vascular, endocrine, cardiovascular, and immunological systems, though they can’t say for sure exactly what these are. To find out, more research is needed, and that is exactly what Prof. Coffey and his colleagues plan to do.

“Now we have established anatomy and structure. The next step is function,” Coffey told BBC News. “If you understand the function you can identify abnormal function, then you have disease. Put them all together and you have the field of mesenteric science.”

Part of the reason why it has taken so long to properly identify the mesentery has to do with its shape, which exhibits a type of spiral formation packaged neatly along the spinal trajectory. Almost resembling a traditional Chinese fan, the mesentery has perplexed scientists for many years, especially when it was previously thought that the mesentery was some kind of matrix of many smaller parts as opposed to a single, unified organ.

“The current anatomic model is elegant and simple and will help students understand this structure,” Coffey says, noting that the mesentery has traditionally been regarded as a “complex field… It will also provide them with a new perspective from which to view other organs in the abdomen.”