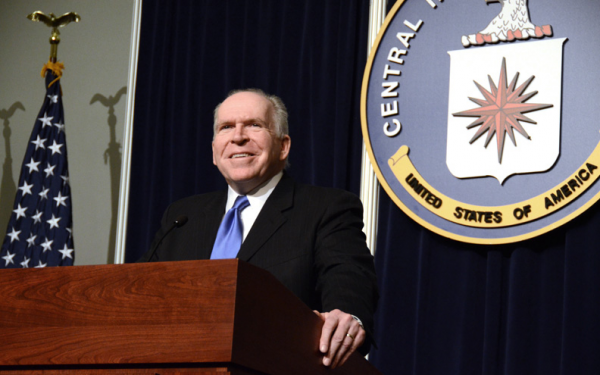 To the casual observer, President Donald J. Trump is a threat to national security, a friend of Russian President Vladimir Putin, and is not a legitimate president because Russia “hacked the election” to help him defeat Democratic nominee Hillary Clinton.

At least, that’s what careerists within the U.S. intelligence community want us to think. That’s why they’ve been working so hard to undermine the president-elect and delegitimize his victory: They much preferred Clinton and worked behind the scenes to help her win, according to investigative journalist Glenn Greenwald.

Why? Because they knew that Clinton, as president, would continue pursuing the same geopolitical objectives as the CIA and the Deep State.

In an expansive report, Greenwald claims that the Deep State is not only a real thing, but that it is agitated by Trump’s unexpected victory and nervous that his foreign policy will conflict with its globalist vision of perpetual war, agitation and foreign involvement. (RELATED: Find out the latest on the Deep State and the intelligence community at NationalSecurity.news)

He further noted in his report, published by The Intercept, that Clinton had signaled her opposition to President Obama’s lack of enthusiasm for deepening U.S. involvement in Syria, as well as his reluctance to confront Russia. Intelligence community careerists also favored Clinton’s preference for deepening divisions with Moscow, while Trump has said that he wants to improve relations with Putin.

In anticipation of policy changes under Trump, the Deep State is “using classic Cold War dirty tactics and the defining ingredients of what has until recently been denounced as ‘Fake News,’” Greenwald wrote.

In this, intel operatives’ most valuable tool is the establishment media, which instinctively sides with and reveres these hidden intelligence officials. The effects of these tactics are being magnified by Democrats who are still in disbelief over Trump’s victory and are clinging to anything and everything that maligns Trump and his team – no matter how unhinged and delusional it makes them seem.

This, of course, includes embracing the recently leaked 35-page “Trump dossier,” which Greenwald said was written by a former intelligence operative working on behalf of Democrats and #nevertrump establishment Republicans. (RELATED: Keep up with all the news on the president at Trump.news)

Greenwald sees “serious dangers posed by a Trump presidency,” adding that there is a “wide array” of effective, legitimate tactics to combat those threats. They include bipartisan congressional coalitions, constitutional challenges to Trump actions, and citizen uprisings with sustained, “aggressive civil disobedience.” But this assumes that a) Trump actually poses “serious dangers” to the country, and b) that he will be as corrupt as the Obama administration.

To the Deep State, none of this political business will matter. All that matters is what Trump does in relation to their agenda: Does he stay the course or does he deviate? And will the deviation cost the Deep State in terms of influence and power?

In this vein, Greenwald warns that Democrats and #nevertrump types cheering on the CIA – which is using in a domestic capacity the same kind of misinformation and propaganda tactics it has used for years against legitimate U.S. enemies – is in and of itself dangerous:

Empowering the very entities that have produced the most shameful atrocities and systemic deceit over the last six decades is desperation of the worst kind. Demanding that evidence-free, anonymous assertions be instantly venerated as Truth — despite emanating from the very precincts designed to propagandize and lie — is an assault on journalism, democracy, and basic human rationality. And casually branding domestic adversaries who refuse to go along as traitors and disloyal foreign operatives is morally bankrupt and certain to backfire on those doing it.

Having the establishment media on board with all of this deceit is equally dangerous. As Greenwald notes, if or when the Trump administration commits an illegality or unconstitutional act, no one will believe the reports because they will assume that the media’s reporting will be more bogus, fake news. (RELATED: See the latest in media chicanery at NewsFakes.com)

How can we know that the Deep State and the CIA threw in with Clinton? For months prior to the election their actions were obvious, Greenwald says. In August, former acting CIA Director, Michael Morell, endorsed Clinton in a New York Times piece, claiming that Russia had recruited Trump “as an unwitting agent of the Russian Federation.”

Then, retired Gen. Michael Hayden, who ran the CIA and the NSA under President George. W. Bush, wrote in the Washington Post that Trump was Putin’s “useful fool” and a “naif.”

Mind you, these men came out in support of Clinton, the most obviously compromised presidential candidate in modern history, just because they believe she would have furthered the Deep State’s interests. Personally, they couldn’t care less if her election would have compromised American security, so long as the CIA’s objectives were met.