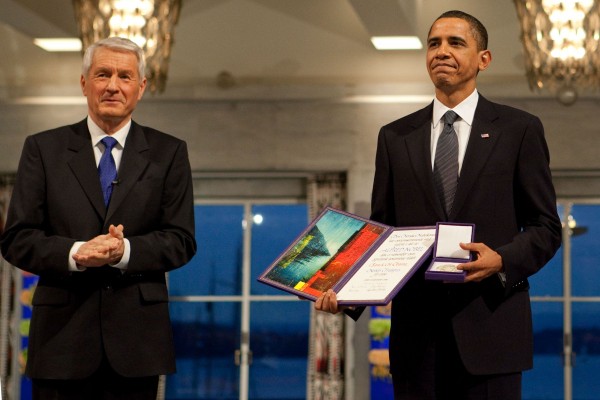 Just a few months into Obama’s first term in office, the Norwegian Nobel Committee felt the need to ingratiate itself with America’s first black president. So the panel awarded President Barack Obama with a peace prize based not on anything he had done, but what he might do as U.S. president.

Inaugurated in January 2009, the committee officially awarded Obama his prize in October of that year, proclaiming:

The Norwegian Nobel Committee has decided that the Nobel Peace Prize for 2009 is to be awarded to President Barack Obama for his extraordinary efforts to strengthen international diplomacy and cooperation between peoples. The Committee has attached special importance to Obama’s vision of and work for a world without nuclear weapons.

Obama has as President created a new climate in international politics. Multilateral diplomacy has regained a central position, with emphasis on the role that the United Nations and other international institutions can play. [Emphasis added]

Zero accomplishment, just lots of potential. And remember, the selection process takes months, so this committee had to have been considering giving their prize to Obama practically the same time members found out he’d won the presidency. (RELATED: Keep up with all things phony at Hoax.news)

Until that point, peace prizes had been based on actual peacemaking accomplishments. Consider that Obama’s peace prize was awarded to him on the eve of his expansion of the war in Afghanistan, making the granting of the award “absurd,” according to Simon Heffer, writing in The Telegraph in October 2009. It’s an expansion that continues to this day.

There are more examples of absurdity in the awarding of this once-prestigious prize. In 2012, for example, the award was given to the European Union, despite a year which saw widespread violent protests against austerity measures, and the looming prospect of a very hostile break-up of the union (that hasn’t happened, but has now begun with Britain’s recent vote to leave the EU).

Again, as noted that same year by The Telegraph, “The shock decision by the Norwegian prize jury was greeted with disbelief and derision, but also with some relief by supporters of the European project.”

Some analysts saw the award as a shameless attempt to shore up the institution of the EU and its currency – the euro – in the alliance’s darkest hour. At the time, Nobel committee chairman Thorbjorn Jagland warned of a potential return to the “extremism and nationalism” which led to two world wars beginning on the European continent in the 20th century.

Again, no real accomplishments, but only the pretense of accomplishment – like giving a student an “A” for effort, rather than for their actual work.

In 2008, Left-wing Keynesian and “economist,” New York Times columnist Paul Krugman, won a Nobel Prize in Economic Sciences, with the committee claiming that the award was “for his analysis of trade patterns and economic activity.”

Krugman is like a broken record when it comes to his economic “prowess.” The way to fix everything in the economy is always more government spending, despite the fact that such spending has led to a nearly $20 trillion deficit under President Obama. (RELATED: When will our debt crush us? Stay current at Collapse.news)

There is also this: Krugman once actually recommended faking an alien invasion to get Obama’s economy going:

“It’s very hard to get inflation in a depressed economy. But if you had a program of government spending plus an expansionary policy by the Fed, you could get that. If we discovered that space aliens were planning to attack, and we needed a massive buildup to counter the space alien threat, and inflation and budget consideration took secondary place to that, this slump would be over in 18 months. And then if we discovered, oops we made a mistake … There was a Twilight Zone episode like this in which scientists faked an alien threat in order to produce world peace. This time we need to ignore it to get some fiscal stimulus.”

In fact, as noted by Michael Pento of Pento Portfolio Strategies, Krugman has never seen a government spending program he didn’t like, even when said government is neck-deep in debt.

It’s clear from these and other examples that whatever prestige and intent Nobel prizes used to convey once upon a time, they have now been politicized to the point of uselessness as just another attempt to legitimize Left-wing extremists.