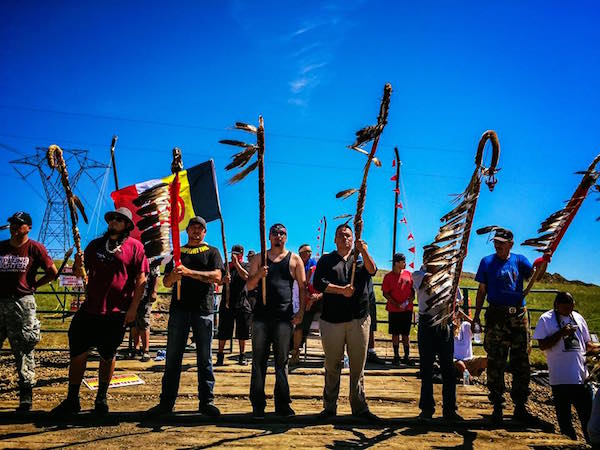 The effort to shut down the Dakota Access pipeline, recognized on social media as #NoDAPL, is not over, despite a temporary stoppage of the project by the Army Corps of Engineers, warns The Waking Times.

In December, Natural News reported that the Corps had revoked previously issued permits, meaning that the pipeline builder, Texas-based Energy Transfer Partners LP, will have to find a different route other than through areas that, should the pipeline leak or burst, would have threatened aquifers on Native American lands.

But that action has not stopped the project altogether, activists and environmentalists are warning. This year is likely to be very crucial to the pipeline’s future, as President-elect Donald J. Trump signaled during his campaign that he would not only approve the Keystone XL pipeline, but that he supports the completion of the DAPL as well, as part of his policy goal of making the United States far less energy-dependent on volatile countries.

Some argued that the energy firm building the pipeline would simply ignore the Army Corps of Engineers’ permit revocation and continue moving forward anyway. That’s not likely, however, given that the company would lose millions in the resultant court battle that would surely follow.

That said, there is nothing to say that the incoming Trump administration won’t pressure the Corps to revise its position and re-issue permits to Energy Transfer Partners, a much likelier scenario given the president-elect’s energy policy objectives.

Protesters and activists who have set up camps close to the project in North Dakota, near Sioux Nation land, say the Corps’ actions could also be lulling people into a false sense of security. After all, there are billions of dollars at stake, both in seeing the pipeline through to completion, and the oil that will flow through it to refineries once it is completed.

“Before going further, however,” The Waking Times reports, “it is worth revisiting the legal facts of the Standing Rock / DAPL issue, since there was so much emotion, disinformation and confusion surrounding it.”

First, while the pipeline does not actually go through Sioux Nation land, running adjacent and parallel to an older pipeline in the same area built in 1982, at one point it passes about 500 feet from Nation land. So, any spill in that region would most like affect Sioux Nation land, including underground water supplies that the Nation depends on. What’s more, the Lakota Sioux have had their water supplies poisoned through resource extraction in the past and now draw from the Missouri River; they don’t want to risk further contamination of any source of water.

Second, the claim that pipelines are safer in the transport of oil than railways and tractor-trailer rigs is technically true. But all sources of transport pose risks, and pipelines in the past have sprung leaks on a fairly frequent basis. In fact, a pipeline about 150 miles from Standing Rock leaked and spilled into a nearby creek. (RELATED: What’s happening with our environment? Keep up at Environ.news)

Third, the Army Corps of Engineers and Energy Transfer Partners have said that the Sioux Nation did not voice concerns or respond to the building of the pipeline in a timely manner, so as to negotiate and consult on the project. But “clearly there was a huge communication breakdown,” The Waking Times noted, adding that it is not clear who was at fault for that. One article, which you can find here, summarizes the situation. “When it all comes down, through [sic], the tribe was not involved in the process. Whose fault that is … well, depends on how you look at the world, really,” the site notes.

Fourth, some have claimed that there is no archaeological evidence that the pipeline is being built through Native American burial grounds, and there are more disputes concerning this argument as well. The Waking Times reported that this particular argument likely does not hold water, because shortly after the Nation submitted burial evidence to the court, the project jumped 25 miles and began digging anew with bulldozers, allegedly to eliminate evidence.

Finally, project planners allegedly broke a number of laws in the run-up to the project getting underway, The Waking Times claims. “The main way they skirted the lasw,” the site noted, “was by engaging in segmentation (breaking up the project into lots of shorter projects in order to get more favorable legal treatment).” DAPL was allegedly being pushed through without a required Environmental Impact Statement.

Whether the Trump administration goes ahead and reauthorizes DAPL along its original corridor, or forces the company building it to find another route, remains to be seen. But one way or another, it appears likely the pipeline will be built.