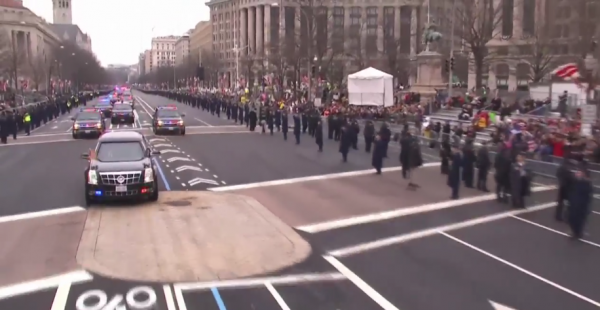 When Donald J. Trump became President-elect Trump, at first those on the political Left were completely stunned. They couldn’t believe that their anointed candidate, the criminally corrupt Hillary Clinton, would lose to a billionaire businessman with a comical coif who once hosted a reality TV show.

However, after the initial shock, Trump’s victory made the Left angry, and their “leaders” – in the entertainment industry, the news media and financiers behind the scenes like George Soros – have vowed to “stop Trump” any way they can, because they have come to the conclusion that only their social, political and scientific beliefs are valid.

But like their recently failed president, Barack Obama, the Left hasn’t been very successful in stopping Trump or his supporters from marching forward. Despite repeated vows to “Dump Trump,” the Left has failed in each and every frantic, breathless, unhinged threat. (RELATED: Keep up with our new president at a website just for him: Trump.news)

— Just a few weeks after the Nov. 8 election, the angry Left attempted to get electors pledged to cast ballots for Trump to change them – to Clinton, to Sanders, to someone other than Trump – because after all, he didn’t win the popular vote (which doesn’t matter in our system, and all because of one state: California).

They failed. When electors met in their respective state capitals December 19, they did their duty, with the majority of them (306) casting their ballot for the electoral winner, Trump.

— In the weeks leading up to Inauguration Day, Left-wing Democrats, with their allies in the establishment media, attempted to discredit Trump with fake news and phony “intelligence” claiming that “Russia hacked the election,” and as such, Trump is “not a legitimate president.” They also pushed the false narrative that Trump and Russian President Vladimir Putin are bosom buddies, and that the latter implored his intelligence services to propagandize against Clinton by feeding propaganda to hundreds of “alt-right” news sites.

They failed. Most Americans didn’t buy the lies, and still don’t.

— Also in the run-up to Inauguration Day, Left-wing groups under the hashtag umbrella #DisruptJ20 threatened to disrupt the president-elect’s swearing-in ceremony by shutting down all access to the parade route, the White House, the Capitol and the post-inaugural parties.

They failed. Trump was inaugurated on time and in peace, and the hundreds of thousands of Americans who flocked to the nation’s capital to witness the 45th president take his rightful place as leader of the free world got to see what they came to see, in relative peace.

In fact, the only thing the Left has been successful in accomplishing is remaining angry and childish for far longer than people who aren’t deranged and are completely rational.

John Hayward at Breitbart labeled the anti-Trump protests during the inaugural appropriately: Loserpalooza. (RELATED: Keep track of the chaos the Left will continue to cause at Collapse.news)

Hayward went on to skewer the utter hypocrisy of the angry Left and their supporters for:

Complaining about alleged totalitarianism (from a president who has barely spent a couple of days in office) when they themselves are totalitarian;

The insanity of Michael Moore;

Demanding peace, while inciting violence against Trump supporters, and so on.

The “tolerant” Left is anything but, as anyone who tries to wear Trump clothing and paraphernalia in public quickly discovers; they are verbally and physically attacked, though the discredited establishment media repeats the outright lie that Trump supporters are the violent ones.

The angry Left isn’t going to let Trump have the same opportunity to govern that the Right afforded President Obama – that much is obvious. In fact, bashing Trump is essentially the Left’s new political strategy. But the more childish violence the Left commits in the name of the Democratic Party, the more they will succeed in future Democratic electoral failure, as Americans bolt from the party of the insane.